In That Hour It Begun 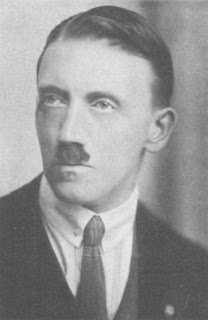 Taken from "The Young Hitler I knew" by August Kubizek 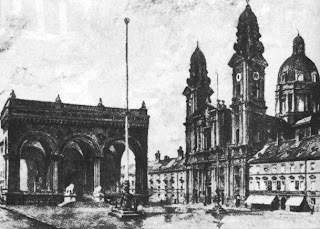 "It was the most impressive hour I ever lived through with my friend. So unforgettable is it, that even the most trivial things, the clothes Adolf wore that evening, the weather,are still present in my mind as though the experience were exempt from the passing of time.

Adolf stood outside my house in his black overcoat, his dark hat pulled down over his face. It was a cold, unpleasant November evening. He waved to me impatientiy. I was just cleaning myself up from the workshop and getting ready to go to the theatre. Rienzi was being given that night. We had never seen this Wagner opera and looked forward to it with great excitement. In order to secure the pillars in the Promenade we had to be early. Adolf whistied, to hurry me up.

Now we were in the theatre, burning with enthusiasm, and living breathlessly through Rienzi's rise to be the Tribune of the people of Rome and his subsequent downfall. When at last it was over, it was past midnight. My friend, his hands thrust into his coat pockets, silent and withdrawn, strode through the streets and out of the city. Usually, after an artistic experience that had moved him, he would start talking straightaway, sharply criticizing the performance, but after Rienzi he remained quiet a long while. This surprised me, and I asked him what he thought of it. He threw me a strange, almost hostile glance. "Shut up!" he said brusquely.

The cold, damp mist lay oppressively over the narrow streets. Our solitary steps resounded on the pavement. Adolf took the road that led up to the Freinberg. Without speaking a word, he strode forward. He looked almost sinister, and paler than ever. His turned-up coat collar increased this impression.

I wanted to ask him, "Where are you going?" But his pallid face looked so forbidding that I suppressed the question. As if propelled by an invisible force, Adolf climbed up to the top of the Freinberg. Andonly now did I realize that we were no longer in solitude and darkness, for the stars shone brilliantly above us.

Adolf stood in front of me; and now he gripped both my hands and held them tight. He had never made such a gesture before. I felt from the grasp of his hands how deeply moved he was. His eyes were feverish with excitement. The words did not come smoothly from his mouth as they usually did, but rather erupted, hoarse and raucous. From his voice I could tell even more how much this experience had shaken him.

Gradually his speech loosened, and the words flowed more freely. Never before and never again have I heard Adolf Hitler speak as he did in that hour, as we stood there alone under the stars, as though we were the only creatures in the world.

I cannot repeat every word that my friend uttered. I was struck by something strange, which I had never noticed before, even when he had talked to me in moments of the greatest excitement. It was as if another being spoke out of his body, and moved him as much as it did me. It wasn't at all a case of a speaker being carried away by his own words. On the contrary; I rather felt as though he himself listened with astonishment and emotion to what burst forth from him with elementary force. I will not attempt to interpret this phenomenon, but it was a state of complete ecstasy and rapture, in which he transferred the character of Rienzi, without even mentioning him as a model or example, with visionary power to the plane of his own ambitions. But it was more than a cheap adaptation. Indeed, the impact of the opera was rather a sheer external impulse which compelled him to speak. Like flood waters breaking their dikes, his words burstforth from
him.

He conjured up in grandiose, inspiring pictures his own future and that of his people Hitherto I had been convinced that my friend wanted to become an artist, a painter, or perhaps an architect. Now this was no longer the case. Now he aspired to something higher, which I could not yet fully grasp. It rather surprised me, as I thought that the vocation of the artist was for him the highest, most desirable goal. But now he was talking of a mandate which, one day, he would receive from the people, to lead them out of servitude to the heights of freedom.

It was an unknown youth who spoke to me in that strange hour. He spoke of a special mission which one day would be entrusted to him, and I, his only listener, could hardly understand what he meant. Many years had to pass before I realized the significance of this enraptured hour for my friend. His words were followed by silence.

We descended into the town. The clock struck three. We parted in front of my house. Adolf shook hands with me, and I was astonished to see that he did not go in the direction of his home, but turned again towards the mountains.

"Where are you going now?" I asked him, surprised. He replied briefly, "I want to be alone."

In the following weeks and months he never again mentioned this hour on the Freinberg. At first it struck me as odd and I could find no explanation for his strange behavior, for I could not believe that he had forgotten it altogether. Indeed he never did forget it, as I discovered thirty-three years later. But he kept silent about it because he wanted to keep that hour entirely to himself. That I could understand, and I respected his silence. After all, it was his hour, not mine. I had played only the modest role of a sympathetic friend.

In 1939, shortly before war broke out, when I, for the first time visited Bayreuth as the guest of the Reichs Chancellor, I thoughtl would please my host by reminding him of that nocturnal houron the Freinberg, so I told Adolf Hitler what I remembered of it, assuming thatthe enormous multitude of impressions and events which had filled these past decades would have pushed into the background the experience of a seventeen year old youth. But after a few words I sensed that he vividly recalled that hour and had retained all its details in his memory. He was visibly pleased that my account confirmed his own recollections.

I was also present when Adolf Hitler retold this sequel to the performance of Rienzi in Linz to Frau Wagner, at whose home we were both guests. Thus my own memory was doubly confirmed. The words with which Hitler concluded his story to Frau Wagner are also unforgettable forme. He said solemnly, "In that hour it began." 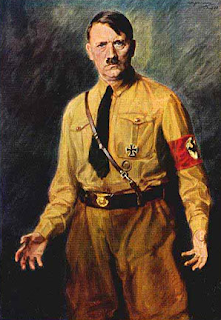