Ainulindalë is a Folk project from France. Inspired by the writtings of Tolkien. Their music is composed by acoustic guitars, flute, violin, male & female vocals & choirs, including a large group of musicians. Their new album "Nevrast" is out now. You can hear it on its entirety below.

To support the band you can buy the album here :
http://ainulindale.bigcartel.com/

Fascist image, Spartan Order & The Death of The West 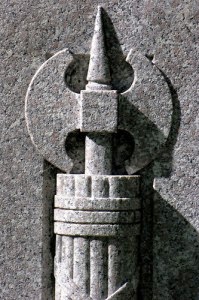 "The defeat of fascism should not make us forget that the image exists, that it still remains grand, and that others may find it again under new names. The very term fascism will no doubt founder, because it is too freighted with calumnies, because it is lost in a sea of shadows under a malignant mist. But what does the word matter? We all know that Spartan order, Spartan man, is the sole shield that will remain when the shadow of death rises before the West. Lenin prophesized that fascism would be the last form taken for survival by the societies that do not surrender without a fight to Communist dictatorship. If the West no longer has strength, if it disappears like an old man drowns, we can do nothing for it. But if it rises to defend itself, Lenin’s prophecy will come true. Under a different name, a different face, and no doubt without any projections of the past, in the form of a child we do not recognize, the head of a young Medusa, the Spartan order will be reborn: and paradoxically, no doubt, it will be the last defense of Freedom and the good life" 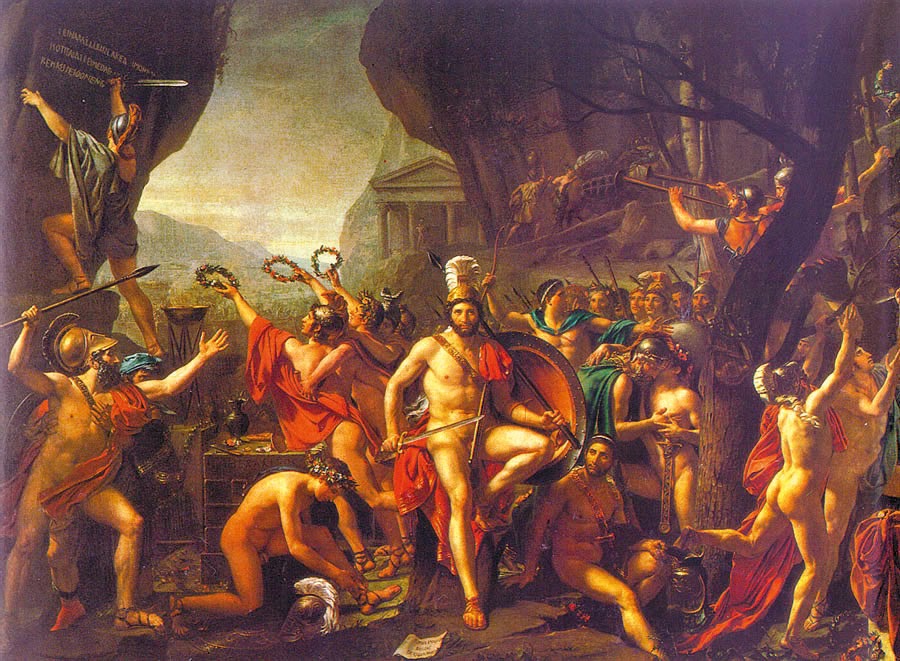 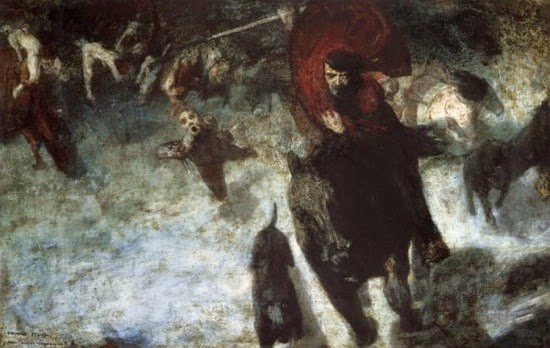 In the past, present and FOREVER : HEIL HITLER! 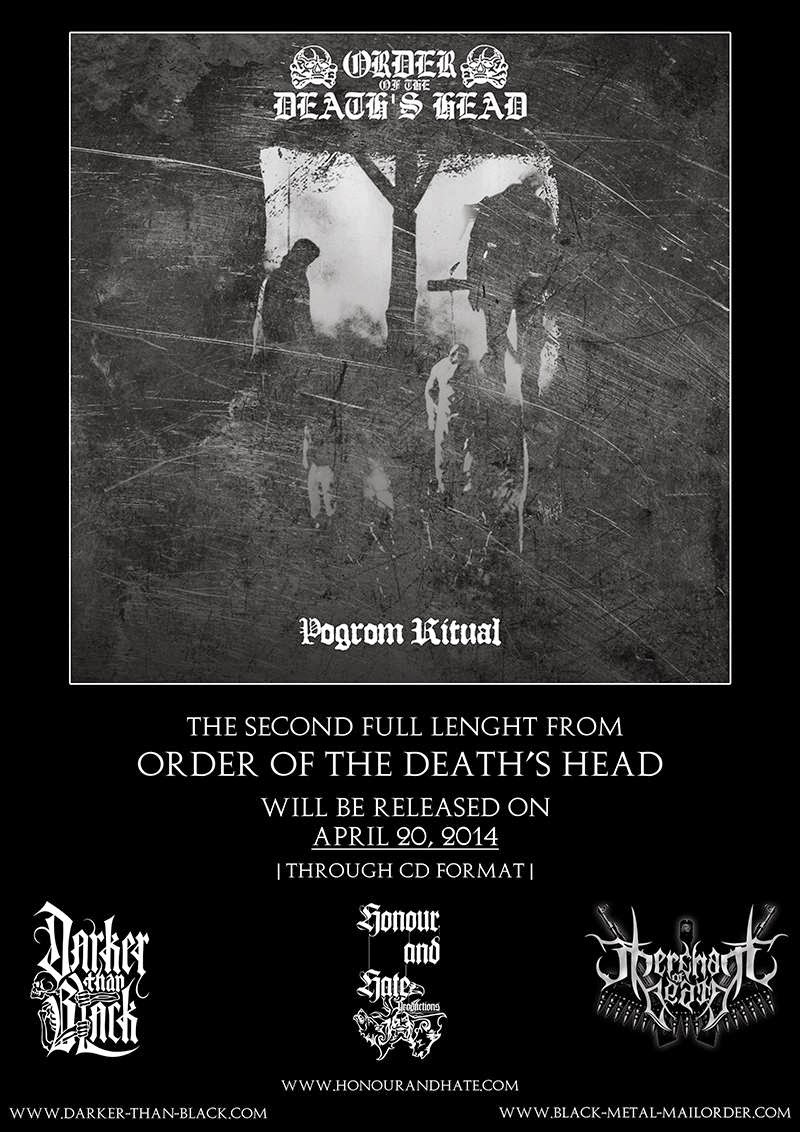 The Dark Side of The European Psyche 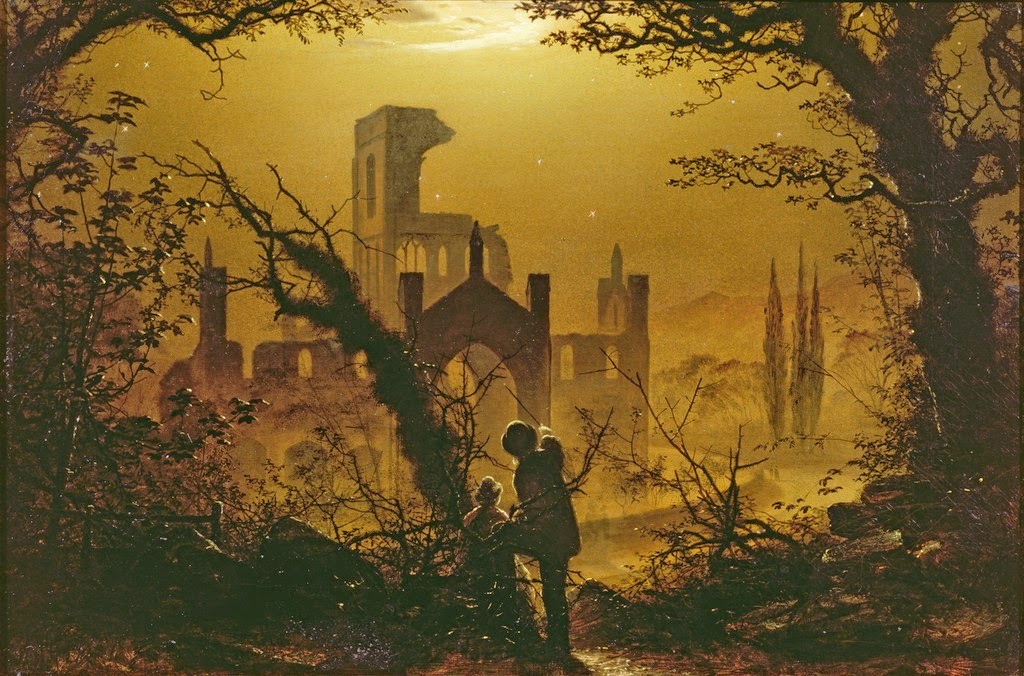 Some years ago, around that time of the year, i did a post (You gonna find it in the end of this thread) about the dark parts of the European Heritage & History. Few days ago, accidentally i found an intresting blog based on the same concept. Its creator had the very good idea to put the art (Along with the basic info) of several painters with themes inspired by the dark side of the European soul and many historical events. 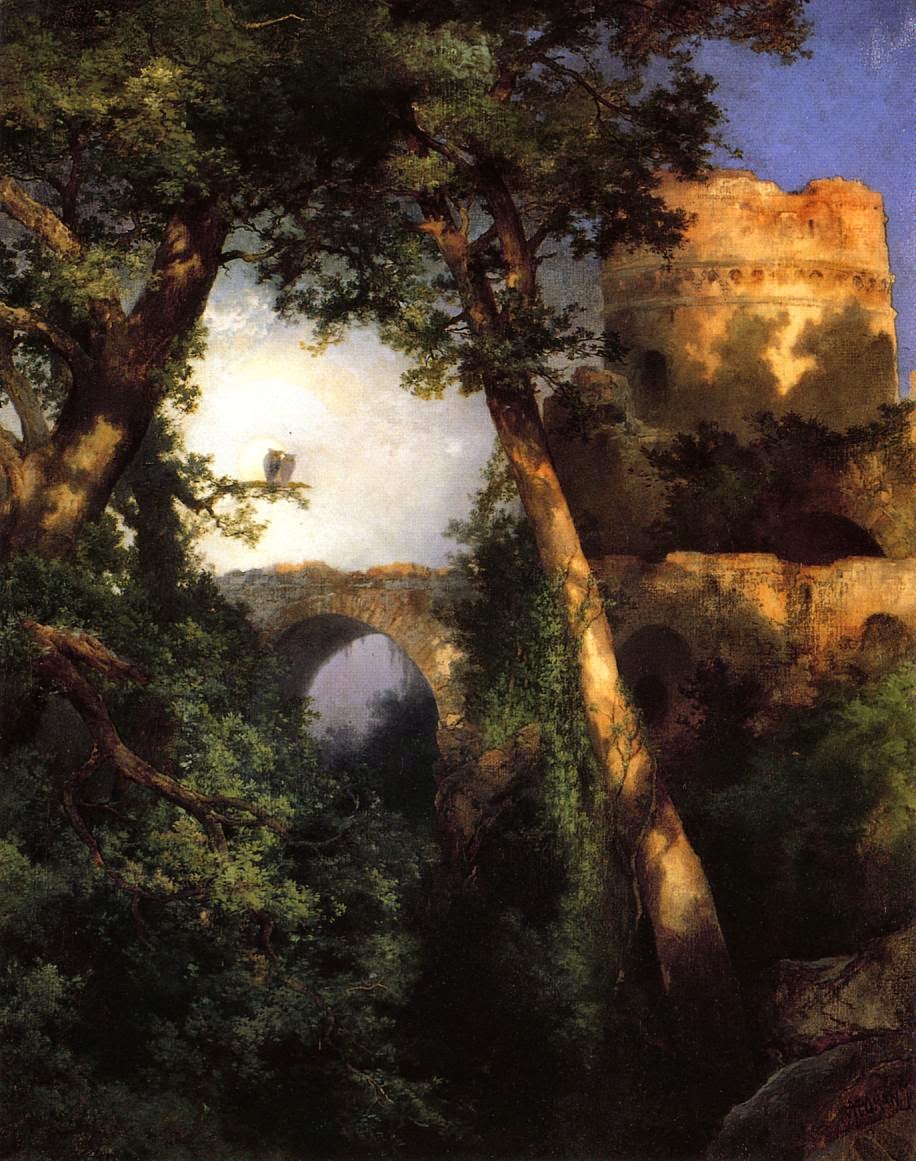 The name of the blog is DARK CLASSICS Art Gallery and the web address is:
http://darkclassics.blogspot.com

"Through the centuries artists have imagined a pallet of creatures, monsters, ghosts, witches, as a means of expressing their stories and personal impressions. At the same time, through such works they show the spirit of time and fears of people in their age.

Dark Classics is a online gallery of these artists, which contains basic information about the artworks, artist biographies and movies about them. Blog not only deals with strange creatures, but also explores the dark side of art in landscapes, portraits and abstractions.

I do not own any of these pictures. All images and texts are property of their respective owners and provided for educational purposes only. Any works posted against the wishes of the copyright owner will be removed from Dark Classics by request." 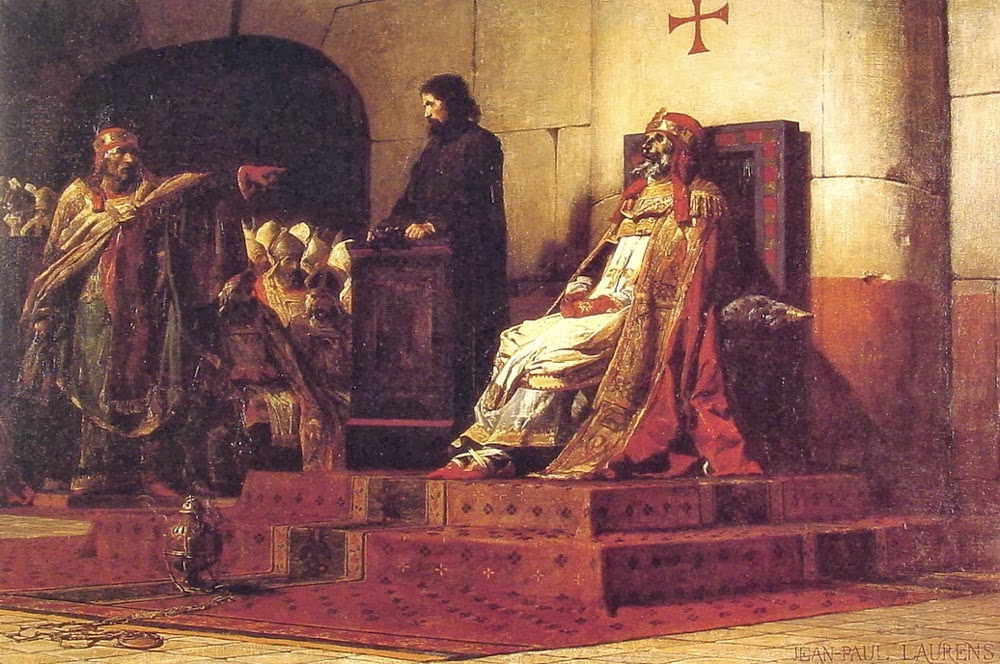 The Roosters & Blackbirds of Medinaceli

Its been sometime already since i posted about a visit , or to put it better, a pilgrimage to a historical place or monument. Thats mainly because the last time a heavy rainfall broke the photo-camera(Usually i dont have a photo camera with me. Mostly i use photos taken of the photo-camera from the people that we are going to together.Whats the point of using 2-3 cameras the same time anyway).

Coming to this thread. This time i choose to post photos from a visit that took place in a Spanish village named Medinacelli. The village is located between  Mardid and Zaragoza. In the North-West part of Spain. Watching it from distance and getting close and closer, i had a feeling that this place have something unusual and special. That day the weather was not by our side (A very annoying sun towards our faces, very few clouds and a wet atmosphere) while we were taking the turns and going up to the hills. When we arrived, our driver took-off a piece of paper, and gave us to read an article about Medinaceli. What makes a small village somewhere in Spain so special? How can you describe a place where that on its soil had walked by El Cid, Ezra Pound and Miguel Serrano?

This is what the article was about. So i decided to use some of its parts here. In between those parts i use photos that we took that afternoon. 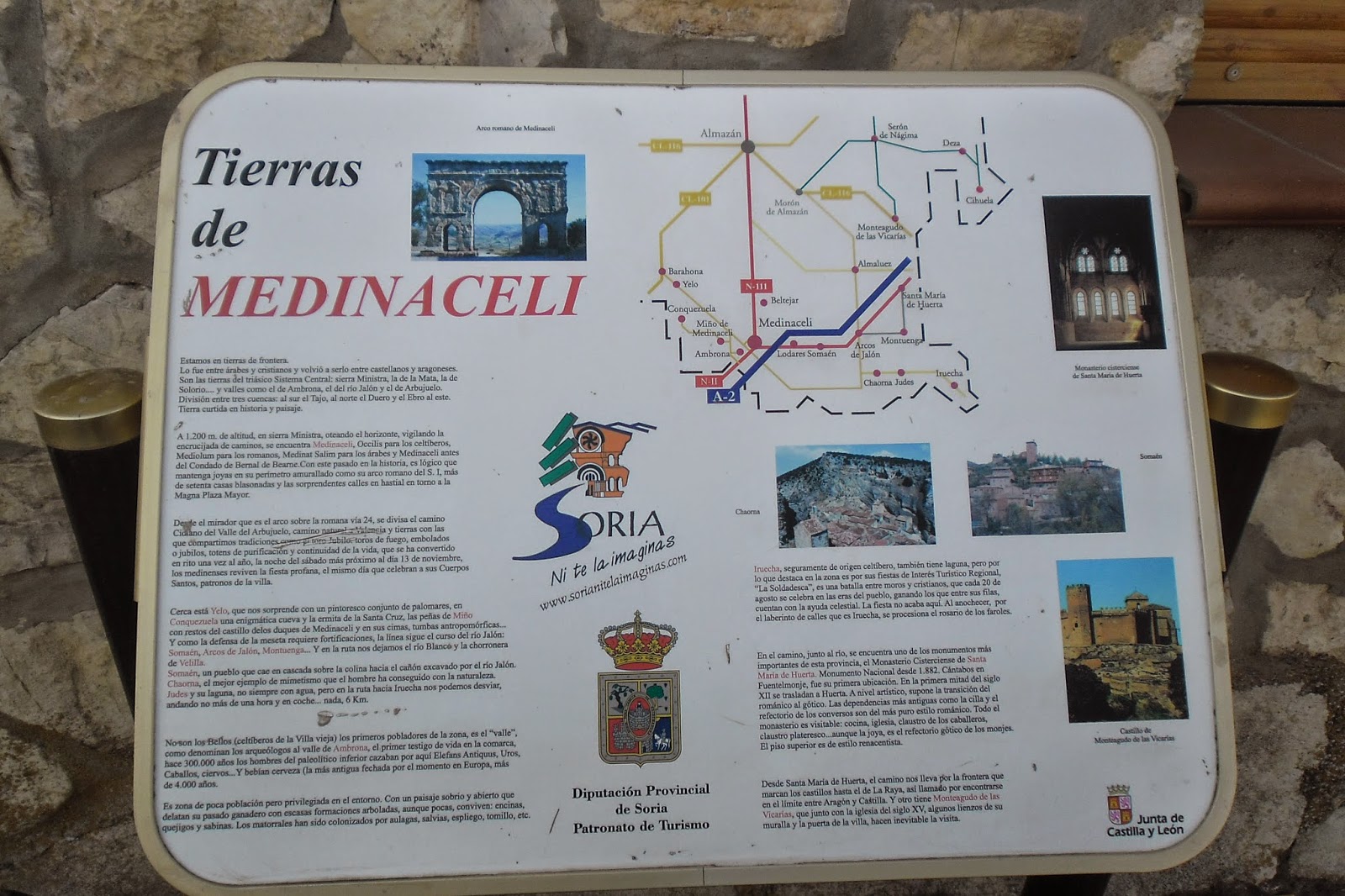 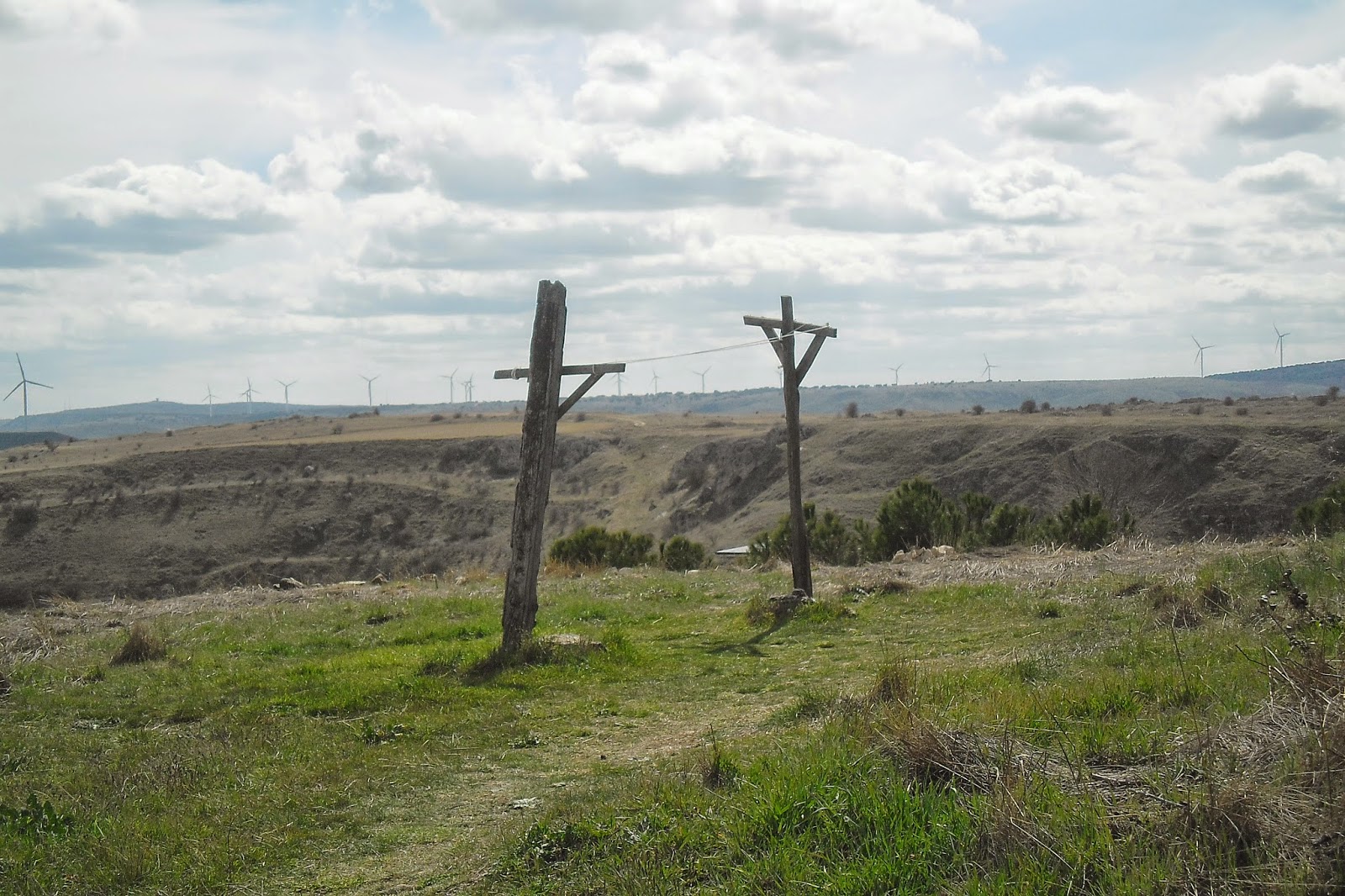 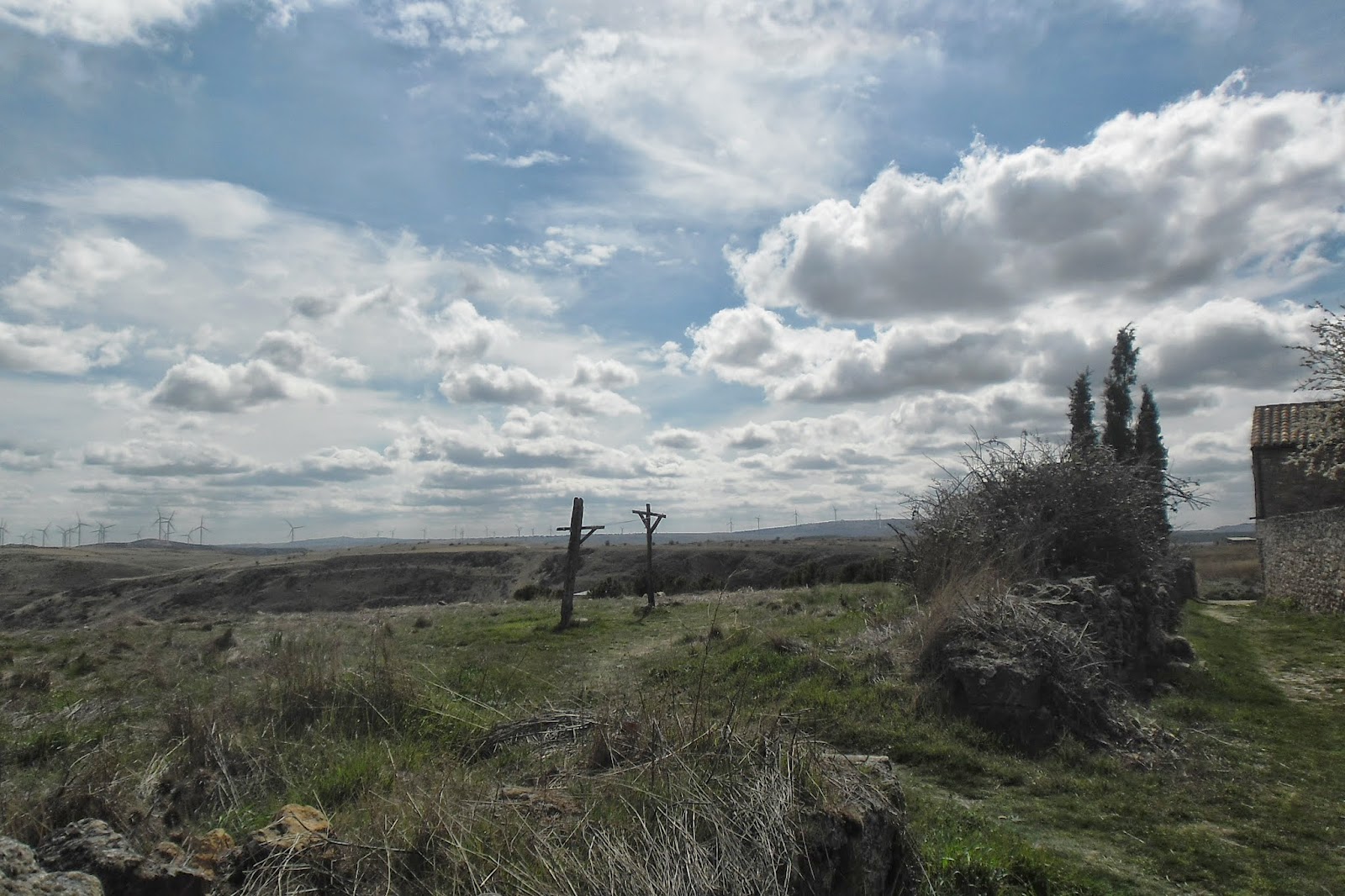 "I later carried on northwards, toward a tiny town, near Madrid—Medinaceli—, where the Cid once sought refuge during his exile—a town of stones and ruins, Roman and Visigothic, heavy with Iberian mystery, perhaps Celtic, Druidic. The town is on a steep incline, on a hill, and overlooks a dry, arid sea of grizzly, yellow, lunar waves, like a vision from a dead planet. At times, on the distant horizon, there appears a solitary tree, placed there by beauty, by that someone who takes pleasure in ordering the Castilian landscape in order to later contemplate it from the summit of Medinaceli through the old Roman Arch, remnants of an ancient fortification." 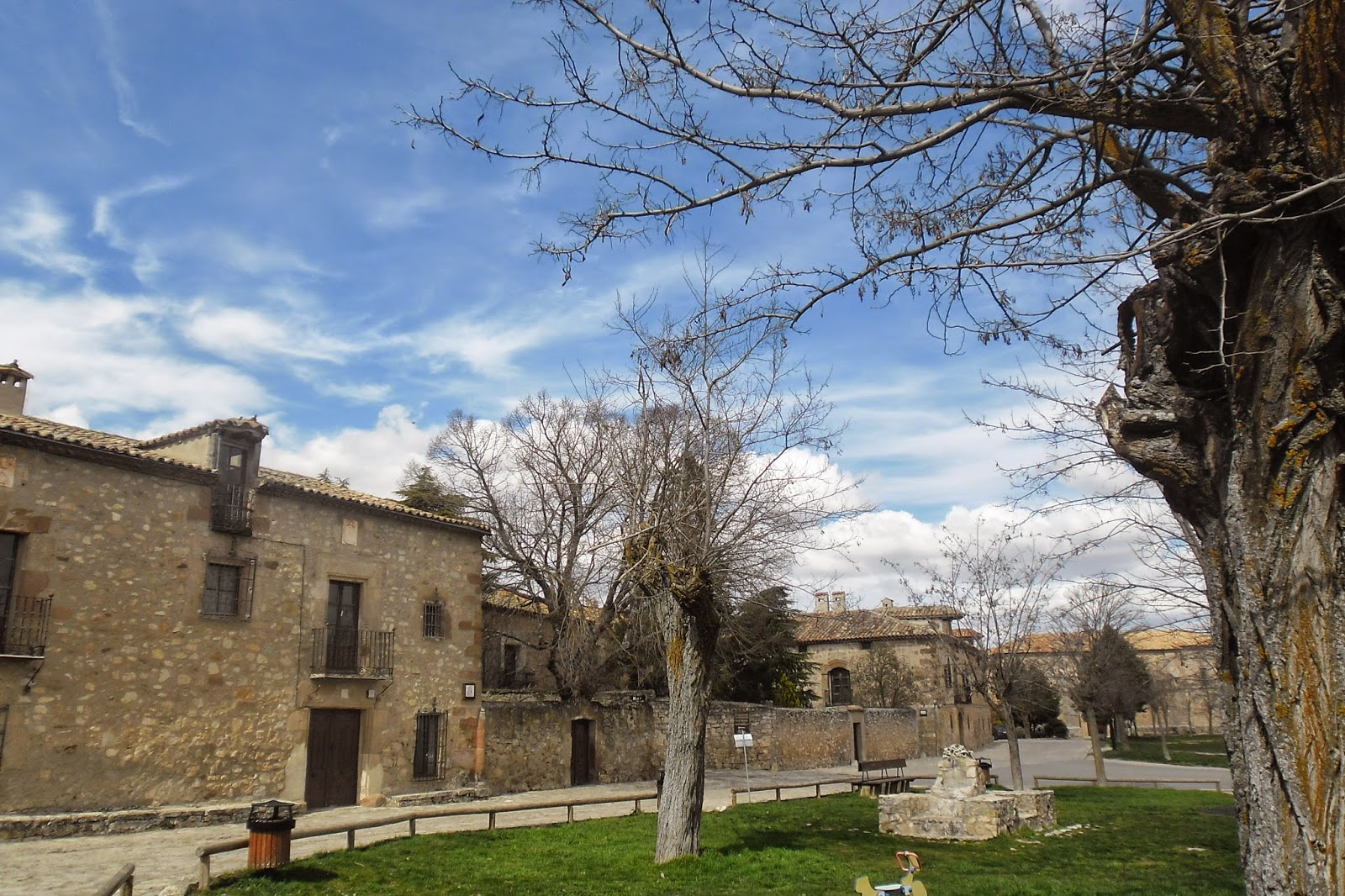 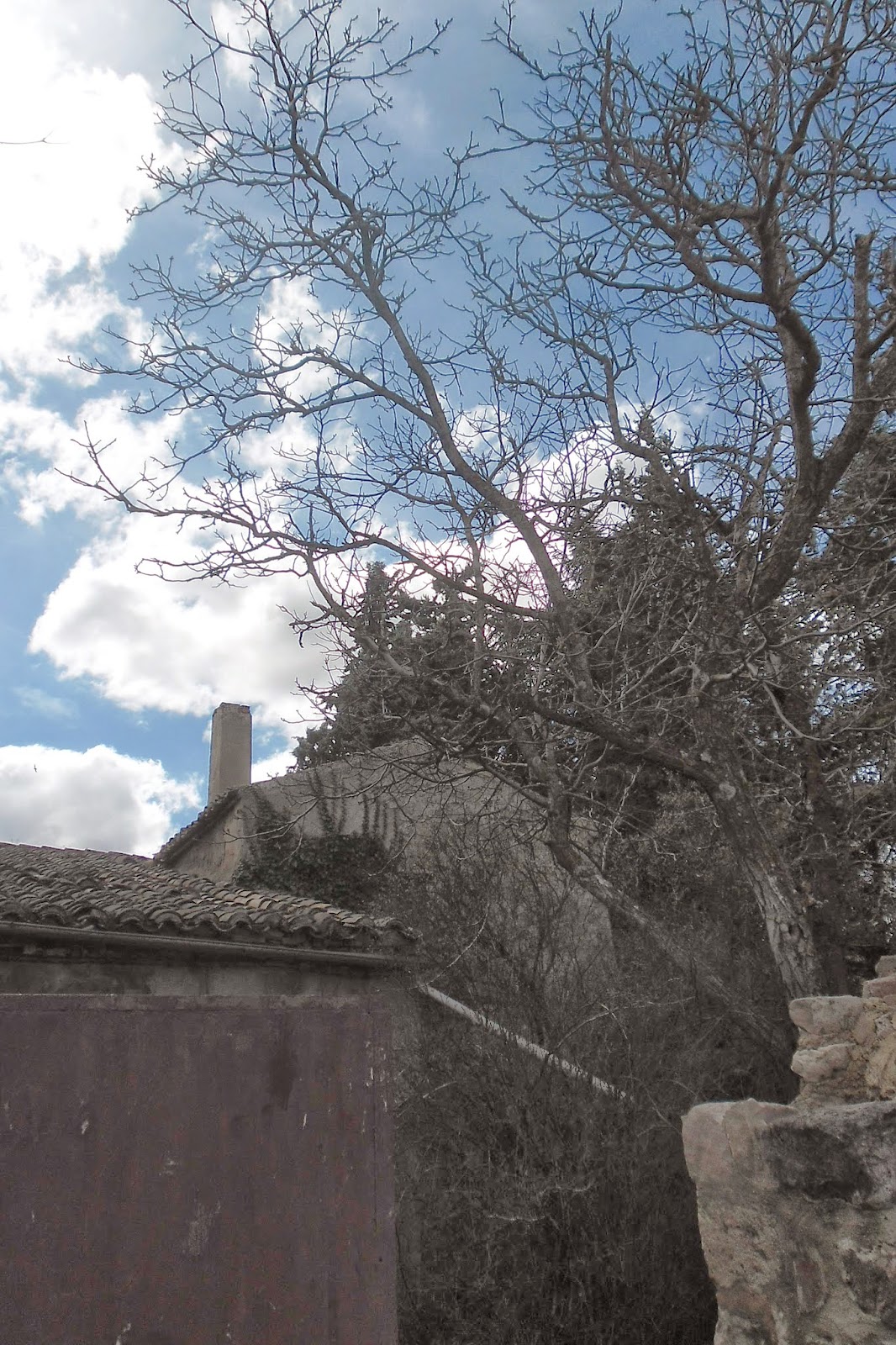 "The journalist Eugenio Montes told that during the last interview he held with the poet (Blogs Comment: He means Ezra Pound) —likely many years ago— the latter had asked him, “Do the Cid’s roosters still crow at dawn in Medinaceli?” And he added that Pound had visited Medinaceli in 1906, following the Cid’s route. Pound loved The Poem of the Cid, which he considered superior to the Song of Roland. He had visited Spain in order to retrace the Way of “The Champion”. In this way he had arrived at that small village high up in the heights, which remains as it was during the Middle Ages"

A Monument in Medinaceli 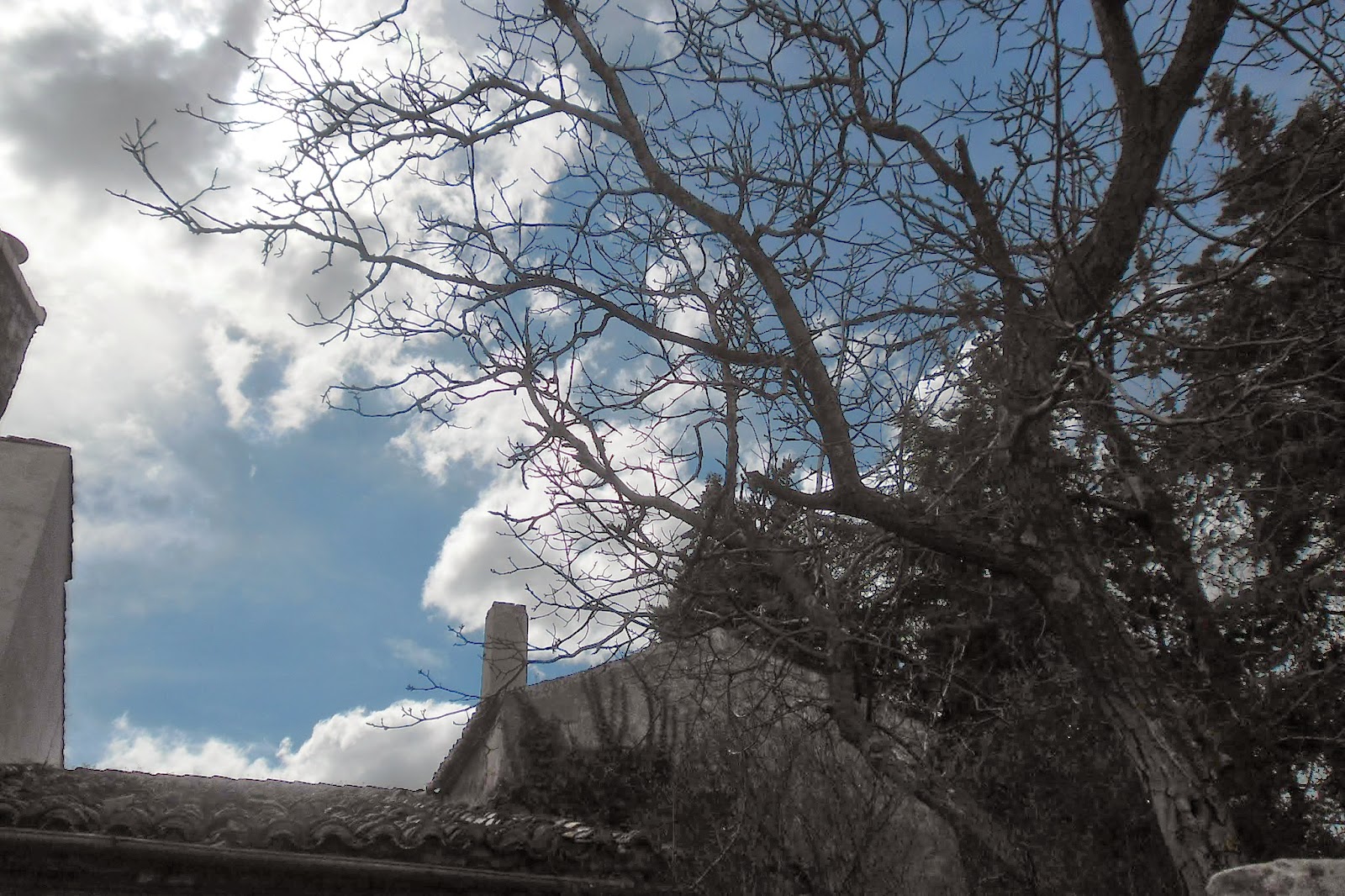 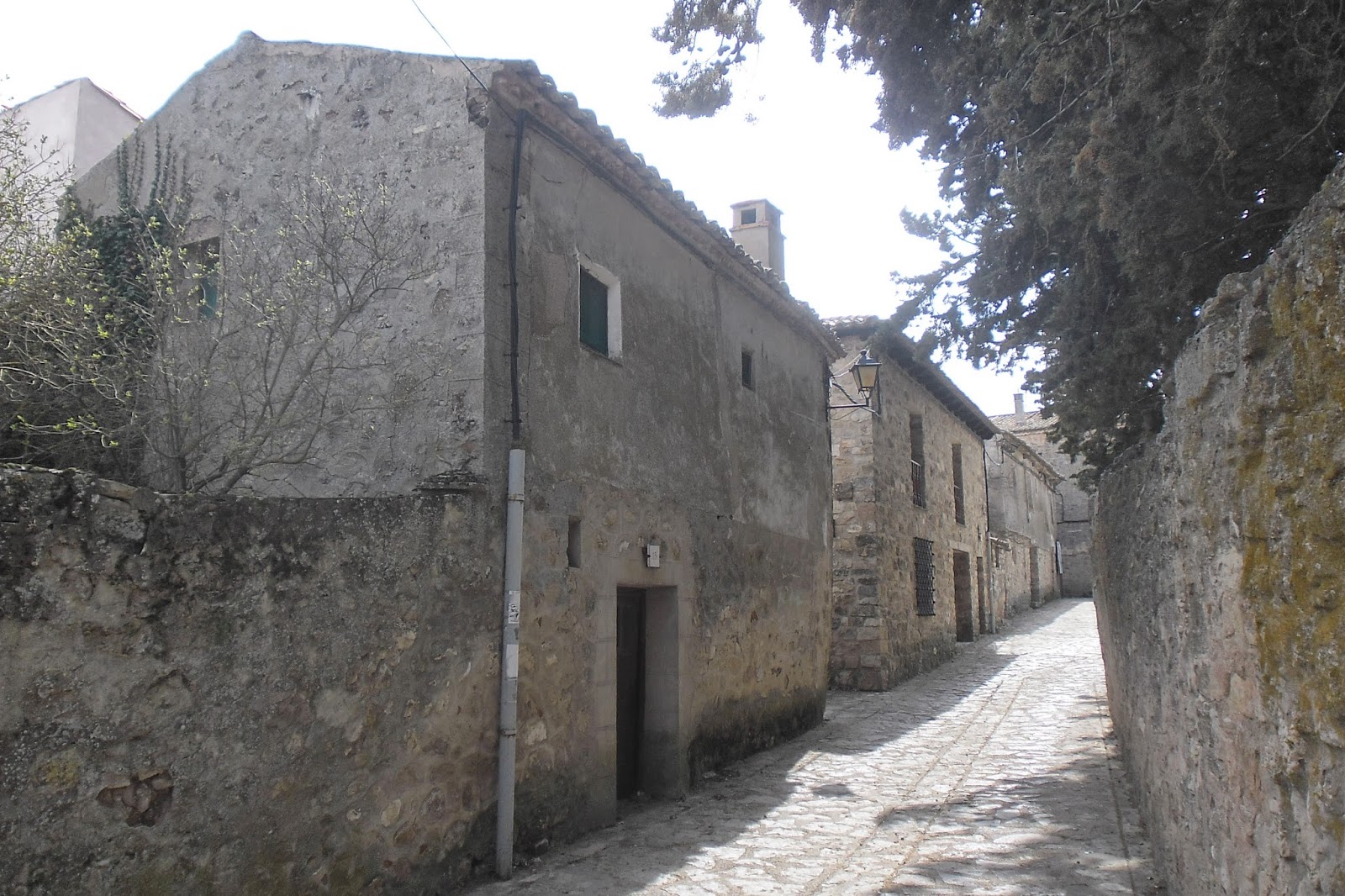 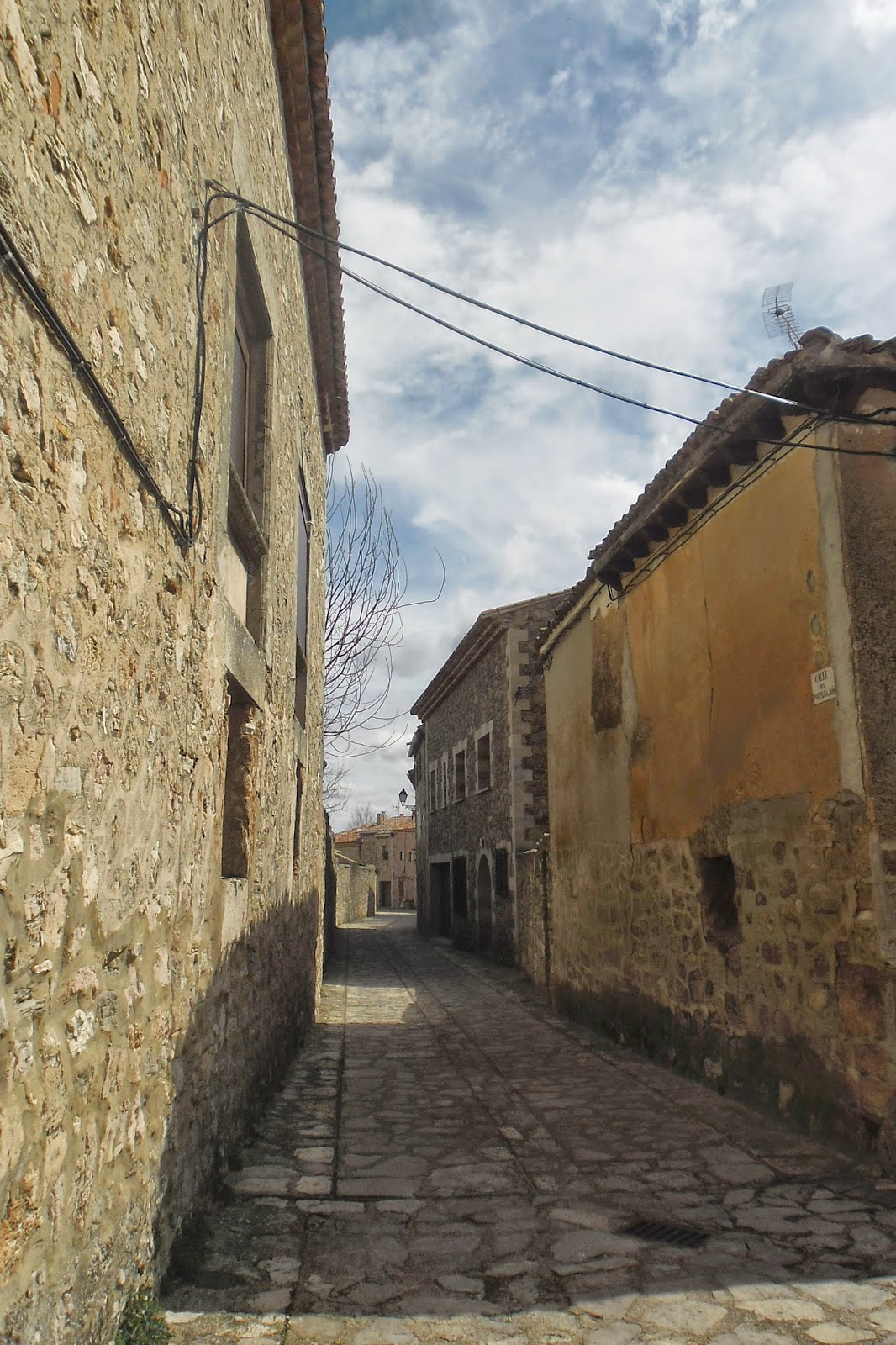 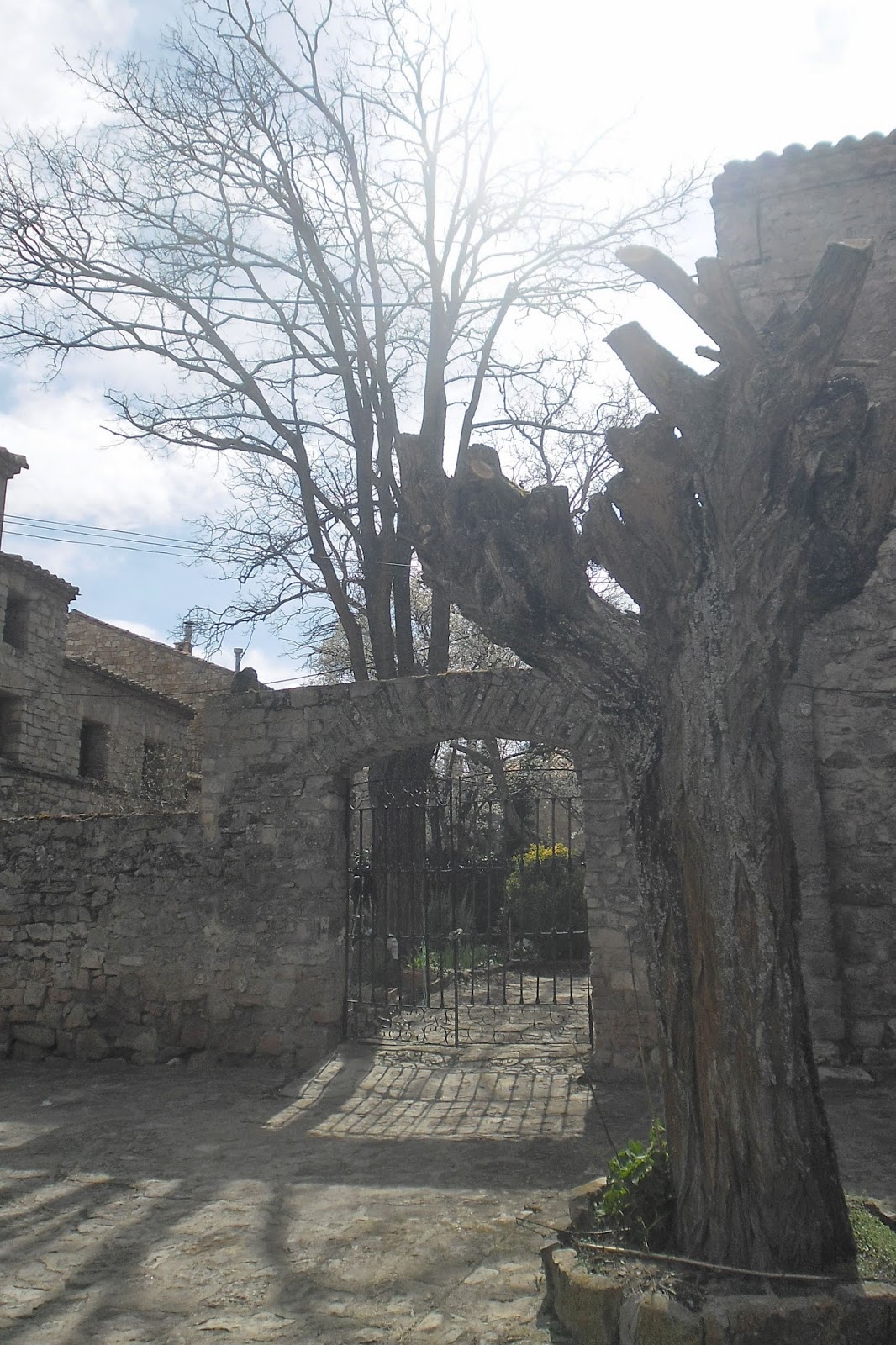 "Days later I returned to Medinaceli. I found that a man from Chile lived there, professor Fernando del Toro Garland. We talked. He also talked to me about the article by Eugenio Montes and about Pound’s words regarding the Cid’s roosters. It had occurred to him to suggest to the Spanish authorities to erect a monument to Pound in Medinaceli, which recorded there the quote from Pound and the passing through those parts, at the beginning of the century, of the great American poet. I encouraged him in his determination. From that moment we were in contact, personally or by letter. Thus I followed the ups and downs of his efforts. The town’s Spanish authorities and several friends in Madrid collaborated with enthusiasm. Carvers and stonemasons transported with their mules an enormous stone, desquamated by the millennia, from the Celt-Iberian hills, through the raw winter’s snow. Mediaeval blacksmiths forged old and simple letters to be affixed upon the stone, bearing the quote from Pound, “Do the roosters still crow at dawn in Medinaceli?”" 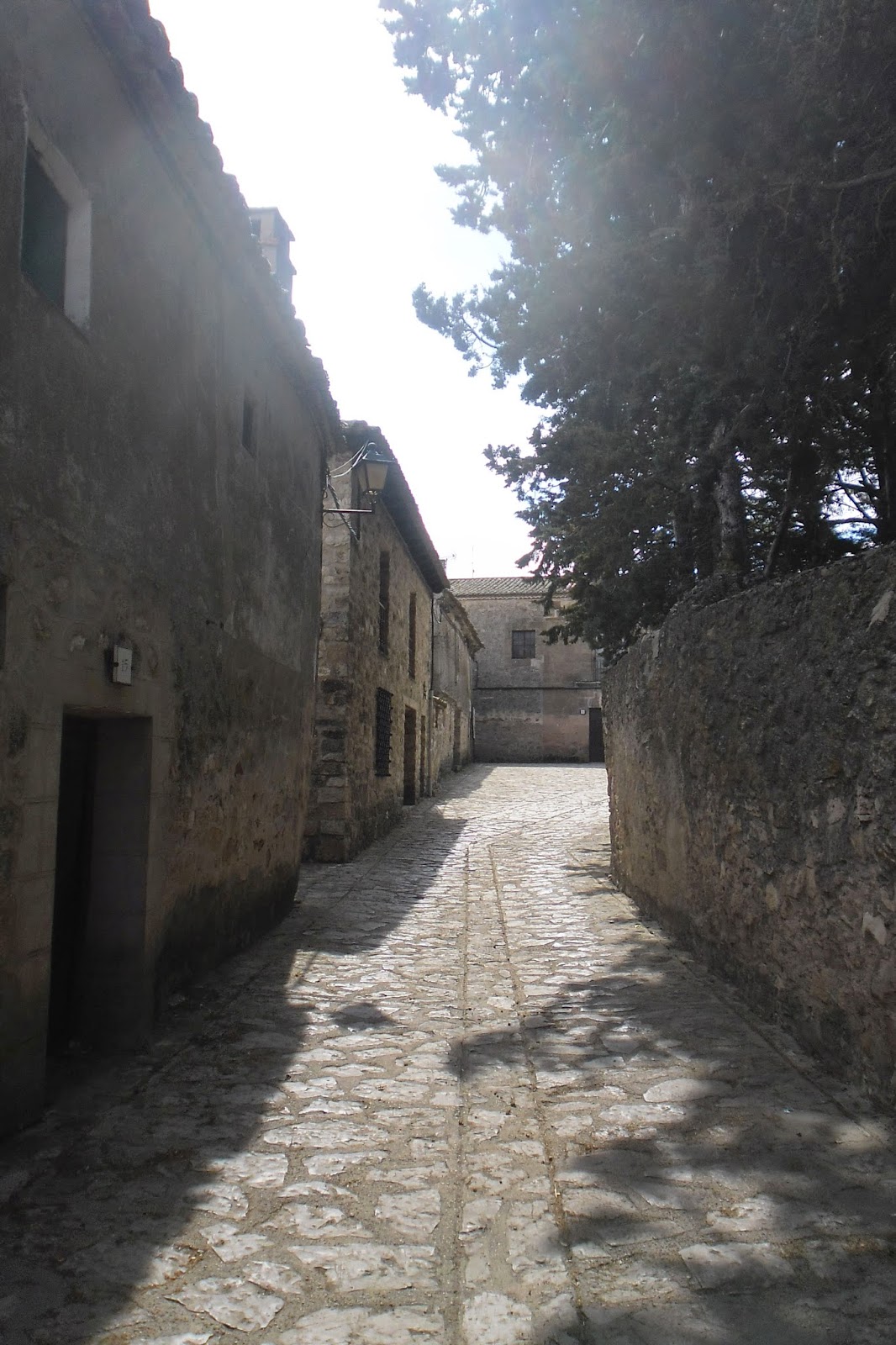 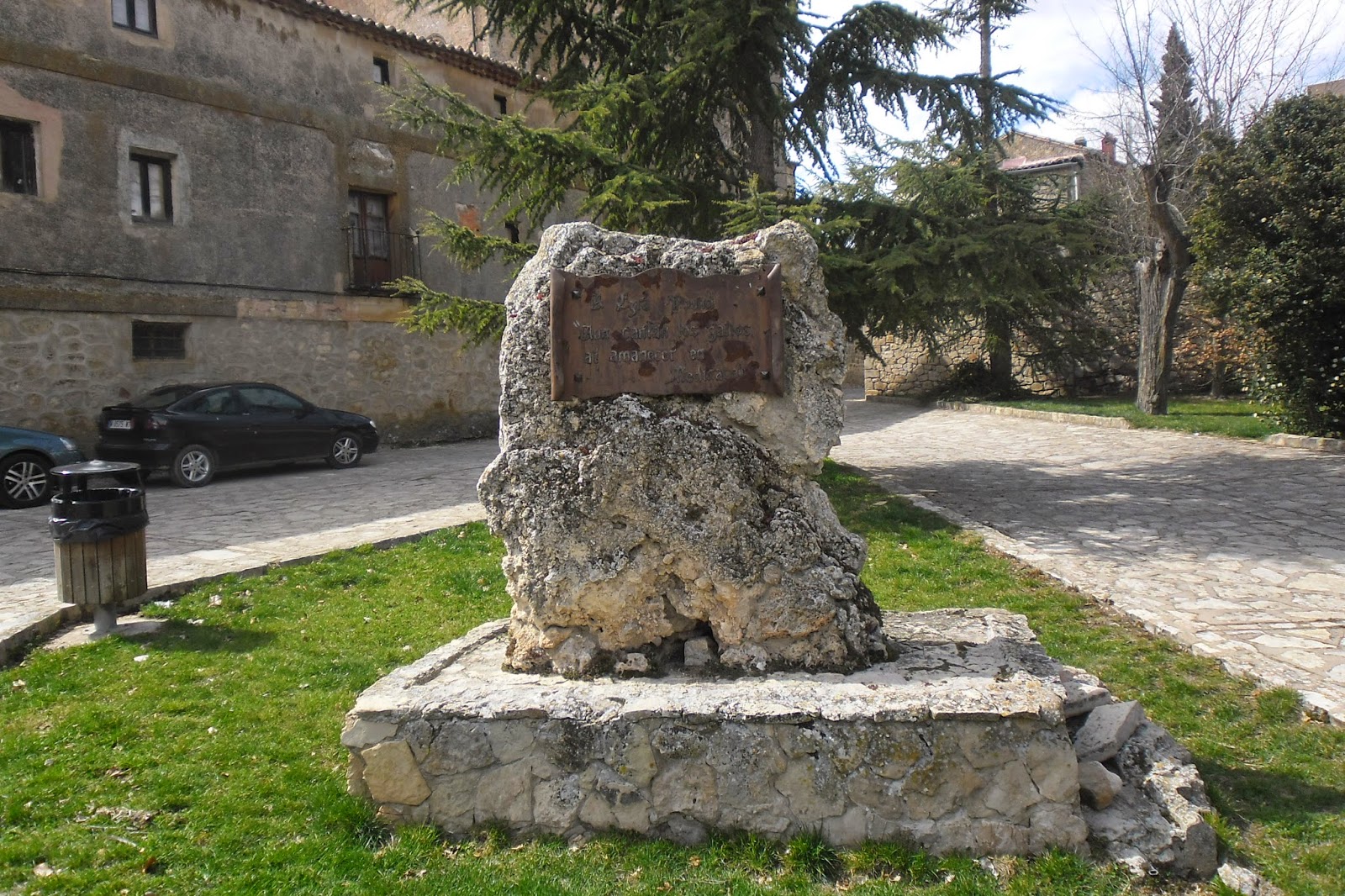 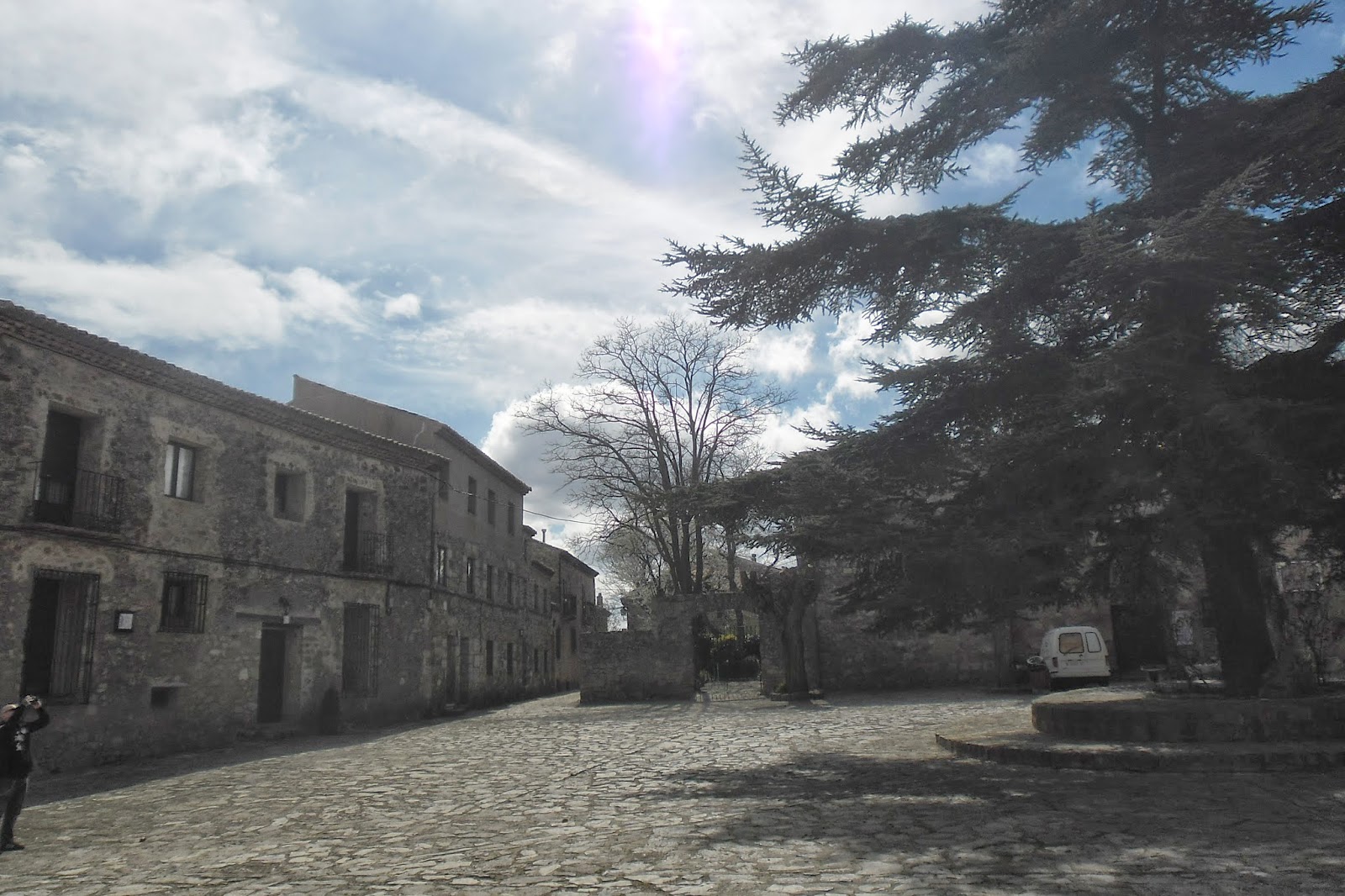 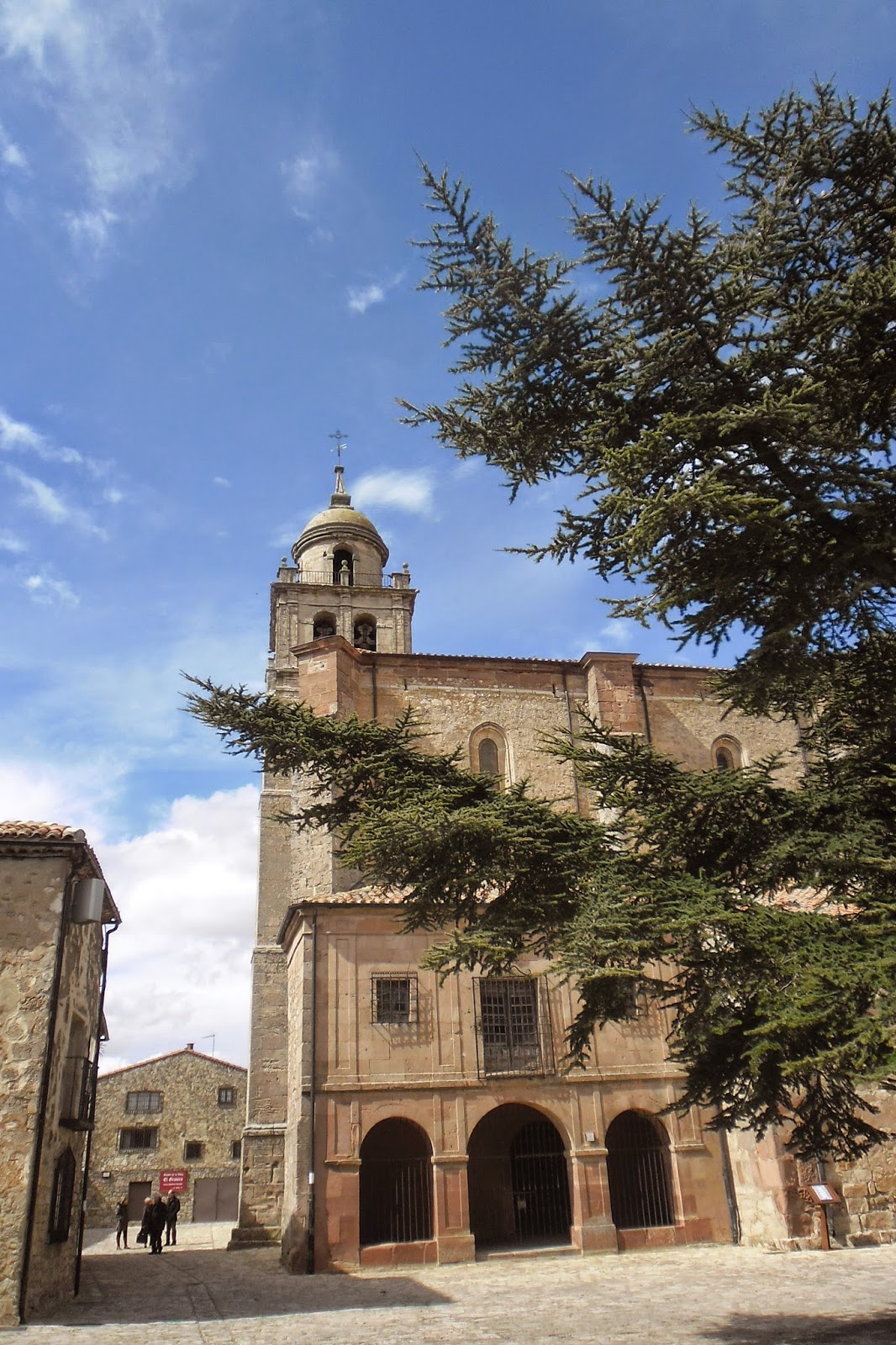 "The most beautiful square was chosen in that town high up in the heights (‘Medina’ means ‘city’ in Arabic; ‘celi’ means ‘sky’), and there, below an aged tree, the stone was embedded. It would also be a fountain, for water would run over its creased and cracked surface. That stone is like Pound’s face during his final years. The 15 May 1973—St Isidor’s day and the date of the town’s annual festival—was chosen for the monument’s inauguration. I took it upon myself to ensure that Olga Rudge, Ezra Pound’s companion, would be able to attend. Olga was seventy-eight and never went anywhere. But she went to Medinaceli." 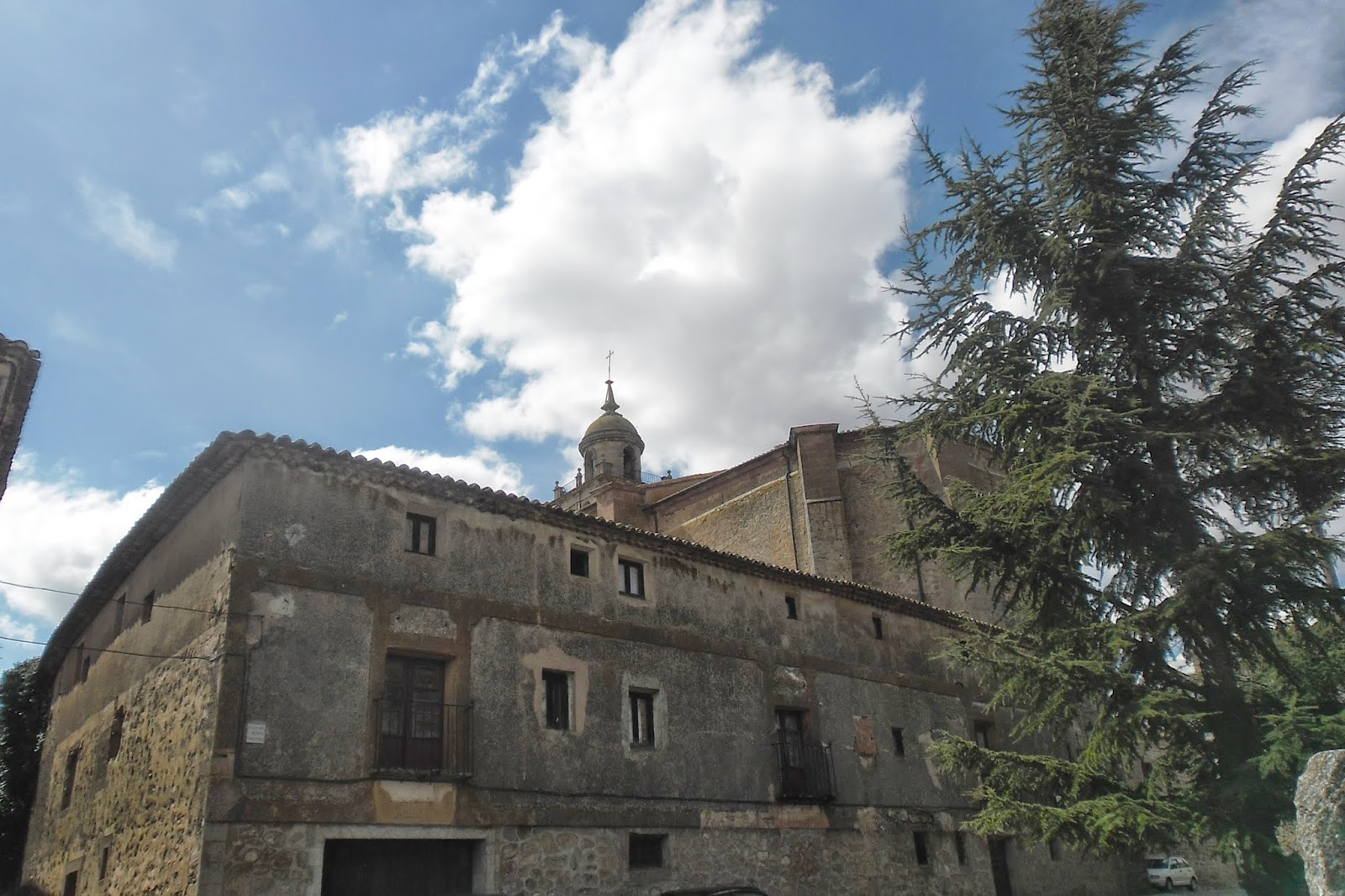 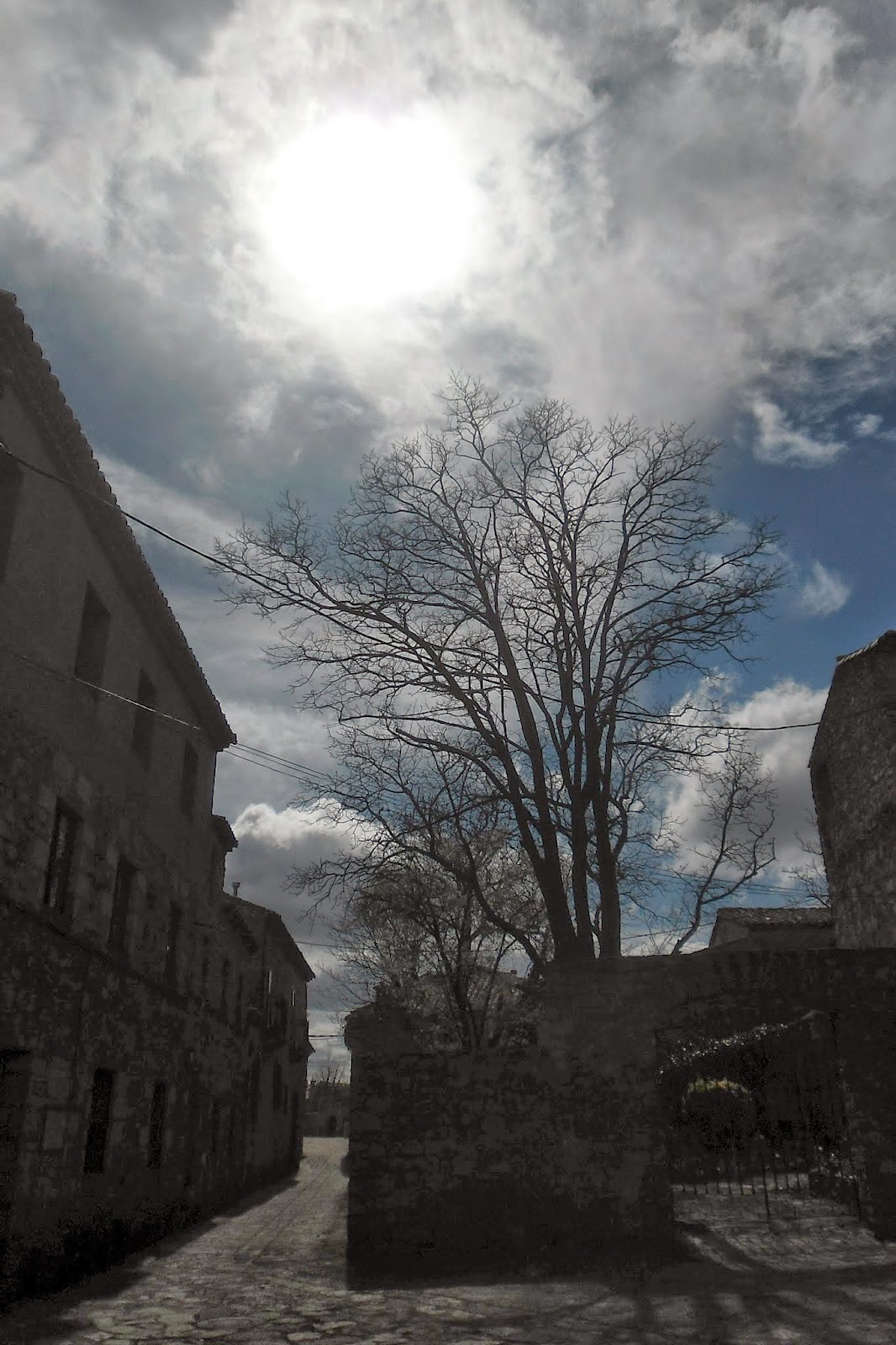 "Also present in Medinaceli were a few American painters who lived there. And also all the townsfolk in their Sunday best, with their well-cared suits; their berets; their shepherd’s crooks; their staffs of pilgrims of the heights; their noble aspects, made out of Castilian rock; their sons; their grandsons, already departing for the cities on the plains, cities without poetry. They were all there to pay homage to that poet from another land, from another world, which they never knew, which they never read—because many cannot read—, but which they know from within, with their rock souls, which resemble the face of the dead poet, of the ecumenical poet. Also there were the dogs and mules that accompanied and brought the stone; also there was the smith, the town’s priest, the Civil Guard, and the wine and the water and the bread, the grass and the birds of Medinaceli, of Old Castile. Also there were the roosters of Pound and of the Cid. Of those vanished warriors."

"On the afternoon of the homage ceremony, before the entire town, as I have said, and also before Pound’s heroic companion, was lifted the Spanish flag that draped the monument, the ‘face’, the ‘stone under elm’. And then, up on the elm, sung a blackbird. And the town commented on this event and will continue to comment on it for a long time, because the dwellers of those ancient ruined cities, of the towns of yesteryear, are like the Greeks of legend, like the Celts, and the Druids; and discover in a birdsong, on a day of auspices, an event worthy of interpretation, which in this manner fills their lives until their deaths

A blackbird still sings in Medinaceli. And it sings for Ezra Pound." 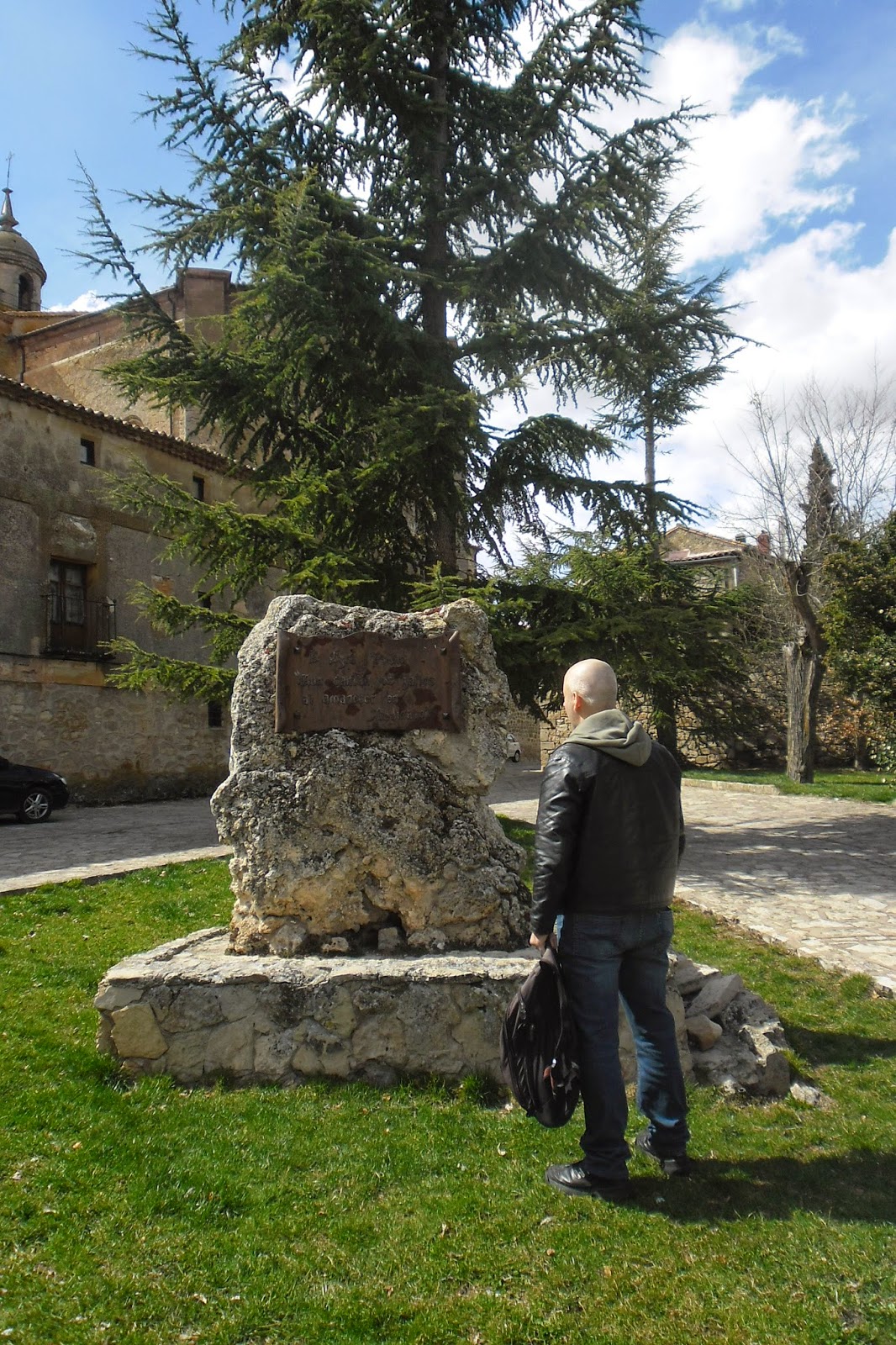