The Fall of Constantinople

29th of May 1453. The fall of Byzantine empire. Black day Hellas and the rest of Europe. The asiatic hordes after many centuries set foot on European soil. Several artists commemorated that day in their art. 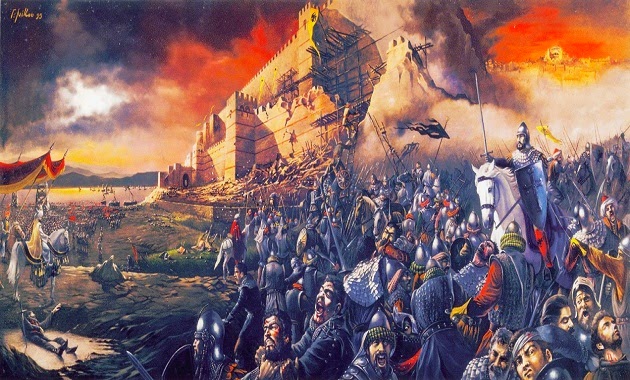 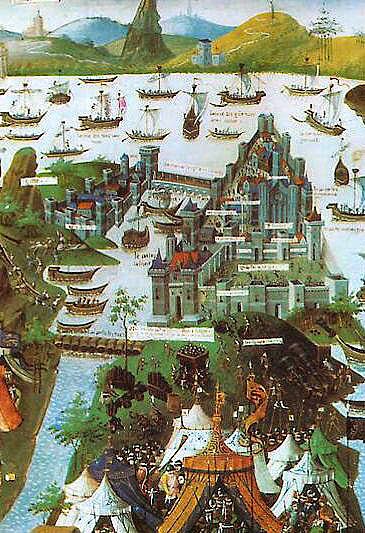 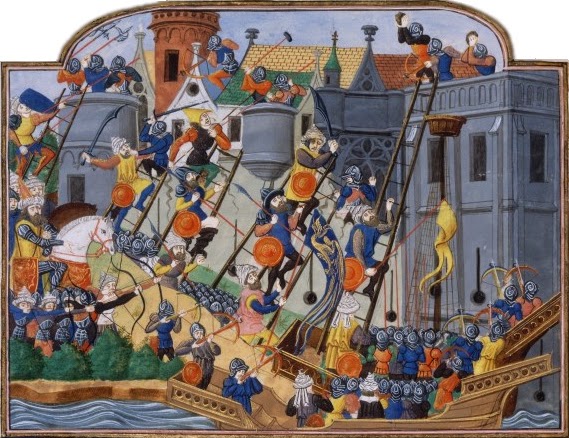 Previously Related Posts
Golden Dawn`s Memorial for The Last Defenders of Byzantium
Choose Your Side: With The Cosmopolians or with the Ethno-folkish Forces?

The Castle and the Hill Fort as Spiritual Metaphor

By Craig Fraser of the SIGURD

With the perpetual state of birth, life, death and rebirth which the hero goes through, so also does his outer shell go through a perpetual dying and renewing of his archetype. As Gandalf descended to face the Balrog, his literal nemesis he “died” and was reborn. Part of Sigurd’s eventual plan in the huge process of rebirthing a heroic tradition for the Indo-European man is to explore and expose the permanent state of initiation the hero is under. Aragorn goes from Strider to the contender to the throne of Gondor and through a ritual death and rebirth inside the mountain of the dead he faces his demons (by facing those of his people) and then undergoes a transformation which sees him able to ride onto the field of Pellennor as a victorious and conquering king, not merely a man. 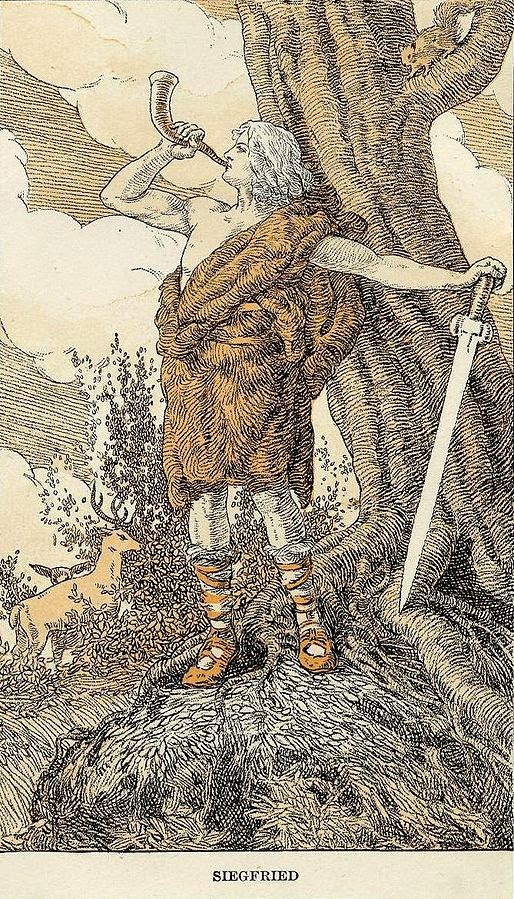 Sigurd goes through this process; the literal manifestation of the process you read in the “Book of the Heroic Outlaw” and the mythical hero as well. The “soul” of the Volsungs could be said to pass through several stages of initiation, death and rebirth with each of the incarnations of the scion of the bloodline. Volsung himself, Sigmund especially (experiencing the dark night of the hero in the cavern) and then Sigurd returning to reclaim what is his and eventually experiencing a downfall and death himself but arriving to the state of permanent preparation which is the lot of the Einherjar in Valhalla.

We all go through this process, sheathing off of the doom of the old self and a rebirthing, renewing and recasting of the new creature in new skin which is yet the same skin. We are the Ouroboros, devouring our own tail, eating our old flesh and constantly being reborn. It is especially important for the hero as he immerses himself in the savagery of the battlefield (ancient, medieval or modern being each in their own way as harrowing as each other) and being required to return to a state of normalcy when the deeds of war are done. It is a process the Samurai perfected in their idea of going from the brutality of mounted and close range warfare to drinking a cup of tea perfectly, brewed, poured and drunk by their Zen master who guided them in the strictures of self-control and permanent rebirth. 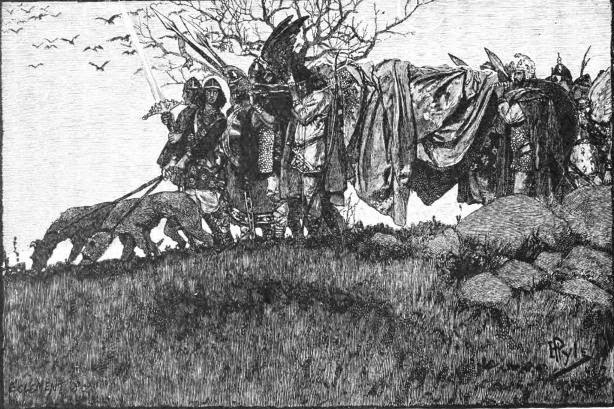 Sigurd will always die and be reborn; it is a part of this heroic archetype which we are unashamed of expressing. To cast off the unworthy, throw down the ballast and allow the favourable winds to carry us forwards whilst they will.

Spirituality: a strange concept, the idea that a man has something extra to himself which he governs and controls in the hope that it will benefit him or sculpt him toward a better end. A religion? Nay, something more than that. A faith? No, that too is not huge enough. A soul which guides him, yet also is him. Again, the ogre and the god are expressed, two warring parts of the self which conflict and confide in one another to better navigate the stormy seas of our lives. A better metaphor I am beginning to find is that of the castle. 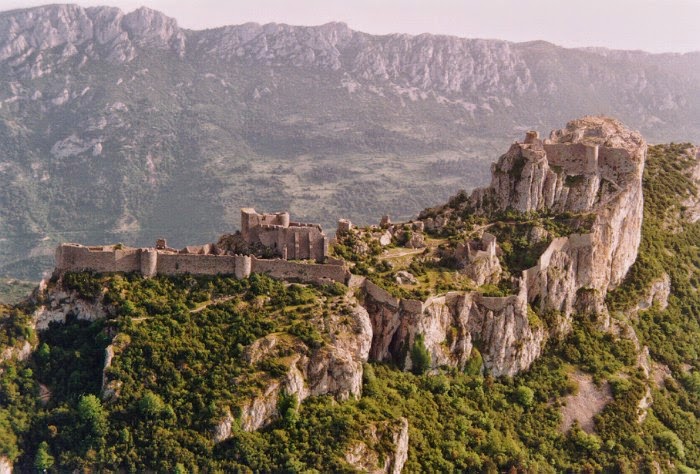 A castle, I believe, and the hill fort before it, are metaphors, physical depictions of the heavens on earth. On the outermost rim of the castle is a wall, beyond this wall is outside, everything outside is enemy to what is within, until it proves itself somehow to be not hostile by handing over weapons or making oaths of fealty that which is outside must not be let inside. Behind the wall is a moat, a barrier of water, the nemesis of the mounted and armoured knight, a certain death should he fall in with 30lbs of steel and mail attached to his body. This barrier is the metaphor of death itself, only passable by the drawbridge, much as Asgard could only be accessed by the Bifrost and was guarded by Heimdall, father of men. The historical drawbridge would have also been guarded by a Heimdall in the physical realm, a body of knights or warriors ready to protect the bridge and the gates to the castle with their lives. Next is the island or raised embankment which supports the castle itself, a large imposing building, a fortress, built for war and the defending of what is inside. There would be rooms and halls within the castle, rooms for specific tasks and jobs, divided according to class and nobility of rank, the servants and such living in the lower quarters and rising in higher and higher levels until the halls of the King or Earl are reached. 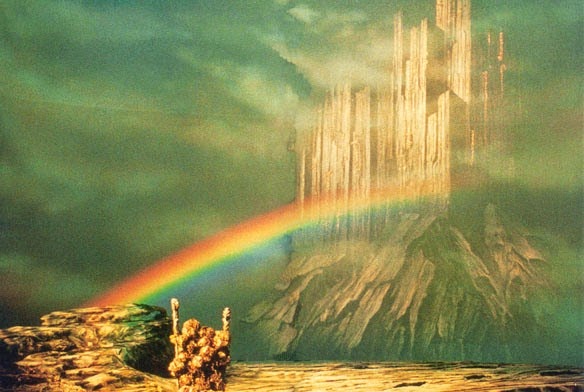 In military terms, the servants and the lower rungs of the castle are expendable, but at the core of the fortress is a leader who is protected by every fighting man within the walls. Yet this man is the King, he is also the man who is most willing among their number to die nobly and fight to the last breath, he is the KING after all and it is his place to defend, to be at the front. As Tacitus says in Germania –

“When they go into battle, it is a disgrace for the chief to be surpassed in valour, a disgrace for his followers not to equal the valour of the chief. And it is an infamy and a reproach for life to have survived the chief, and returned from the field. To defend, to protect him, to ascribe one's own brave deeds to his renown, is the height of loyalty. The chief fights for victory; his vassals fight for their chief.”

The same is true of the halls of the gods once again. The realm of Asgard is said to be divided up into halls of the various gods, with Odin’s halls and Valhalla obviously being central around his abode of Valaskjalf with the throne of Hlidskjalf at its summit where he can observe all of the realms. It is obvious that the Indo-European kings and jarls modelled themselves, their dwellings and their hierarchy on the gods themselves. It makes sense therefore to take the metaphor to its fullest conclusion and view the self in the same way. 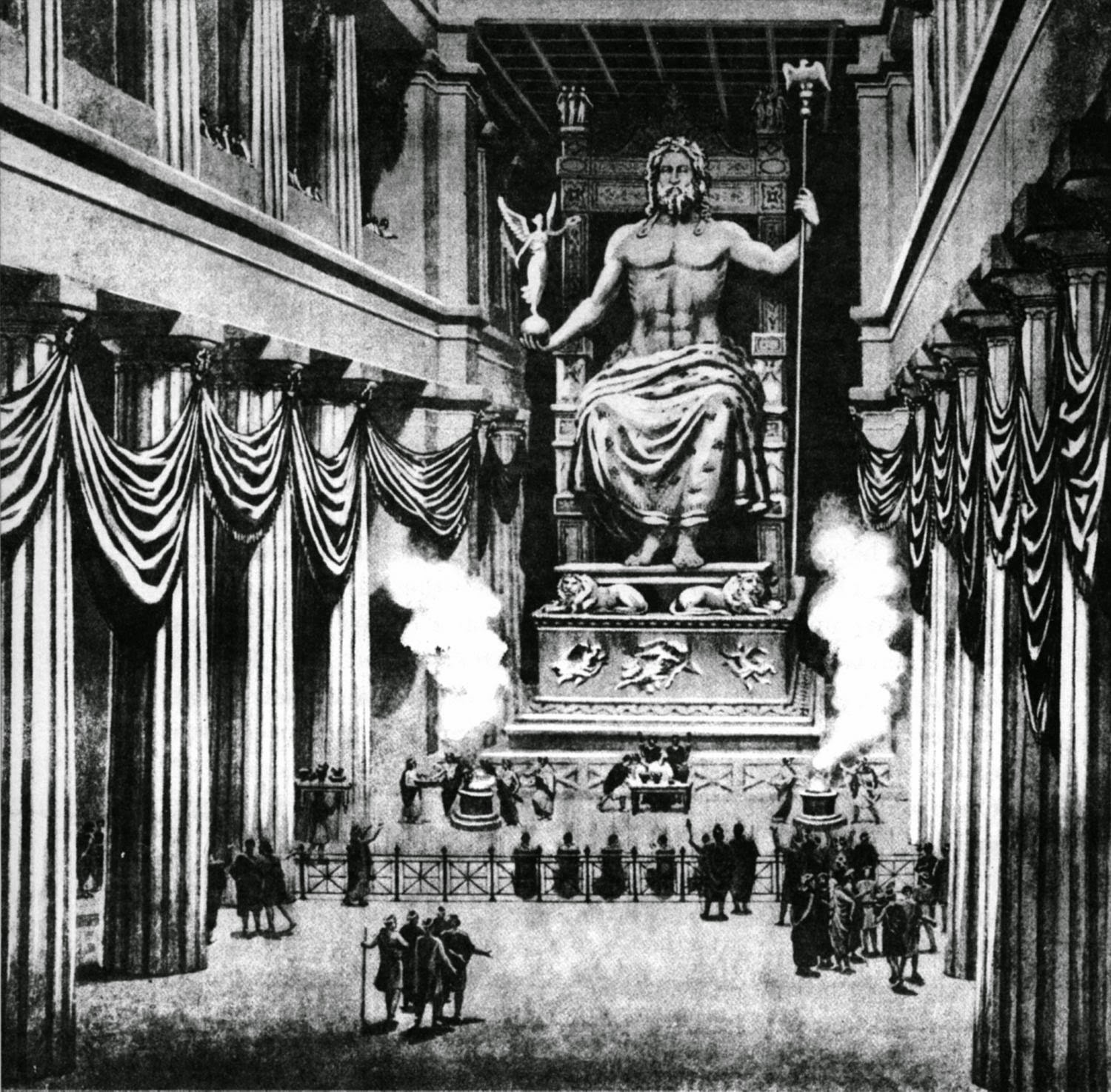 Externally you are the castle, the limbs, sensory organs, productive organs and the lower force centres or chakras are your servants, they all answer to and respond to the calls and commands of the brain, the ruling elite of the fortress, a miniature kingdom of itself with a million different personalities warring all at once for control. At the very core of your being is the soul, an inanimate and unknowable source which is permanently unified with the unknowable divine of Odin/Siva/Perun. This is the King at the source of your being, the hidden heart, the black sun, the chakra residing just above the rest, hovering above you, the only you that is truly you.

The castle is defended in the same way. The limbs and the organs work together to serve the brain and the soul, they move about, fight, flee, find food, feed the organs so they can produce fuel and stimulants that the brain can live off. But it is a symbiotic relationship, the brain simultaneously controlling the body yet relying on it to survive. There is a set time period of birth, life, death and rebirth which the body, mind and soul experience, each one being reborn at different times, physically, mentally and spiritually. 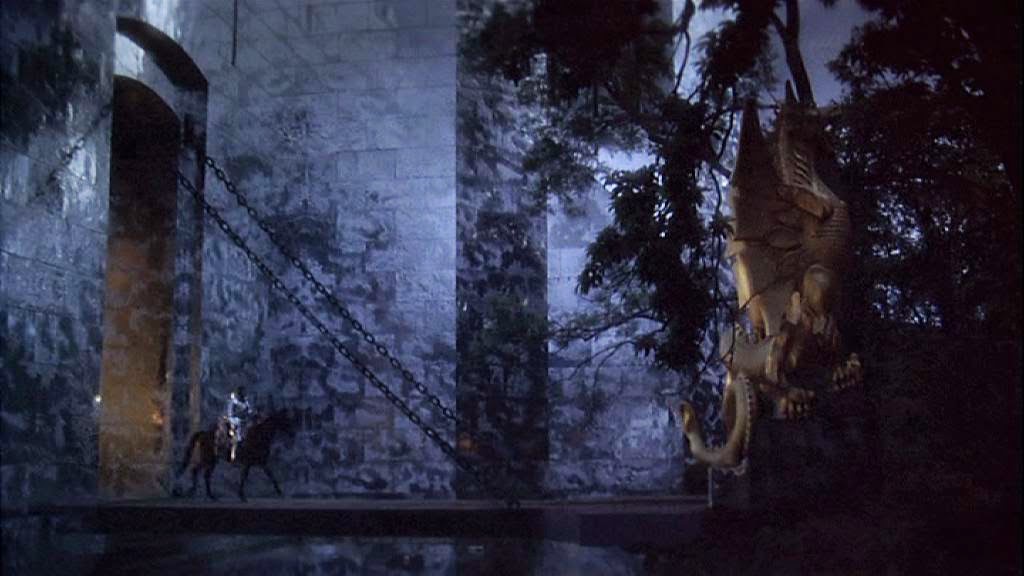 The castle, the hill fort, the kingdom, the tribe, all experience these births, lives, deaths and rebirths as well. And so the cycle continues. Experiencing the castle as a visual and physical metaphor for the body and soul of the people is an enormously liberating experience, one can look at the examples of Camelot, Minas Tirith, Helms Deep, Edoras, the Wewelsburg, Malbork castle and so on as physical embodiments of the culture they represent. As the folk slumbers and recedes so do the castles that were the physical embodiment of their Asgard or Valhalla.

In that sense then, when we visit a castle, a ruin, a skeleton of what was once a glittering fortress to the conquering peoples, we are now wandering about in the ruins of ourselves. Castles then are graveyards and we are the dead, waiting to be reborn as the barbarians of tomorrow. 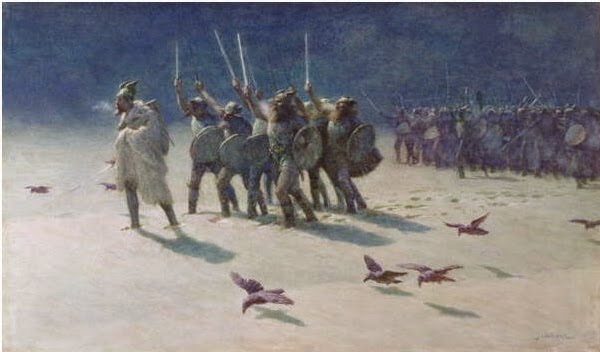 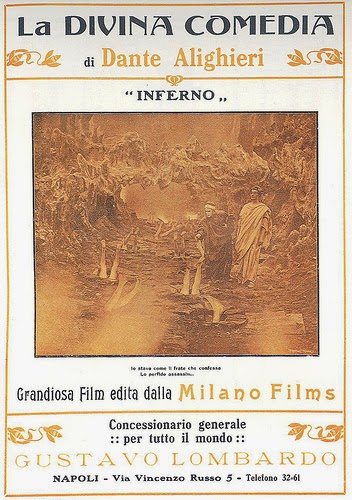 L`Inferno is one of the oldest films that exists. Despite the fact thats its more than a century old i doubt that there will be any other version with such magic and atmosphere.
There is already upload in Youtube in one part , but i choose to put this one that consists of many parts because it includes the music that composed in 2004 especially for this film by the legendary electronic group TANGERINE DREAM. If you want to see it without this soundtrack , you can easily find online the other versions too. 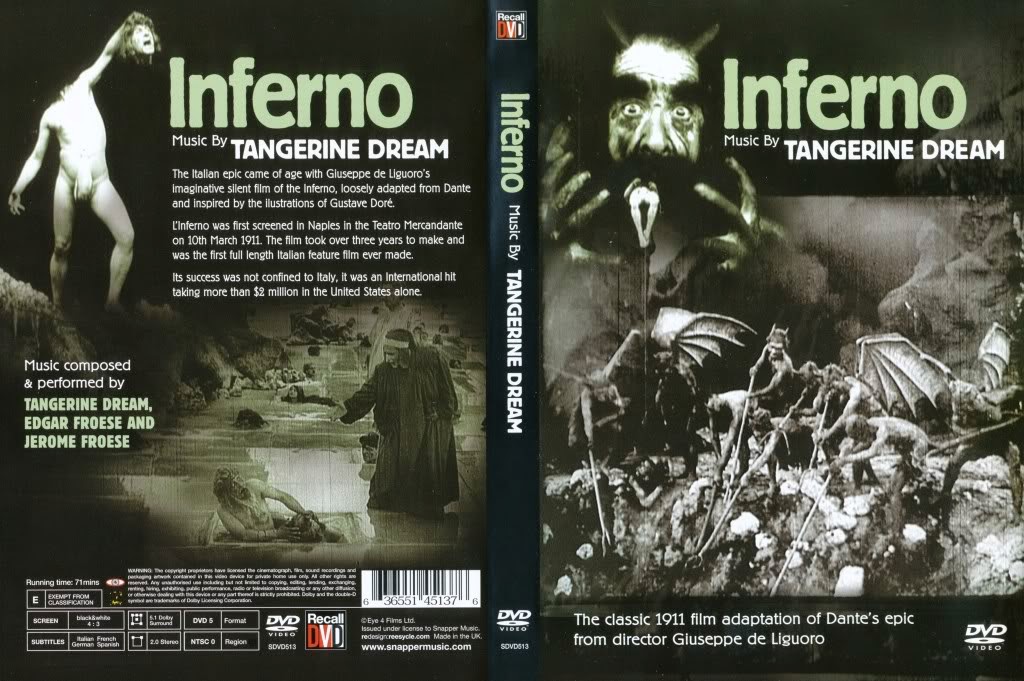 Here is the film in six parts: 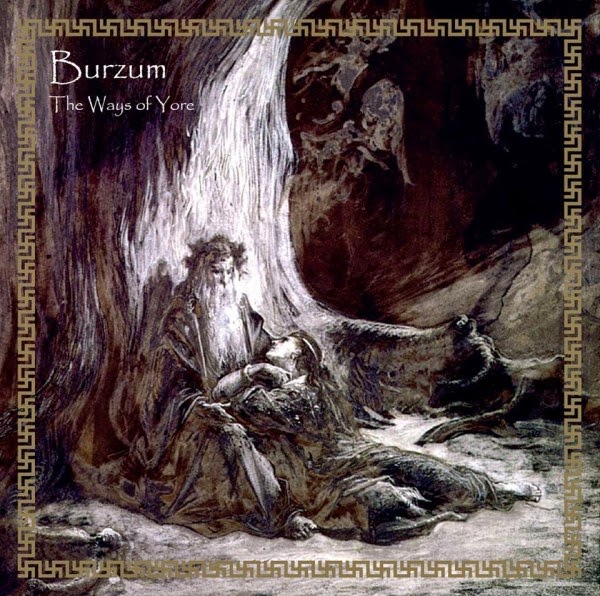 Tracklist:
God from the Machine
The Portal
Heill Odinn
Lady in the Lake
The Coming of Ettins
The Reckoning of Man
Heil Freyja
The Ways of Yore
Ek Fellr (I am falling)
Hall of the Fallen
Autumn Leaves
Emptiness
To Hel and Back again

Burzum says of the new album: "The Ways of Yore" is my first step towards something new, which at the same time is as old as the roots of Europe. With "The Ways of Yore" I try to transport the listener to the days of yore, to make them feel the past, that is still alive in their own blood.