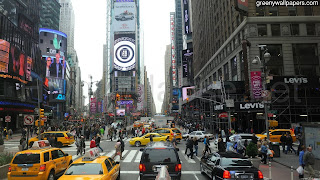 Its an undeniable fact that European civilization passes through a phase of stagnation, decay and ultimate corruption. Same and even worse goes also for its biological offpsrings.

Long long before the followers of nazarene and other similar jewish heretics (marxists, liberals etc) tried to impose their linear view of history and worldview, great thinkers, philosophers, poets from the Europeal racial culture and heritage viewed the course of the world and its cosmic manifestations as cyclical.
One of the first is Hesiod`s epic Works and Days. In Latin world, by great poet Ovid in the first book of his Metamorphoses
In Nordic heritage, this worldview reflected clearly in Völuspa.
There lies the origins of European past, present and future, and not to modern theories created by an alien folk and its followers.

Thomas Cole, is a Romantic landscape painter captured the phases that an empire (the embodiment and bearer of civilization - For more check Julius Evola & Oswald Spengler) has to go through.
His painting series (done between 1833 to 1836) titled THE COURSE OF EMPIRE and its in five parts. And here I put them:
(Pictures and accompanied texts taken from Wikipedia)
P.S. Its doesn`t take too much thought to realize that today we are somewhere between the third and fourth part, rapidly heading to the fifth. 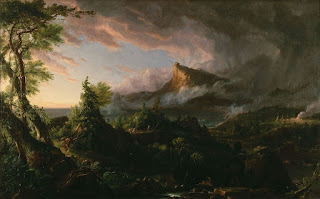 THE SAVAGE STATE
"The first painting, The Savage State, shows the valley from the shore opposite the crag, in the dim light of a dawning stormy day. A hunter clad in skins hastens through the wilderness, pursuing a deer; canoes paddle up the river; on the far shore can be seen a clearing with a cluster of tipis around a fire, the nucleus of the city that is to be. The visual references are those of Native American life. This painting symbolizes the ideal state of the natural world. It is a healthy world, unchanged by mankind." 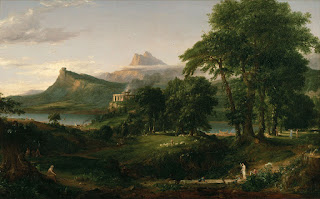 THE ARCADIAN or PASTORAL STATE
"In the second painting, The Arcadian or Pastoral State, the sky has cleared and we are in the fresh morning of a day in spring or summer. The viewpoint has shifted further down the river, as the crag with the boulder is now on the left-hand side of the painting; a forked peak can be seen in the distance beyond it. Much of the wilderness has given way to settled lands, with plowed fields and lawns visible. Various activities go on in the background: plowing, boat-building, herding sheep, dancing; in the foreground, an old man sketches what may be a geometrical problem with a stick. On a bluff on the near side of the river, a megalithic temple has been built, and smoke (presumably from sacrifices) arises from it. The images reflect an idealized, pre-urban ancient Greece. This work shows mankind at peace with nature. It symbolizes that the environment has been altered, but not so much so that it or its inhabitants are in danger." 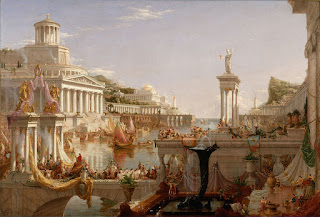 THE CONSUMMATION OF THE EMPIRE
"The third painting, The Consummation of Empire, shifts the viewpoint to the opposite shore, approximately the site of the clearing in the first painting. It is noontide of a glorious summer day. Both sides of the river valley are now covered in colonnaded marble structures, whose steps run down into the water. The megalithic temple seems to have been transformed into a huge domed structure dominating the river-bank. The mouth of the river is guarded by two pharoses, and ships with lateen sails go out to the sea beyond. A joyous crowd throngs the balconies and terraces as a scarlet-robed king or victorious general crosses a bridge connecting the two sides of the river in a triumphal procession. In the foreground an elaborate fountain gushes. The overall look suggests the height of ancient Rome. The decadence seen in every detail of this cityscape foreshadows the inevitable fall of this mighty civilization." 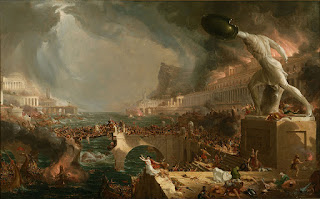 DESTRUCTION
"The fourth painting, Destruction, has almost the same perspective as the third, though the artist has stepped back a bit to allow a wider scene of the action, and moved almost to the center of the river. The action is the sack and destruction of the city, in the course of a tempest seen in the distance. It seems that a fleet of enemy warriors has overthrown the city's defenses, sailed up the river, and is busily firing the city and killing and raping its inhabitants. The bridge across which the triumphal procession had crossed is broken; a makeshift crossing strains under the weight of soldiers and refugees. Columns are broken, fire breaks from the upper floors of a palace on the river bank. In the foreground a statue of some venerable hero (posed like the Borghese Warrior) stands headless, still striding forward into the uncertain future.[a] In the waning light of late afternoon, the dead lie where they fell, in fountains and atop the monuments built to celebrate the affluence of the now fallen civilization. The scene is perhaps suggested by the Vandal sack of Rome in 455. On the other hand, a detail in the lower right of "The Consummation of Empire" shows two children fighting, one clad in red and the other in green—the colors of banners of the two contending forces in "Destruction," which thus might depict a foreshadowed civil war." 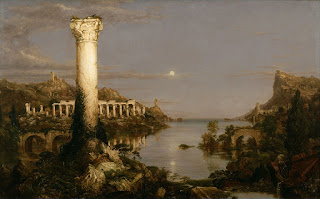 DESOLATION
"The fifth painting, Desolation, shows the results, years later. We view the remains of the city in the livid light of a dying day. The landscape has begun to return to wilderness, and no human beings are to be seen; but the remnants of their architecture emerge from beneath a mantle of trees, ivy, and other overgrowth. The broken stumps of the pharoses loom in the background. The arches of the shattered bridge, and the columns of the temple are still visible; a single column looms in the foreground, now a nesting place for birds. The sunrise of the first painting is mirrored here by a moonrise, a pale light reflecting in the ruin-choked river while the standing pillar reflects the last rays of sunset. This gloomy picture symbolizes what all empires could be after their fall. It is a harsh possible future in which humanity has been destroyed by its own hands." 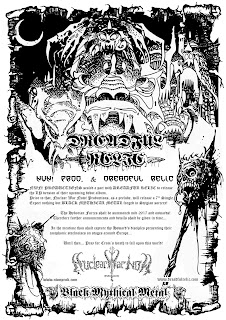 Ancient Monuments After The Touch of Ariadne 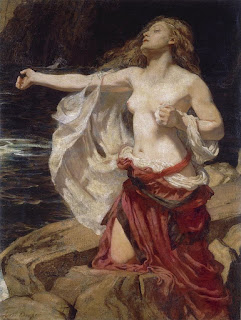 Ariadne was the code name given to the Siberian cold that last week descented into Central and South Europe. In Hellas, usually there is snow and minus zero temperatures in the northen parts of the land, but its very rare to snow in the whole of country at the same time. Even inside Athens and in the Aegean islands.

During the passage of Ariadne the ancient monuments and temples looked exceptionally great! Because its something that its very rare to see.
Here is some photos of some of this sites covered in snow. Captured by local photographers. 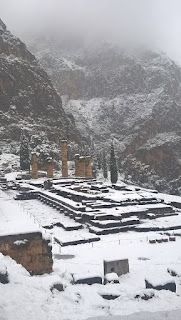 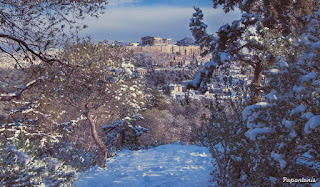 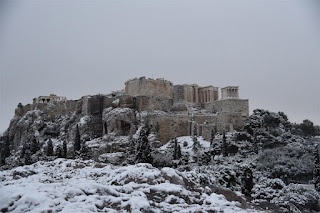 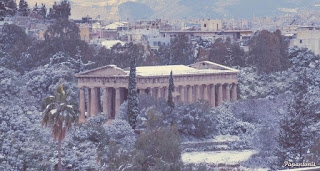 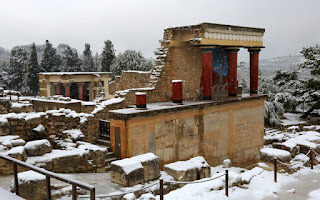 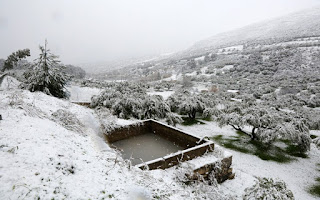 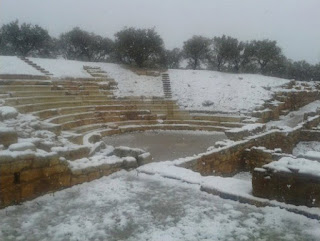 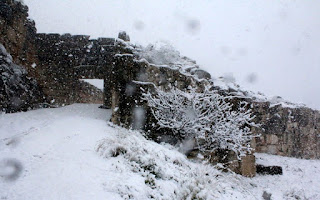 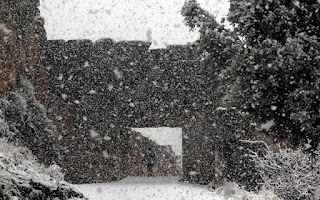 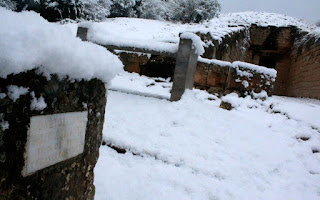 The Birthday of TinTin and The Dangers of Communism 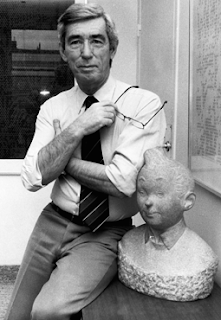 10th of January is the official birthday of the famous TinTin. From whom his creator Herge inspired to do this classic comic hero is already mentioned before in this blog (for those who missed this post, check the link after this article).  Also it is quite known  that the first two volumes are quite forbidden today in Europe. In some places openly and in some other secretly (by simply not re-print it anymore or just "vanished" it from the shelves of the second hand stores). 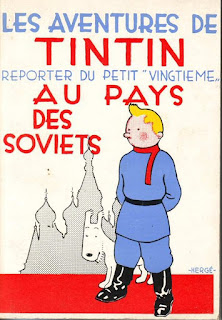 For reasons that are still uknown to me, recently in Hellas a big comic publishing house re-printed in its original form the debut adventure of TinTin which is TinTin in the Land of the Soviets. Taking into consideration the current political state of affairs, thats a bold movement for sure.
However, by doing the basic search, easily someone can discover that its just a simple story in a foreign country, but the testimony of an eye-witness transfered into comic. 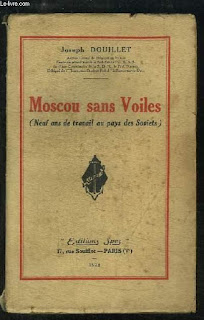 Herge himself admitted that his inspiration for the story was the book of Joseph Douillet Moscow Unmasked: A Record of Nine Years Work in Soviet Russia For more info see HERE


Now what we have to do is to find a proper English version of this book.

PS. There is a similar book also in Hellas. Aristeides Andronikos, the Greek embassador in St.Petersburg during the bolshevik revolution era, wrote also a book that published during the 1920's titled "What is Bolshevism?" which served as a warning about the communist atrocities and the plans for an upcoming jewish domination in whole of Europe.

Latest News From The Underground Front 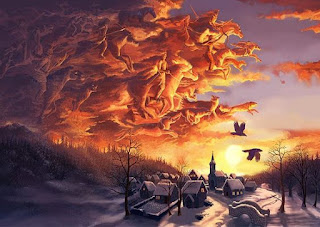 Here are some of the latest news from Racially motivated underground bands that deserve your support. Omaimon Paradosis Blog fully recommends these releases! 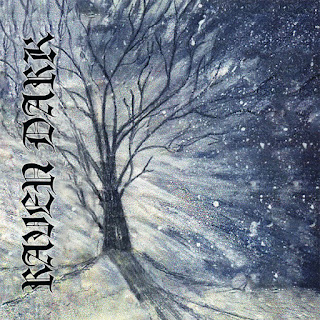 
COPIES FROM THESE RELEASES WILL BE ALSO AVAILABLE FROM:
www.frost-and-fire.com