A view in The Life of The Monarch of Bayreuth

To continue my previous post, here is something that i wanted to write for many months now but all the time postoponed it.
We all know the works of the biggest (I`ll dare to say) composer this world ever known, Richard Wagner. Most people that i have spoke on the matter, never bother to search further on the everyday life of the composer and the background of the music they hear.
I already had several cds with Wagner`s music and also his book "Judaism in Art" , but things were not so simple in his life. Richard Wagner was an artist-fighter. A true revolutionary who left a peaceful life full of wealth in King's court, and hunted, boycotted, back stabbed and spend most of his life as a fugitive because of his ideas and actions.

Two years ago i came in touch with the Wagner series. This turned out to very imformative and a perfectly maded Epic! A real suprize for me. "Wagner" is a huge nine-hour biographical panorama of his life. So far i had watched it 3 times and i can assure you all that this one of the best series ever. Richard Burton as Richard Wagner did a really impressive performance. Other known actors on this Vanessa Redgrave, Ralph Richardson, Lawrence Olivier and more. The whole filming took over seven months in locations like Switzerland, Bavaria, Venice, Sienna and Hungary.
In the series you`ll be able to see many details of the everyday life of Wagner, the way he wrote and composed the operas, his action during the Dresden Revolution, his life in various coutries, the boycotting of the jews and the jewish composer Giacomo Mayerber. A big "plus" in the series is the great landscapes, the narrator, and ofcourse the soundtrack of the film which is Wagner`s music blended perfectly with the whole atmosphere.
Unfortunately, there is not many places that you can find this Epic available. But Amazon have it for sale:
http://www.amazon.com/Wagner-Complete-Epic-Richard-Burton/dp/B0007TFHJS/ref=pd_bbs_sr_9/002-4101324-7868045?ie=UTF8&s=dvd&qid=1191082024&sr=8-9

Further, if anyone wants to get more details about Richard Wagner and his life, can read his autobiography titled "My life"
Vol.1 : http://www.gutenberg.org/etext/5197
Vol.2 : http://www.gutenberg.org/etext/5144
"I was, moreover, much impressed by a biography of Mozart which was read aloud; and the newspaper accounts and monthly reports of the events of the Greek War of Independence stirred my imagination deeply. My love for Greece, which afterwards made me turn with enthusiasm to the mythology and history of ancient Hellas, was thus the natural outcome of the intense and painful interest I took in the events of this period. In after years the story of the struggle of the Greeks against the Persians always revived my impressions of this modern revolt of Greece against the Turks."
Richard Wagner "My Life"

Richard Wagner died in Venice in 1883, as long as he lived his dream for a united Germany, reborn from its Mythic/Heroic Past doesn`t became true. Few years later, a man borned in Austria, took the torch and carried Wagner's vision, restored his legacy with the honour and respect that the name truly deserved!
Posted by T.K. at 19:38 No comments: 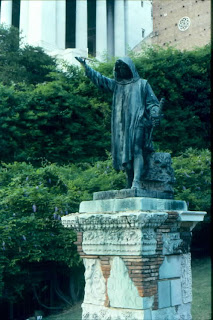 Several weeks ago and while listening some parts of Wagner`s "Rienzi" i was wondering, ok we all know more or less the concept behind most of Wagner`s works. But i never checked whats really is "Rienzi", suddenly it came to my mind the words of August Kubitzek about Rienzi and Hitler`s comments about it:

"Rienzi had a great impact upon Hitler. According to August Kubitzek’s own words, Hitler was overtaken by a mystical obssession the very day they watched together for the first time Wagner’s opera, "Rienzi": when they left the opera, Hitler was silent and grim. When they reached a hill, he grabbed Kubitzek’s hands and spoke in a deep, harsh voice, far different from his usual speeches, exclaiming that Providence would bestow upon him a great mission. He was speaking as if he was overtaken by a Force, a Force that was speaking through Hitler. From that evening on, Hitler was ensured for his Fate, waiting for Providence to bestow him his Mission. To put it in Hitler’s words: "…to understand National Socialism, one must first understand Wagner, particularlly Rienzi and Parzifal"."

Searching for the history of Rienzi i founded out an incredible story behind this person. You can read more info about him and his life in wikipedia:


Further, a comrade found out and sent me the link of a book about Rienzi writen by Sir Edward Bulwer Lytton in 1835:

Rienzi - The Last of the Roman Tribunes
http://digital.library.upenn.edu/webbin/gutbook/lookup?num=1396


I myself, had not the time yet to check yet deeply this book but from the very few that i read here and there it looks very intresting and informative.Besides, the name of Sir Lytonn alone guarantee this i think.
And while the readers of this blog read this post and probably checking the above mentioned links, you can use as background a 13 min track(Live version) that i uploaded and taken from Wagner`s "Rienzi" and titled "Die Algunder"


P.S.1 The photo i post here is from a statue of Rienzi in Rome. The reason that i especially mentioned it here is this:

"The base for the statue is composed of bricks and other fragments from ancient Roman ruins, symbolizing the idea that Rienzo's period of rulership was based on the ideals of the ancient Roman Republic."

P.S.2 Speaking about Richard Wagner, we have not finished yet. In my next post to this blog, i have to show you something related to him that will help anyone who intrested to understand better and deeper the importance of his life and the meaning of his works.
Posted by T.K. at 21:04 No comments: