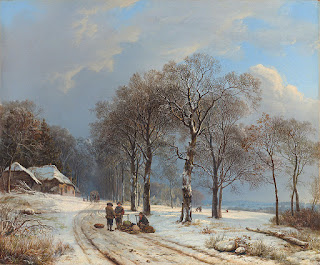 To tremble from cold in the icy snow,
In the harsh breath of a horrid wind;
To run, stamping one's feet every moment,
Our teeth chattering in the extreme cold

Before the fire to pass peaceful,
Contented days while the rain outside pours down.

We tread the icy path slowly and cautiously,
for fear of tripping and falling.
Then turn abruptly, slip, crash on the ground and,
rising, hasten on across the ice lest it cracks up.
We feel the chill north winds course through the home
despite the locked and bolted doors...
this is winter, which nonetheless
brings its own delights.

Et in Arcadia Ego part I - The Arcadian Shepherds

Arcadia is place located in the south Hellas. Its mountains and rivers, the forest and wilderness that God Pan roams make it so unique that since the antiquity has been the inspiration of poets, artists, wanderers, painters and heroes.

"Et in Arcadia Ego" means in latin something like "I`m also in Arcadia" and I choosed this as a title in a number of posts dedicated to this great mythical place.


Part I - The Arcadian Shepherds 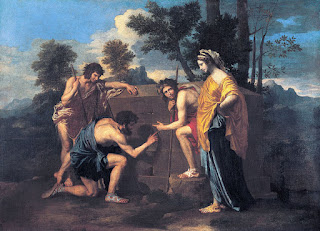 The Arcadian Shepherds (also known as Les bergers d'Arcadie or Et in Arcadia Ego) is without a doubt the most famous and most widely discussed of any of Poussin's paintings.

This image depicts three shepherds and a monumental, statue-like woman grouped around a large stone tomb. The idyllic natural setting, the antique robes and sandals of the figures, and, of course, the painting's title all situate this in the mythical realm of Arcadia.

Arcadia was a real region in Greece: isolated, surrounded by mountains, and sparsely populated by shepherds, already in antiquity the region was romanticized as a kind of terrestrial paradise, a place of unspoiled nature whose inhabitants still lived in the blissful harmony (and ignorance) of the Golden Age.

The myth of Arcadia has inspired poets and artists alike through the millennia, notably the Roman poet Virgil, whose Eclogues (a series of poems which take place in Arcadia) were one of the major inspirations for this painting.

In the midst of this paradise, however, these shepherds look somewhat concerned. What is it that they are examining with such perplexed intensity? A tomb, with the phrase Et in Arcadia Ego inscribed in the center. This Latin phrase roughly translates into English as "Even in Arcadia I exist," referring to the contents of the tomb: death. These shepherds are thus discovering their own mortality.

The woman:
The female figure has been transformed from a sexy, windblown nymph in the background of the painting to a fully-clothed, monumental, statue-like figure who almost dominates the composition. Her pale, grayish skin and sharp, heavily contoured profile reveal the classical inspiration for this personage.

The mysterious woman still provides a beautiful contrast to the discovery of death, but in this version of the painting she is also the only figure who fully understands the meaning of the tomb's inscription, thus investing her with a far higher purpose than in the earlier painting. Art historians have waged fierce battles as to how to interpret this figure: does she represent Reason? The goddess Athena? Or is this Death herself? 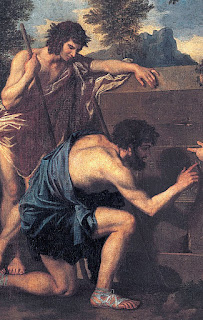 The shepherds:
This composition is far more classical, rational and carefully ordered than Poussin's earlier painting. Here, the shepherds are arranged around the tomb in a careful balance, each with a different posture and attitude. The kneeling shepherd in the center is still trying to make out the inscription on the tomb, while the shepherd to the right seems to have already understood and looks questioningly towards the woman to his right.

The landscape:
Like the landscapes that Poussin would be painting in the coming decade, this depiction of the countryside is idyllic and lovely, creating another contrast with the horror of the discovery of death. Along with Annibale Carracci and Claude Lorrain, Poussin was a pioneer in the development of landscape painting.

Et in Arcadia Ego:
Poussin places the all-important inscription in the very center of the painting and the correct interpretation of this inscription is a matter of great debate in the world of art history. 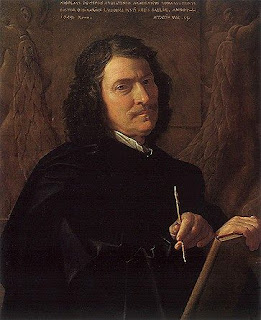 The tone:
Poussin himself seems to have been a firm believer in the ancient Stoic philosophy, which was quite popular amongst the Roman intelligentsia in the 17th century. The philosophy holds that material possessions are essentially valueless, and that man must learn to tame his animal emotions and face his mortality with quiet resignation. Art historians believe that this philosophy was a fundamental inspiration for many of Poussin's paintings.

The Samurai of The Skies 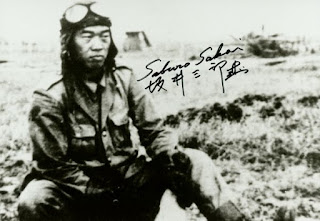 Saburo Sakai was a legendary flying pilot (of Samurai ancestry) of the Japanese Imperial Navy during WWII. His full biography HERE

Below are two videos describing in full details two of his many air battles. Both taken from his classic autobiography SAMURAI! 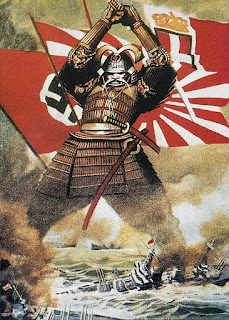