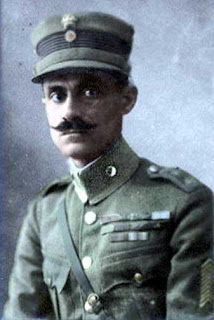 He who loves his country, should also wish
to understand it
He who wishes to understand it, should try
at every turn to penetrate its History.
Jakob Grimm

General, War Hero and Defender of the sacred Land of Ionia. His name became a synonym of fear for turks and a legend in Hellas.
Below is a video clip and music created by the Greek composer Stamatis Spanoudakis. Its title is "The Black Horseman", which was the main nickname of Nikolaos Plastiras.
There you`ll see plenty of pics from the march of the Hellenic army in Minor Asia. Amongst them, "The Black Horseman of Satan`s Army".
Nikolaos Plastiras wrote his name with golden letters in the long military tradition of Hellas.


"After finishing school in Karditsa, he joined the 5th Infantry Regiment as a volunteer in 1904. He fought in the Macedonian Struggle, and participated in the military coup of 1909. He entered the NCO School in 1910 and, after being assigned to the rank 2nd Lieutenant in 1912, he fought with distinction in the Balkan Wars, where he earned his nickname "The Black Horseman". He first rose to wider prominence when, as a Major, he supported the Movement of National Defence of Eleftherios Venizelos during the First World War. He fought with distinction with the 5/42 Evzone Regiment at the battle of Skra-di-Legen and was promoted to Lieutenant Colonel. In 1919, Colonel Plastiras commanded the 5/42 Evzone Regiment in the Ukraine, as part of an Allied force aiding the White Army in their ultimately unsuccessful fight against the Red Army. His force was then transferred to Smyrna in Asia Minor via Romania.

During the botched war with Turkey from 1919–1922, the Turks called Plastiras Kara Biber ("The Black Pepper"), while the 5/42 Evzones became known as the Seytan Asker ("Satan's Army"). His advance was finally halted at Kale-Grotso, just across the Sakarya River. Soon after, at the battle of Sakarya, the Greeks were forced to begin their retreat. After the Turkish breakthrough in August 1922, Colonel Plastiras' unit was among the few retaining any coherence, withdrawing orderly to the coast, fighting off superior Turkish forces, rallying around him men from other units and saving several thousands of Anatolian Greeks along the way. For these feats he earned immense popularity, especially among the Ionian Greeks he helped save."