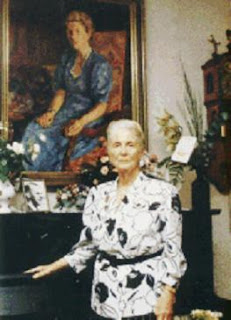 Before the Feast of Ostara, a great woman, friend and tireless comrade has departed from our midst. Mrs. Florentine Rost van Tonningen Heubel left us on the 24th of March at 00:00 pm on the age of 92. Florrie was the wife of a great man of the Dutch SS and a leading character of National Socialism, Meinoud Marinus Rost van Tonningen. She had the privilage to know in person many personalities of the SS during WWII and her marriage was conducted by Adolf Hitler himself. After the war she faced many persecutions but she remained unshaken and obstinate and she was definitely the person who carried the banner of NS in Holland during the difficult post-war years. Untill the final moments of her life she kept roaming Europe for the NS Ideals, writing books and organizing manifestations even in her house in secrecy and under the continuous hunt of the secret police. She visited Hellas in 1998 with the desire to meet and address the 5th Pan-european Congress of Nationalist Youth, even though she could barely stand with the help of her children. It was a great honour for all of us to meet her in person.
Even after her death the secret police of Holland asked not to be buried but to be cremated and scatter her ashes all over the country in order to prevent her grave becoming a revered monument for the European National Socialists... How great is their fear!...May her Memory be Eternal!