Another movie about Spartans?

Steven Pressfield is an American author who wrote several Historical novels about Ancient Hellas. His most known title is GATES OF FIRE 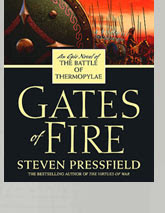 Since years now i have heard that there will be a movie based on Pressfield`s brilliant work. It seems thats its true!
Here is the answer taken from the "F.A.Q." section of his official website:

"Will there be a movie of Gates of Fire? This is the most frequently asked question we get on this site.
Steven Pressfield answers:
"Gates has been under option to Universal Studios since it was first published in 1998. The acquiring production company was George Clooney and Robert Lawrence's Maysville Pictures. A number of scripts and revisions have been written for them and Universal since then, all by the top-notch young writer David Self (Thirteen Days, Road to Perdition, the upcoming Submariner.) Michael Mann (Heat, Ali, Collateral) was the director attached, but two summers ago he and the studio parted company over--that fateful phrase--creative differences."

In the meantime, i reccomend to you all to check Pressfield`s amazing works about the world of Ancient Hellas.