The Rime of The Ancient Mariner

'Instead of the cross, the Albatross
About my neck was hung'
When an albatross leads a stricken ship out of treacherous ice, a hapless mariner shoots the bird, arousing the wrath of spirits who pursue the ship. Haunted by Death, the crew begin to perish one by one, until only the cursed mariner remains to confront his guilt. As penance for his actions he is condemned to wander the earth, telling his tale to those he meets as a warning.
The Rime of the Ancient Mariner is Samuel Taylor Coleridge's longest major poem and marks the beginning of the romantic movement in British literature.
(from the publisher) 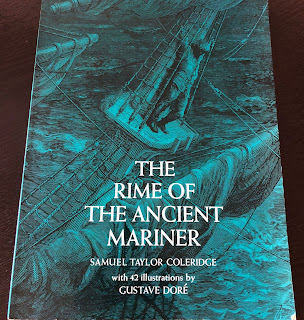 (From the publisher)
"Gustave Dore's magnificent engravings for The Rime of the Ancient Mariner are among the later works of the great French illustrator. The intensely evocative poem provided Doré with the long-awaited opportunity to convey limitless space on a gigantic scale, and he exploited the poem's fantastic range of atmosphere to the limits of its possibilities. The terrifying space of the open sea, the storms and whirlpools of an unknown ocean, the vast icy caverns of Antarctica, the hot equatorial sea swarming with monsters, all of the amazing visual elements that make Coleridge's masterpiece one of the most exciting and most memorable poems in the English language are unforgettably engraved in Doré's plates.
This edition reproduces all of the plates to perfection, in their original size. The illustrations and the text of the poem appear on facing pages, so that the imaginative kinship of Doré and Coleridge is delightfully evident on every page: the illustrations capture all the moods of the poem in their full intensity, bringing the images evoked by the words into clear visual focus."
To see Gustave Dore's engravinings click HERE 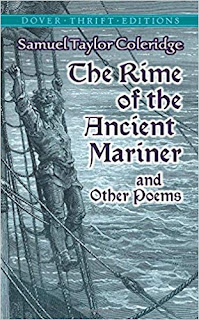 (From the back cover)
"One of the great narrative poems in English, "The Rime of the Ancient Mariner" is admired for its fluid meter and masterly structure, accurate observation of sensuous detail and mystic power. Coleridge asserted that his aim in writing the poem was to make the supernatural seem real."