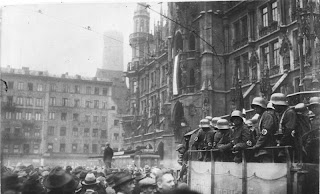 "Remembering November 9th.
16 fallen comrades were the first "blood martyrs" of the NSDAP and were remembered by Hitler in the foreword of Mein Kampf. The Nazi flag they carried, which in the course of events was stained with blood, came to be known as the Blutfahne (blood flag) and was brought out for the swearing in of new recruits in front of the Feldherrnhalle when Hitler was in power. Shortly after he came to power, a memorial was placed at the south side of the Feldherrnhalle crowned with a swastika. The back of the memorial read Und ihr habt doch gesiegt! (And you triumphed nevertheless!). Behind it flowers were laid, and either policemen or the SS stood guard in between a lower plaque. Passers-by were required to give the Hitler salute. The putsch was also commemorated on three sets of stamps. Mein Kampf was dedicated to the fallen and, in the book Ich Kämpfe (given to those joining the party circa 1943), they are listed first even though the book lists hundreds of other dead. The header text in the book read "Though they are dead for their acts they will live on forever." The army had a division named the Feldherrnhalle regiment, and there was also an SA Feldherrnhalle division. "Die Neunte Elfte" (the "Ninth of the Eleventh") became one of the most important dates on the Nazi calendar, especially following the seizure of power in 1933." 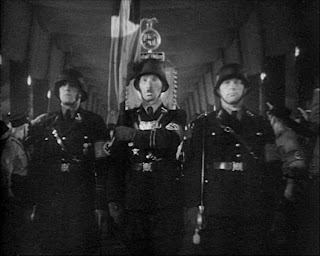