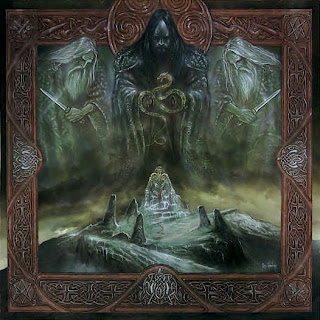 I`m sure that most of you are familiar with the latest album of ABSU named "Tara" and for sure you must know as well the famous artist KRIS VERWIMP. He is responsible for several covers in the Black Metal scene(Moonblood, Immortal, Marduk, Night Conquers Day e.t.c.). I always liked the art of this guy and i oftenly checking his website for the latest news, covers e.t.c. Today i noticed something which definately suprized me.

"I had already planned a trip to Ireland when I received a letter from Absu. Tara was one of the places I wanted to visit in Ireland, so when I read that Absu were doing a concept album about this place, I immediately got an idea. It's one of those strange coincidences that occur sometimes. When I was on the Hills of Tara, I collected some soil from the place where the high kings were seated. I also collected soil from the place where the Stone Of Destiny stands and from other parts of the site. Later, when I got back home, I mixed the soil with water and acrylics in order to be able to paint with it. So using that mixture, I painted all the borders and artworks for the Tara CD. So there's really a physical connection between the cover art and the actual Tara itself. I think there is no greater tribute."

With this, Kris Verwimp show that he is a devoted artist with true dedication & respect about his painting art.