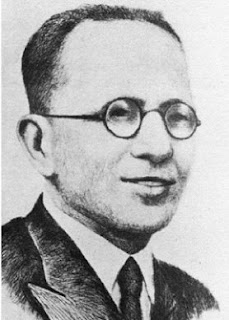 Ioannis Sikoutris(1901-1937) was a Hellenic scholar, borned in Smirni (Now under Turkish occupation since 1922) and in 1919 moved in Athens. He wrote several works about Ancient Hellas and the Immortal Hellenic Fighting Spirit. His best works titled "Platonic Evangelism" and "Heroic Way of Life". At 1937, Ioannis Sikoutris in a very young age commited suicide. As usual, almost none of his works are translated in English. Below are in English some parts from his work "The Philosophy of Life" (Which is a part from the "Heroic Way of Life").

THE HERO AND THE HEROIC WAY OF LIFE
" The heroic perception of life commences from the principle that Life is a never-ending struggle, an unceasing and interminable fight against nature, against people and against ourselves. Thus men from every generation constitute a continuous transition to something else, something superior. Not a different kind of organic being (like, for example, Nietzsche's superhuman) but a conveyor - a carrier- of an inferior, i.e. an intense, richer life. This way every worthy man becomes a prodromos (a forerunner, a precursor) who drafts the meaning of his existence neither from the past, nor from the present but from the future. He neglects the past and finds him self in an enduring conflict with the present…"

"The Heroic man feels himself chosen by Destiny as a fighter and a martyr -more like a martyr, as he never counts success with direct results, with numbers and proportions he doesn't count it at all. He is the lightning rod that attracts voluntarily all the storms and thunders so that the homes of the peaceful can remain safe. The reason he does it is by no means some spirit of altruism or self-sacrifice for the rest. In his quest for danger he is dragged by an irresistible attraction, by the aesthetics, the fascination of danger, the sense that it is a prerogative of the exquisite ones (and not a duty, nor a philanthropy) to be crashed for the others, under the others- the most valuable privilege! The Heroic man is not the fruit or the flower -these represent the present and its implicit joy. He is the seed to be buried and rot in order for the blooming and fruitening to emerge. He is the one buried for the resurrection to be celebrated, and there is no resurrection without a burial…"

"The Heroic man does not ignore the pleasures of Life but he only tastes them as much as necessary to overcome them, he only knows them as much as necessary to understand that in principle they paralyze his strength rather than enhance it, regardless if they grand him a feeling of intensity and expectance. Even more, these pleasures are a quest and a goal for someone who desires to take from Life not for him who has something to give to Life - and a man does not get rich by taking but by giving…"

"He enjoys many aspects of life simultaneously and he enjoys them not as an aesthetic display or a satisfaction to his curiosity he experiences all these forms inside him, he integrates them and attributes them with his own, personal way. His soul looks like oleaginous, fertile soil where every seed easily blooms and gives fruit. Thus he transforms himself without ever losing it. This multiplicity though does not bring splitting or loss of personal basis, diffusion and blaring of the personal nucleus -these happen to ordinary people when they try to acquire multiple aspects and characters. For the heroic man multiplicity does not hinder centralization but makes it more evident and mightier. He would not be a hero if he didn't have a powerful personality, if he didn't have a powerful central ego ("ego" meaning here the personal character and not the origin of egoism) that restrains the adventures of the soul and the incidents of the surrounding world, the flinging (ephemeral tendencies) and the interests (cares) in a well tied unity, not just of time but of logic cohesion and moral necessity. His personality is so rich that every aspect of it could - and does for many- comprise a whole different world, independent from the world that could be found in another of his aspects. So it is not strange that many people find these parts uncompromising to each other. But the Heroic man does not look like the nice and quite carriage drivers that drive their carriages safe and slow on peaceful streets right up to the end that others have paved for them. No! He looks like the charioteer dominating over four or eight angry horses - each horse speeding uncontrollable to the direction it craves. He governs them with a strong arm without, though, extinguishing their momentum and mutinous ness (tendency to be disobedient, revolutionarism). Otherwise he would find no attraction in charioteering! He doesn't know of "safe and sound"! Indeed Fight and Danger is his element, his food. Fight and Victory, not success. Success is not always victory. Victory is external, it means getting rich in profits and achievements - like the records of the modern runners, measured by fractions of seconds. On the contrary, he seeks the victory of him who enjoyed the fighting, the risking, of him who saw victory as an opportunity to live intense and suspenseful moments. And by all means victory coexists with failure, failure of the objective, like the "failure" of the 300 Spartans at Thermopile…"

"…He gives the impression of a lunatic, a mad man and he is indeed a mad man. He has the insaneness of a child, lacking this over celebrated experience of reality, which is nothing more than idlesse (laziness, kowardness) and lack of faith. He is a child because he still believes and he believes unconditionally. He is the eternal youth - he has no need of caution and prudence, these are for the quiet who pace safe and sound on the walk of life. The Heroic man never paces, he dances!…"

"He is never deceitful, this is only for those who putter with the others in order to copy them, envy them, or both they do this out of necessity because their own personality is not rich enough to satisfy them. On the contrary, the Heroic man is the center of himself, free in his isolation, aristocratic through the distance he keeps from the rest, unabashed (steadfast) through the courage of his personal opinion and his personal responsibility, prideful in the impassable temple of his solitude. That is why he doesn't allow himself to envy or compete with the rest, he has no need to confirm himself by the acknowledgement of the rest, that is by his excellence…"

"He undertakes labor with unreserved eagerness he accepts it evidently and joyfully as it is heavy and difficult, and for him life is all about action and toil. He works driven by his desire to use his physical and spiritual powers and he works aesthetically, like an athlete. He thinks the same way about his mental labor he doesn't study in order just to write a book or to accomplish a deed - thoughts for him are lively experiences, not something he would write down. He wants to be wealthier inside, to become richer through the joy he gets from a demanding task. He disperses very keenly a multitude of personal thoughts and syllogisms (personal even when he obtains the roots of his thoughts from others), a multitude that would be enviously guarded by someone else as his personal belonging. But the Heroic man ignores envy, and this is completely natural he retains and enshrines the character and the charisma of a genuine aristocrat: his solitude, his avoidance of intermingling, his courage and his ability to condemn, his long-lasting devotion and his noble generosity. Above all he cherishes the feeling of his personal Honor and compared to this everything else, wealth education authority or health, are just zero…"

"The Heroic man's life can only be short. Short, but not always in the common sense - he can very well live for many years but these years are never enough compared to the vastness of his vigorousness. Anyway, age is relevant. It is not measured by duration rather by substance. It is a moral not an astronomical concept. Though, usually, it is also short with in the common meaning of the term because the Heroic man spends his life in the hazardous front of battle. It is short because he is always in love with Death ("erasthithanatos")! He walks to Death not to rest, not because he is bored of living, not because he dismayed (became a coward) in front of it or because his strength faded. The Heroic man is not subject to Death! For him death is not suffering but acting! It is his final act that seals and gives meaning to all his previous acts. Life is an incessant beginning, and this beginning acquires its significance from the End, the End that is determined from this very beginning. Death is the End as well as the completion!…"

"Voluntary or not the Heroic man's Death is always like the explosion of a volcano. Suddenly his life's vessel ruptures and crashes smashing everything around it, covered in flames it burns everything else, illuminating it grants Light - and frightens the cowards and the humbles. Fury of the Lord….."
Posted by T.K. at 01:36