The Last Survivor from Fuhrer`s Bunker 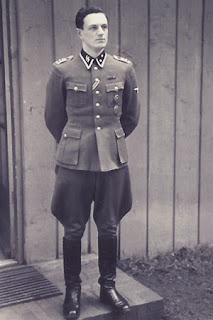 Some weeks ago there was documentary in Hellenic Tv about "The last survivor from Hitler`s Bunker". It was about the Life of Rochus Misch, the Fuhrer`s bodyguard which is still alive till these days. To my suprize , the documentary was pretty good! The local journalist visited Rochus Misch at his home in Berlin and did an in-depth interview with him about his life as Fuhrer`s bodyguard. The questions was really good and the whole conversation turned out very intresting.
Some days before documentary play in local tv , a comrade sent me a link to inform me about what day and hour exatly this will be played. I did not checked the link as the documentary was already widely advertized and it was already in my attention. Today , i found the link again and noticed that there is an english version there with photos, trailers and online interview with Rochus Misch. I`m pretty sure that many of you would like to see it:

To the suprize of many, R.Misch remain untill today a loyal SS man. He never did any apologizing statement, never regret that he was in Leibstantadarte SS "Adolf Hitler" , he still speaks with pride about his days there which described them as "The best period in my life". As you can see in documentary & Photos , R.Misch keep visitng the place that the bunker was and telling to the people that visiting the place (Turists , schools e.t.c.) the truth about the SS, Fuhrer , the last days in bunker e.t.c.