ALATRISTE: A Triumph of Honour, Courage and Patriotism! 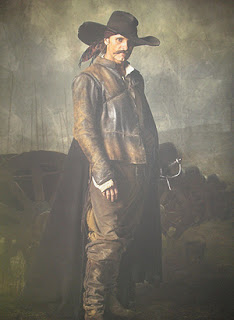 I finally managed to see the film "Alatriste". For those who have not heard of it yet , the film potray the life of Alatriste, a Spanish Captain and war veteran who lived in Spain of 1600`s .As i was expected it , the film is simply amazing! Vigo Mortensen (Which plays the role of "Alatriste") have done again an excellent performance.Another postive aspect is that the whole film is maded in Spanish language.
Searching in internet more info about the film, i found some very intresting things which i was not aware before. "Alatriste" is actually the hero of a novel series of a Spanish author named Arturo Perez-Reverte. The other 2 parts are "The Sun over Breda" and "Purity of Blood".
Here is a review for the book "Captain Alatriste" that will give you an idea also how the movie goes:

CAPTAIN ALATRISTE
"Perez-Reverte wrote the Captain Alatriste seies as a homage to the adventure books that had been his own initiation into the world of reading as a boy - books such as Dumas's The Three Musketeers. Captain Alatriste is a swordsman for hire in Spain in the 1620s - a time when Court intrigue was high and the decadent young king had dragged the country into a series of disastrous wars. As a hired 'blade', Alatriste becomes involved in many political plots and must live by his wits. He comes face to face with hired assassins, court players, political moles, smugglers, pirates and of course, the infamous Spanish Inquisition... All the stories are told by Inigo Balboa, Alatriste's young page. The cast of characters also includes Quevedo, an irrepressible subversive poet who likes to start fights in the local tavern, the kind-hearted innkeeper and ex-prostitute who shares Alatriste's bed, the elegant Count of Guadalmedina, the beautiful but deadly Angelica de Alquezar, and a whole host of underworld figures."
More info about the author you can find here : http://www.perez-reverte.com/

Its the first time that i come in touch with this author, so for sure i`m not the perfect guy to give you more details about his books.Though , i hope the books to be already translated in other languages as it will be something that i`ll for sure look to read in the near future.
If you want more info about "Alatriste" , wikipedia have many details about the film and links for trailers e.t.c.
http://en.wikipedia.org/wiki/Alatriste

Another reccommended film which the praise the values of Honour, Courage, Patriotism, the life code and fighting spirit of the real European man!
Posted by T.K. at 20:24