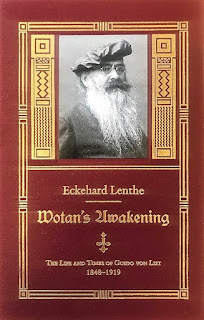 Wotan’s Awakening: The Life and Times of Guido von List, 1848–1919
by Eckehard Lenthe
Translated by Annabel Lee
488 pages, 6” x 9”, high-quality interior stock, sewn signatures, bound in burgundy cloth with foil stamping and inlaid portrait.
This is the ultimate biography of the Austrian occultist and rune-mystic Guido von List (1848–1919), a key figure in the esoteric Germanic revival who was occupied with questions of language, the occult, mythology, history, and national identity. This was a tumultuous time in central Europe, spanning from the era of industrial and democratic revolutions to the catastrophe of the first World War and the complete dissolution of the Austrian Empire.
Guido von List dedicated himself to researching, defending, and nourishing archaic Germanic traditions. He was an adventurer, mountaineer, and renaissance man who expressed his ideas in various ways, among them as a playwright, editor, journalist, and author. His life intersected with other important figures of the day: philosophers, pagan theologists and theosophists, artists, politicians, and writers.
List sought to understand the spiritual landscape that lies under the visible one, and he anchored the present to the past by drawing attention to the magical landscape of his native land, unlocking the secrets of its place-names and hidden symbols. List’s special interests included mythology, heraldry, etymology, history, and folklore—disciplines in which he rediscovered ancient Germanic themes and brought them once more into the light.
Illustrated with numerous rare images, this biography was written with great care and detail and represents a unique and sympathetic insider’s view. Much of the information in the book derives from the author’s extensive personal archives, which are the harvest of decades of research. Beyond the fascinating story of List’s life, Wotan’s Awakening contains extensive appendices and bibliographies, making it a primary sourcebook on fin-de-siècle Austria and Germany, and the lesser-known spiritual, cultural, and political currents of the age.
Wotan’s Awakening is impeccably designed in the style of the original publications of the Guido von List Society. The book is now available in a deluxe limited edition of 400 copies. Each book also includes a few special enclosures.
Price: $60 postpaid in the USA; $75 postpaid to Canada; $80 postpaid to Europe; $85 postpaid to the rest of the world.
Paypal payments to: dominionpress@comcast.net
Posted by T.K. at 21:20