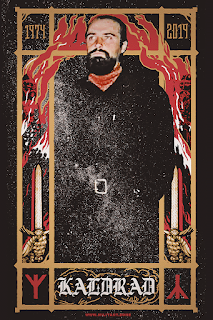 ASGARDSREI 2019 – in memory of KALDRAD

A month has passed since Kaldrad’s death – a tragic accident brought to an end a life story worthy of skaldic songs and sagas. A life that has been devoted to one goal – keeping alive the fire of European tradition that runs through our veins.

The founding figure behind the legendary BlazeBirthHall, Kaldrad’s influence on Eastern European Black Metal scene is impossible to overstate. Branikald, Forest, Nitberg, Vandal – these are just a few names that secured Kaldrad a cult status among the young, angry and fearless generation that came after the fall of the Soviet state. Releasing his first demo "Stormheit" as early as 1994, Kaldrad laid path to radical pagan revival and spiritual elitism for all the Russian (as well as Slavic in broader sense) bands that followed later in 90s.

Having the honor of knowing Kaldrad personally for a long time and staying side by side until his last days, we believe it’s our duty to commemorate Kaldrad by dedicating this year’s ASGARDSREI fest to his memory.
Written by ASGARDSREI crew