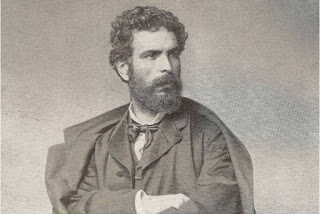 Nikolaos Gyzis was born in the village of Sklavohori, in Tinos island on the 1st of March 1842, and died in Munich, on the 4th of January 1901. He is considered to be one of the most important Greek painters of the 19th century, of the so called “Munich School”. Throughout his studies he acoomplished great things, and won many prizes in block print, painting and etching.

He grew up in a family of six children. His father, Onoufrios was a carpenter, and his mother, Margarita, a housewife. His family decided to move to Athens in 1850, and that is when the young Nikolaos decides to study at the Athens School of Fine Arts, first as an auditor, and then as a full time student (1854-1864).

In the last years of his studies he meets the rich art lover Nikolaos Nazos, who played a great role in Gyzi’s scholarship from the Institution “Naos tis Evagelistrias tis Tinou”, with which he managed to continue his studies in the Academy of Fine Arts in Munich.

Gyzis moved to Munich in June 1865, where he met his friend and colleague, Nikiforos Lytras. Nikiforos helped him adjust quickly in the german atmosphere of the time. Hermann Anschütz and Alexander Wagner were his first mentors in Munich. In June 1968 he was accepted to study in the Karl von Piloty laboratory. He completed his studies in Munich in 1871, and the April of the next year Gyzis returned to Athens, in order to transform his family home (Themistokleous street) into an atelier. Along with Nikiforos Lytras, he traveled in 1873 to Asia Minor......

Several of his works to the videos that follows: