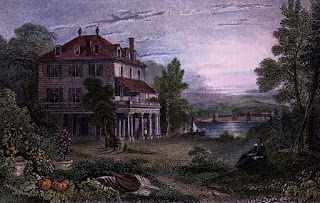 "A menagerie, with eight enormous dogs, three monkeys, five cats, an eagle, a crow, and a falcon: and all these, except the horses, walk about the house, which every now and then resounds with their unarbitrated quarrels, as if they were masters of it."

In 1816, Lord Byron rented the manor known as the Villa Diodati, near Cologny, on Lake Geneva. The house already had solid literary credentials. Its original owner, Giovanni Diodati, had translated the Bible into Italian and French, and the poet John Milton (whom Mary would quote in Frankenstein) is said to have vacationed there in 1639.

Byron was joined that fateful summer by his personal physician, John Polidori, and his guests: Percy Bysshe Shelley, Mary Godwin (soon to be Shelley), and Claire Claremont. It was here that ghosts stories were read aloud, and at the nearby guesthouse where she resided that Mary conceived of Frankenstein and first wrote these words that, slightly edited, would open chapter five of the book: “It was on a dreary night of November that I beheld my man completed…”

The villa still stands. It is the square building, right of center, in the GoogleEarth image below. 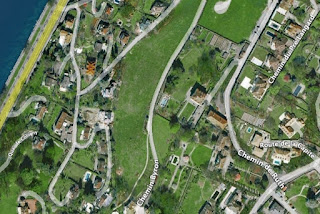