Ghosts of The Past PART 2 - The Wolf House 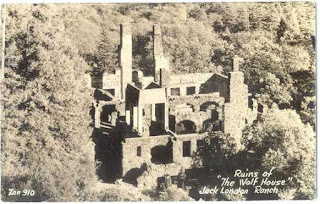 Jack London wrote so many books about wolves and dogs that his friend George Sterling gave him the nickname 'The Wolf'. So when Jack started to build his dream house in 1911, it was only fitting that people would call it the 'Wolf House'.

Jack and Charmian never got to live in their home because one hot summer night in August 1913, spontaneous combustion started a fire in the house. Nobody was living near the house so the fire was quite advanced before anyone became aware of it. The Londons were sleeping in the Cottage about a half mile away and were awakened by a farm worker who saw the red glow in the sky. They got on their horses and rode to their beloved dream house. By the time they got there, the house was completely engulfed in flames and beyond saving. Although Jack vowed to rebuild the house, he did not live long enough to rebuild. Today, we have a beautiful ruin. 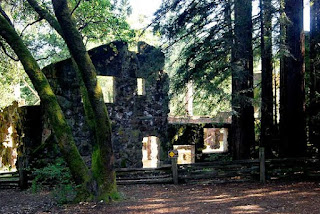 "All I wanted was a quiet place in the country to write and loaf in, and get out of nature that something which we all need, only the most of us don't know it.  This is to be no summer-residence proposition, but a home all the year round.  I am anchoring good and solid, and anchoring for keeps."