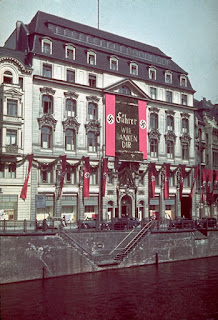 "Obedient historians have often enough dignified emperors and kings, nobles and the powerful, with the flattering term “the Great,” without however ensuring that these fine men actually went down that way in the book of world history.

In reality, the great men of history are rare. There are even whole centuries that lack a towering historic figure.

The historically great are those few personalities who stamp a whole epoch with their will, which lives on into the future and entirely changes the political order.

Great men are also rare because the unity of idea and will, of desire and action is so seldom achieved.

As we celebrate today the birthday of our Führer and bow before the greatness of this man, we have both the right and duty as people who think politically — beyond all cheap outward enthusiasm — to ask what is behind this greatness.

Deceived by liberal superficiality during the bourgeois era, people said that character was molded by the environment. The Führer refutes this persuasively: He worked hard to build his will and knowledge such that he became one of the deepest experts not only on the German nature, but on the deep political connections of world politics. The Führer’s ruthless self discipline gave him the strength of his convictions and the unshakable confidence of a genius who reaches his goals through the full force of his will.

The Führer has never been given anything, nor has he allowed himself to be given anything. All that he has, both intellectually and spiritually, he won himself! The blows of fate that he suffered from his youngest days onward made him harder and more passionate. He thus developed a character not dependent on a more or less hostile environment, but rather one able to stand against any opposition. 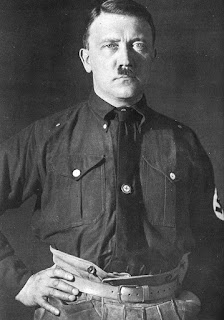 The World War was the last test of his character: with pride the Führer has always said that he learned as a simple soldier to bear the full weight of war! The war did not break him, but rather enabled him to understand more clearly and plainly the reality of life.

As chaos fell over Germany after 1918, the wisdom of those philosophers and poets who proclaimed that only character can survive defeat and collapse was proven.

In the familiar words of the Greek writer of tragedy, there is much that is powerful, but nothing that is more powerful than man. His words find amazing proof in the Führer, a single man with one goal who applied his passionate will in a time that lacked will. A single man proclaimed freedom during the years of slavery!

Coming ages will see the Führer as an almost mythic figure who did not only stand against the flow of a worthless era, but rather against a whole avalanche of apparently irresistible fate. He stood up as Germany was in danger of vanishing into the mists of history, changing history’s very direction.

We remember the catastrophic years that began in 1919. We remember the disgrace of Versailles, Germany’s enslavement, terrible arbitrary international forces.

While “well-meaning” bourgeois circles at best were dreaming that one day freedom would once more shine on Germany, the Führer pondered and labored to realize his idea of freedom, which had as its presupposition the mobilization of the German soul. Year in, year out, first unnoticed, then piled high with suspicion, envy, and ridicule, the Führer wandered through Germany and woke the best of the nation, leading them to self-awareness, forcing them under his prophetic will. The National Socialist movement developed as a gathering of those Germans who no longer wanted something for themselves, but rather thought only of Germany and of the eternal life of the nation.

When the seizure of power came in 1933, bourgeois politicians probably thought that the Führer has achieved the goal of his struggle. Those who saw, or at least sensed more deeply, realized that it was only the starting point for the second and most difficult phase of the Führer’s great struggle."