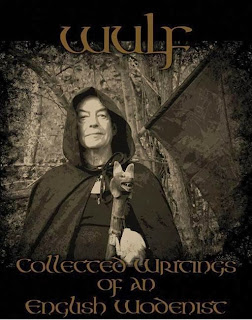 As a well-respected Heathen mystic and charismatic founder of Woden's Folk, Wulf is a man of many talents and has studied the Anglo-Saxon futhork for many years. In his own words: "Ours is a polytheistic faith with various gods and goddesses, and is based upon a Nature-Religion that upholds Natural Law, and a Warrior-Religion that upholds the concept of the Virile Male Warrior and the Männerbünde as the basis of recreating this archetype." Based in East Sussex, where he developed a strong affinity with the mysterious Long Man of Wilmington, Wulf is also a keen survivalist and champion of English identity. He has organised Wodenist camps, hikes and moots throughout the country, elaborating upon his belief that the English people are in desperate need of a dynamic folk-religion that is completely in tune with their own distinct values. Wulf has also formulated a new runic concept known as the "Ar-Kan Rune-Lag" system. Contents include The Mysteries of the Black Sun, The Divine Blood of the Solar Race, The Kosmic Krist, Land of the Hyperboreans, The Teutonic Männerbünde, Woden the Initiator, The Awakening of the Fire-Serpent, Wændel: The World-Turner, The Concept of an Avatar, The Mystery of the Fool, The Fylfot-Swastika, Fire & Flood, The Dawn of a New Age, The Coming of HelgiH, The Sun-Initiation, The Secret of Ing, Wulfingas: Sons of the Wolf, House of the Dragon, The ‘Messiah’, The Thief’s Way, The Wolf-God, Cycles of the Ages, The Resurrection of the Fool, The Aryan English, The Serpent-Slayer, The Dark Lord, The Island Dragons, The Sons of Ingwé, The Saxon Nation, The Legend of Manu, The Golden Age, The Woden Folk-Religion, The Seventh Sword, Wulf’s Prophecy, The White Dragon of the English, Wid-Ar the Avenger: The Coming God, The Vril, At-al-land, The Aryan Race, The Wolsunga Race, War of the Worlds, The Resurrection of the Arya, The Silent God, and The White Krist of Revelation.