Golden Dawn amongst REUTER`S "Best Photos of the year 2013"

At December 2,  a photo from a Golden Dawn rally (IMIA march) ended in number 36 in REUTER`S 93 "Best Photos of the year 2013"
Quite suprized i must say from this choice from REUTERS.  If someone had told me that back in the 90`s,  when few dozens of people start the annual IMIA march , i`ll had definitely take him for a lunatic or something like that. Yet here we are in 2013 that Golden Dawn is a political force that now is very "famous" , even outside Hellas.


Here is the photo and the words from the photographer that took it:

In this showcase of some of Reuters' most memorable photos, the photographers offer a behind the scenes account of the images that helped define the year.
http://blogs.reuters.com/fullfocus/2013/12/01/best-photos-of-the-year-2013/#a=1 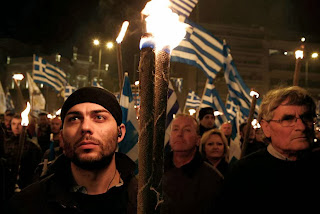 “It was one of those photo shoots that you don’t really want to go to as you know you will not be welcomed as a member of the press.

A rally on February 2nd to mark the death of three Greek military officers who were killed during the crisis between Greece and Turkey over Imia, an islet in the eastern Aegean Sea, turned into a mass gathering of supporters of the extreme-right Golden Dawn party.More than 2,000 people demonstrated holding Greek flags and torches, most of them dressed in black and with an aggressive attitude towards anyone who was not clearly affiliated with their party.

This picture was taken at the end of the rally, when the Golden Dawn supporters were about to begin marching to their party’s headquarters.

Golden Dawn entered parliament for the first time in 2012 elections, held during an extremely tough financial crisis, the country’s worst since World War Two. It won seven percent of the vote and 18 seats at the 300-seat Greek parliament.”

Caption: Supporters of the extreme-right Golden Dawn party hold torches during a gathering in Athens February 2, 2013.