What Happens In Afterlife? Part I 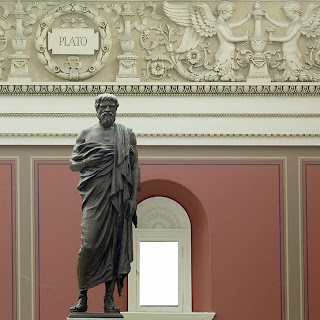 in my previous post that you can see HERE ,i spoke about my fave parts from Plato`s "The Republic". Now here another intresting part. Its about what happens in afterlife. Keep in mind that Plato , is not just "a philosopher" , but one of the most important writers in history of the European civilization. Oftenly through his dialogues he reveals secrets about life & death.Besides, Plato himself was a great initiate of the Eleusinian Mysteries. So he knew things that other writters of his time did not knew.

Below is the part of what happens in afterlife. Its one of the most intresting pieces i have ever read in my life so far, very in-depth and with a lot of details e.t.c.
Read it CAREFULLY!

Taken from "The Republic" , Chapter X. The Recompense of Life
Translated by Benjamin Jowett

"Well, I said, I will tell you a tale; not one of the tales which Odysseus tells to the hero Alcinous, yet this too is a tale of a hero, Er the son of Armenius, a Pamphylian by birth. He was slain in battle, and ten days afterwards, when the bodies of the dead were taken up already in a state of corruption, his body was found unaffected by decay, and carried away home to be buried. And on the twelfth day, as he was lying on the funeral pile, he returned to life and told them what he had seen in the other world. He said that when his soul left the body he went on a journey with a great company, and that they came to a mysterious place at which there were two openings in the earth; they were near together, and over against them were two other openings in the heaven above. In the intermediate space there were judges seated, who commanded the just, after they had given judgment on them and had bound their sentences in front of them, to ascend by the heavenly way on the right hand; and in like manner the unjust were bidden by them to descend by the lower way on the left hand; these also bore the symbols of their deeds, but fastened on their backs. He drew near, and they told him that he was to be the messenger who would carry the report of the other world to men, and they bade him hear and see all that was to be heard and seen in that place. Then he beheld and saw on one side the souls departing at either opening of heaven and earth when sentence had been given on them; and at the two other openings other souls, some ascending out of the earth dusty and worn with travel, some descending out of heaven clean and bright. And arriving ever and anon they seemed to have come from a long journey, and they went forth with gladness into the meadow, where they encamped as at a festival; and those who knew one another embraced and conversed, the souls which came from earth curiously enquiring about the things above, and the souls which came from heaven about the things beneath. And they told one another of what had happened by the way, those from below weeping and sorrowing at the remembrance of the things which they had endured and seen in their journey beneath the earth (now the journey lasted a thousand years), while those from above were describing heavenly delights and visions of inconceivable beauty. The Story, Glaucon, would take too long to tell; but the sum was this: — He said that for every wrong which they had done to any one they suffered tenfold; or once in a hundred years — such being reckoned to be the length of man's life, and the penalty being thus paid ten times in a thousand years. If, for example, there were any who had been the cause of many deaths, or had betrayed or enslaved cities or armies, or been guilty of any other evil behaviour, for each and all of their offences they received punishment ten times over, and the rewards of beneficence and justice and holiness were in the same proportion. I need hardly repeat what he said concerning young children dying almost as soon as they were born. Of piety and impiety to gods and parents, and of murderers, there were retributions other and greater far which he described. He mentioned that he was present when one of the spirits asked another, "Where is Ardiaeus the Great?" (Now this Ardiaeus lived a thousand years before the time of Er: he had been the tyrant of some city of Pamphylia, and had murdered his aged father and his elder brother, and was said to have committed many other abominable crimes.) The answer of the other spirit was: "He comes not hither and will never come. And this," said he, "was one of the dreadful sights which we ourselves witnessed. We were at the mouth of the cavern, and, having completed all our experiences, were about to reascend, when of a sudden Ardiaeus appeared and several others, most of whom were tyrants; and there were also besides the tyrants private individuals who had been great criminals: they were just, as they fancied, about to return into the upper world, but the mouth, instead of admitting them, gave a roar, whenever any of these incurable sinners or some one who had not been sufficiently punished tried to ascend; and then wild men of fiery aspect, who were standing by and heard the sound, seized and carried them off; and Ardiaeus and others they bound head and foot and hand, and threw them down and flayed them with scourges, and dragged them along the road at the side, carding them on thorns like wool, and declaring to the passers-by what were their crimes, and that they were being taken away to be cast into hell." And of all the many terrors which they had endured, he said that there was none like the terror which each of them felt at that moment, lest they should hear the voice; and when there was silence, one by one they ascended with exceeding joy. These, said Er, were the penalties and retributions, and there were blessings as great."