PLATO`s Myth of the Cave 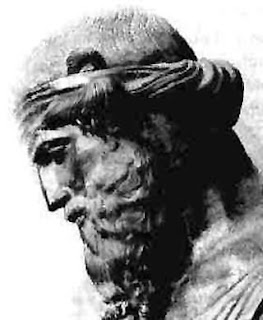 How many of you are truly familiar with the works of the divine Plato? Here is a part taken from his masterpiece "The Republic" (Or "The State").It says and reveals a lot for those with eyes to see. For those who dont know. Plato always writing his works in a form of a dialogue and he always speaks through Socrates. "The Myth of the Cave" is one of my fave parts. Another one is what happens in afterlife. If i`ll find a reliable traslation i`ll post it here in future. Till then , read CAREFULLY this one that follow... 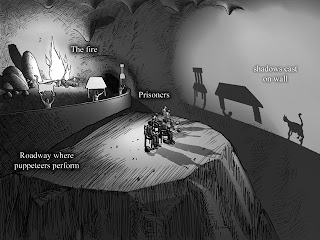 The Myth of the Cave

And now, I said, let me show in a figure how far our nature is enlightened or unenlightened:--Behold! human beings living in an underground den, which has a mouth open towards the light and reaching all along the den; here they have been from their childhood, and have their legs and necks chained so that they cannot move, and can only see before them, being prevented by the chains from turning round their heads. Above and behind them a fire is blazing at a distance, and between the fire and the prisoners there is a raised way; and you will see, if you look, a low wall built along the way, like the screen which marionette players have in front of them, over which they show the puppets.

And do you see, I said, men passing along the wall carrying all sorts of vessels, and statues and figures of animals made of wood and stone and various materials, which appear over the wall? Some of them are talking, others silent.


You have shown me a strange image, and they are strange prisoners.


Like ourselves, I replied; and they see only their own shadows, or the shadows of one another, which the fire throws on the opposite wall of the cave?


True, he said; how could they see anything but the shadows if they were never allowed to move their heads?


And of the objects which are being carried in like manner they would only see the shadows?

And if they were able to converse with one another, would they not suppose that they were naming what was actually before them?

And suppose further that the prison had an echo which came from the other side, would they not be sure to fancy when one of the passers-by spoke that the voice which they heard came from the passing shadow?

No question, he replied.

To them, I said, the truth would be literally nothing but the shadows of the images.

And now look again, and see what will naturally follow if the prisoners are released and disabused of their error. At first, when any of them is liberated and compelled suddenly to stand up and turn his neck round and walk and look towards the light, he will suffer sharp pains; the glare will distress him, and he will be unable to see the realities of which in his former state he had seen the shadows; and then conceive some one saying to him, that what he saw before was an illusion, but that now, when he is approaching nearer to being and his eye is turned towards more real existence, he has a clearer vision,--what will be his reply? And you may further imagine that his instructor is pointing to the objects as they pass and requiring him to name them,--will he not be perplexed? Will he not fancy that the shadows which he formerly saw are truer than the objects which are now shown to him?

And if he is compelled to look straight at the light, will he not have a pain in his eyes which will make him turn away to take refuge in the objects of vision which he can see, and which he will conceive to be in reality clearer than the things which are now being shown to him?

And suppose once more, that he is reluctantly dragged up a steep and rugged ascent, and held fast until he is forced into the presence of the sun himself, is he not likely to be pained and irritated? When he approaches the light his eyes will be dazzled, and he will not be able to see anything at all of what are now called realities.

Not all in a moment, he said.

Last of all he will be able to see the sun, and not mere reflections of him in the water, but he will see him in his own proper place, and not in another; and he will contemplate him as he is.

He will then proceed to argue that this is he who gives the season and the years, and is the guardian of all that is in the visible world, and in a certain way the cause of all things which he and his fellows have been accustomed to behold?

Clearly, he said, he would first see the sun and then reason about him.

And when he remembered his old habitation, and the wisdom of the den and his fellow-prisoners, do you not suppose that he would felicitate himself on the change, and pity them?

And if they were in the habit of conferring honors among themselves on those who were quickest to observe the passing shadows and to remark which of them went before, and which followed after, and which were together; and who were therefore best able to draw conclusions as to the future, do you think that he would care for such honors and glories, or envy the possessors of them? Would he not say with Homer,

Better to be the poor servant of a poor master, and to endure anything, rather than think as they do and live after their manner?

Yes, he said, I think that he would rather suffer anything than entertain these false notions and live in this miserable manner.

Imagine once more, I said, such a one coming suddenly out of the sun to be replaced in his old situation; would he not be certain to have his eyes full of darkness?

To be sure, he said.

And if there were a contest, and he had to compete in measuring the shadows with the prisoners who had never moved out of the den, while his sight was still weak, and before his eyes had become steady (and the time which would be needed to acquire this new habit of sight might be very considerable), would he not be ridiculous? Men would say of him that up he went and down he came without his eyes; and that it was better not even to think of ascending; and if any one tried to loose another and lead him up to the light, let them only catch the offender, and they would put him to death.

No question, he said.


This entire allegory, I said, you may now append, dear Glaucon, to the previous argument; the prison-house is the world of sight, the light of the fire is the sun, and you will not misapprehend me if you interpret the journey upwards to be the ascent of the soul into the intellectual world according to my poor belief, which, at your desire, I have expressed--whether rightly or wrongly God knows. But whether true or false, my opinion is that in the world of knowledge the idea of good appears last of all, and is seen only with an effort; and, when seen, is also inferred to be the universal author of all things beautiful and right, parent of light and of the lord of light in this visible world, and the immediate source of reason and truth in the intellectual; and that this is the power upon which he would act rationally either in public or private life must have his eye fixed.

I agree, he said, as far as I am able to understand you.

Moreover, I said, you must not wonder that those who attain to this beatific vision are unwilling to descend to human affairs; for their souls are ever hastening into the upper world where they desire to dwell; which desire of theirs is very natural, if our allegory may be trusted.

And is there anything surprising in one who passes from divine contemplations to the evil state of man, misbehaving himself in a ridiculous manner; if, while his eyes are blinking and before he has become accustomed to the surrounding darkness, he is compelled to fight in courts of law, or in other places, about the images or the shadows of images of justice, and is endeavoring to meet the conception of those who have never yet seen absolute justice?

Anything but surprising, he replied.

Any one who has common sense will remember that the bewilderments of the eyes are of two kinds, and arise from two causes, either from coming out of the light or from going into the light, which is true of the mind's eye; and he who remembers this when he sees any one whose vision is perplexed and weak, will not be too ready to laugh; he will first ask whether that soul of man has come out of the brighter life, and is unable to see because unaccustomed to the dark, or having turned from darkness to the day is dazzled by excess of light. And he will count the one happy in his condition and state of being, and he will pity the other; or, if he have a mind to laugh at the soul which comes from below into the light, there will be more reason in this than in the laugh which greets him who returns from above out of the light into the den.

That, he said, is a very just distinction.

But then, if I am right, certain professors of education must be wrong when they say that they can put a knowledge into the soul which was not there before, like sight into blind eyes.

They undoubtedly say this, he replied.

Whereas our argument shows that the power and capacity of learning exists in the soul already; and that just as the eye was unable to turn from darkness to light without the whole body, so too the instrument of knowledge can only by the movement of the whole soul be turned from the world of becoming into that of being, and learn by degrees to endure the sight of being and of the brightest and best of being, or in other words, of the good. 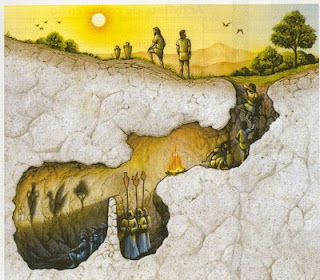