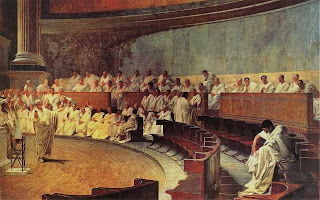 A Nation can survive with its benevolent, even with its ambitious. But it canʼt survive from an inside treason. The enemy outside of the gates (of the Nation) is less intimidating, because he is visible and he raises his banner openly. But the Traitor is moving among them (the citizens) within the gates, freely, his treacherous whispers whistling through all the paths, heard even to the halls of the Government itself. The Traitor appears not as a Traitor. He speaks in familiar tone to his victims, he simulates them and their anxiety, he appeals to the vulgarity that exists in the depths of every manʼs soul. He rots the soul of the Nation, working secretly and anonymously in the night to corrodes the foundations of the city, he corrupts the elected leaders, in order not to be able to resist anymore. An assassin, is less to be feared.