What Happens In Afterlife? Part II

"Now when the spirits which were in the meadow had tarried seven days, on the eighth they were obliged to proceed on their journey, and, on the fourth day after, he said that they came to a place where they could see from above a line of light, straight as a column, extending right through the whole heaven and through the earth, in colour resembling the rainbow, only brighter and purer; another day's journey brought them to the place, and there, in the midst of the light, they saw the ends of the chains of heaven let down from above: for this light is the belt of heaven, and holds together the circle of the universe, like the under-girders of a trireme. From these ends is extended the spindle of Necessity, on which all the revolutions turn. The shaft and hook of this spindle are made of steel, and the whorl is made partly of steel and also partly of other materials. Now the whorl is in form like the whorl used on earth; and the description of it implied that there is one large hollow whorl which is quite scooped out, and into this is fitted another lesser one, and another, and another, and four others, making eight in all, like vessels which fit into one another; the whorls show their edges on the upper side, and on their lower side all together form one continuous whorl. This is pierced by the spindle, which is driven home through the centre of the eighth. The first and outermost whorl has the rim broadest, and the seven inner whorls are narrower, in the following proportions — the sixth is next to the first in size, the fourth next to the sixth; then comes the eighth; the seventh is fifth, the fifth is sixth, the third is seventh, last and eighth comes the second. The largest (of fixed stars) is spangled, and the seventh (or sun) is brightest; the eighth (or moon) coloured by the reflected light of the seventh; the second and fifth (Saturn and Mercury) are in colour like one another, and yellower than the preceding; the third (Venus) has the whitest light; the fourth (Mars) is reddish; the sixth (Jupiter) is in whiteness second. Now the whole spindle has the same motion; but, as the whole revolves in one direction, the seven inner circles move slowly in the other, and of these the swiftest is the eighth; next in swiftness are the seventh, sixth, and fifth, which move together; third in swiftness appeared to move according to the law of this reversed motion the fourth; the third appeared fourth and the second fifth. The spindle turns on the knees of Necessity; and on the upper surface of each circle is a siren, who goes round with them, hymning a single tone or note. The eight together form one harmony; and round about, at equal intervals, there is another band, three in number, each sitting upon her throne: these are the Fates, daughters of Necessity, who are clothed in white robes and have chaplets upon their heads, Lachesis and Clotho and Atropos, who accompany with their voices the harmony of the sirens — Lachesis singing of the past, Clotho of the present, Atropos of the future; Clotho from time to time assisting with a touch of her right hand the revolution of the outer circle of the whorl or spindle, and Atropos with her left hand touching and guiding the inner ones, and Lachesis laying hold of either in turn, first with one hand and then with the other. 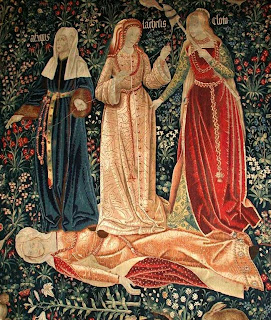 
When Er and the spirits arrived, their duty was to go at once to Lachesis; but first of all there came a prophet who arranged them in order; then he took from the knees of Lachesis lots and samples of lives, and having mounted a high pulpit, spoke as follows: "Hear the word of Lachesis, the daughter of Necessity. Mortal souls, behold a new cycle of life and mortality. Your genius will not be allotted to you, but you choose your genius; and let him who draws the first lot have the first choice, and the life which he chooses shall be his destiny. Virtue is free, and as a man honours or dishonours her he will have more or less of her; the responsibility is with the chooser — God is justified." When the Interpreter had thus spoken he scattered lots indifferently among them all, and each of them took up the lot which fell near him, all but Er himself (he was not allowed), and each as he took his lot perceived the number which he had obtained. Then the Interpreter placed on the ground before them the samples of lives; and there were many more lives than the souls present, and they were of all sorts. There were lives of every animal and of man in every condition. And there were tyrannies among them, some lasting out the tyrant's life, others which broke off in the middle and came to an end in poverty and exile and beggary; and there were lives of famous men, some who were famous for their form and beauty as well as for their strength and success in games, or, again, for their birth and the qualities of their ancestors; and some who were the reverse of famous for the opposite qualities. And of women likewise; there was not, however, any definite character them, because the soul, when choosing a new life, must of necessity become different. But there was every other quality, and the all mingled with one another, and also with elements of wealth and poverty, and disease and health; and there were mean states also. And here, my dear Glaucon, is the supreme peril of our human state; and therefore the utmost care should be taken. Let each one of us leave every other kind of knowledge and seek and follow one thing only, if peradventure he may be able to learn and may find some one who will make him able to learn and discern between good and evil, and so to choose always and everywhere the better life as he has opportunity. He should consider the bearing of all these things which have been mentioned severally and collectively upon virtue; he should know what the effect of beauty is when combined with poverty or wealth in a particular soul, and what are the good and evil consequences of noble and humble birth, of private and public station, of strength and weakness, of cleverness and dullness, and of all the soul, and the operation of them when conjoined; he will then look at the nature of the soul, and from the consideration of all these qualities he will be able to determine which is the better and which is the worse; and so he will choose, giving the name of evil to the life which will make his soul more unjust, and good to the life which will make his soul more just; all else he will disregard. For we have seen and know that this is the best choice both in life and after death. A man must take with him into the world below an adamantine faith in truth and right, that there too he may be undazzled by the desire of wealth or the other allurements of evil, lest, coming upon tyrannies and similar villainies, he do irremediable wrongs to others and suffer yet worse himself; but let him know how to choose the mean and avoid the extremes on either side, as far as possible, not only in this life but in all that which is to come. For this is the way of happiness."