When the "wolves" became Pigs...

As i said in the previous post , in Hellas there is still people that will not tolerate the bullshit of the goverment and the media about the so-called "greek-turkish friendship".
Few weeks ago there was some news in local blogs about offices(!!!) of the famous turkish party "grey wolves" in Hellas!(In Elefsina , few km outside Athens). As you might know this party is famous for its anti-european rhetoric , with cells in some european countries (Belgium , Germany e.t.c.) and also responsible for drug dealing, prostitution e.t.c Its also widely known that its totally controlled by MIT (The turkish secret agents) as its the weapon(amongst others) for promoting the turkish intrests in Europe.
Few days ago some unknown but True Greeks, decided to give a message to the "wolves" that here is Hellas, and such things will not be tolerated. In the photos below you can see the "message". 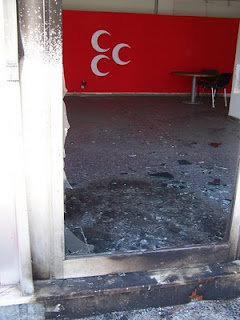 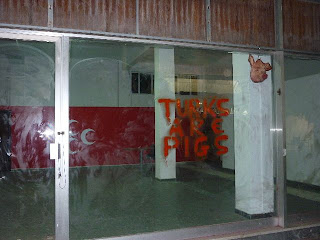 The photos are taken from :
http://esxatianasxesi.blogspot.com/
http://www.elliniki-grothia.com/
Posted by T.K. at 23:56