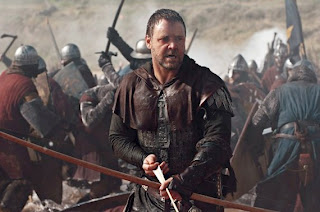 Ok, went yesterday to see the long-anticipated movie of Ridley Scott, "Robin Hood". Well, i can`t say that the movie satisfied my expectations. I was asking much more from the film. The whole story is actually before Robin become the famous outlaw, it was about what lead him to become. The movie starts with Richard The Lionheart returning from the 3rd Crusade. Robin(Here he have the surname "Longstryde") was an archer in his army. Later Robin fight against the Norman invaders.

Positives: Nice costumes, excellent looking locations capturing perfectly the 12th century England, nice scene battles. No surrealistic scenes portaying negroes or asiatics in medieval clothes or as superman heroes (Of the "good" side always). Max von Sydow is a living legend and its always a plus to every film he participate. Also a really important thing (At least for me) is that each army was speaking its own language.

Negatives: Playtime was too big (2 h & 20 min. Less 30 min would be really nice), Some really expected and overused "funny" dialogues from time to time (There is already few Robin Hood films out there, something more unusual would fit better). And as i said above there is some nice battles, but a litle bit more violent scenes would not hurt. Also lets not forget the obvious masonic message (With his father profession as builder and yes, the "human rights declaration" in 12th century in England sounds like a bad joke indeed).

In the end, the film is not that bad, just do not expect to see any masterpiece or the film of the year. Apart from all these, its an intresting film for sure. Nothing more nothing less.