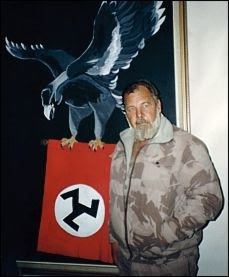 Eugene Terreblanche was murdered on his farm today just outside Ventersdorp. He was attacked while sleeping by two workers that worked on the farm. According to the workers they got in a argument earlier upon which they responded with a panga and a "knopkierie".

The time they attacked Eugene was around 5pm, when police got there he was lying on the bed with serious head wounds and wounds to his upper body. He was still alive but later died in hospital at around 7pm.

According to the workers that attacked him they got in a argument, police said the attack was not politically motivated but that will only be revealed if true during the investigation.
The police arrested the two suspects who confessed to the killing. Eugene did not permanantly live on the farm but slep there once in a while.

While the police say the murder was not politically motivated we as mentioned earlier will only learn the real motive for the attack later.

Social networks are buzzing with many saying that this is because of Julius Malema's recent "kill the boer" campaign.

Last week Julius Malema was ordered by the court to stop singing the "kill the boer" or "shoot the boer" song.

Eugene Ney TerreBlance was born on January 31 1941 and was a Boer Afrikaner the founder of the Afrikaner weerstadsbeweging. His biggest dream was a boer state and he pushed and fighted for that most of his life.

We can only say that Eugene Terreblanche loved his country and was a strong fighter in what he believed.

STATEMENT BY THE AWB

Details are sketchy, but from reports by people at the scene there was an argument with one of his black farm workers this afternoon. Later, while he was taking an afternoon nap, the farm worker, incited by others, entered his house and hacked him to death with a panga (chopping knife used for clearing bushes).

When police arrived they found our leader on his bed with mortal wounds to his upper body and head. He was declared dead at 7:00pm.

This news comes amidst reports of Julius Malema's banned song which calls for freedom fighters of the ANC to "Kill the Boer".

Our leader did not live permanently on the farm, but rather in Ventersdorp. He visits the farm regularly during the week and on weekends.

Eugene Ney Terre'Blance was born on January 31 1941 and was on of the founders of the Afrikaner Weerstadsbeweging. He dedicated the last decades to realising a dream of freedom for our Boer people and the concept of a Volkstaat, a free state where we could rule over ourselves.

We call on all our supporters, friends and members of the AWB to be calm for now as we mourn the passing of our leader.

We will post more information as it becomes available. 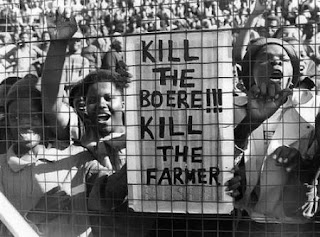