HARROGATE, England — Colin Jordan, the elder statesman of National Socialism in Britain and a powerful voice of postwar National Socialism around the world, has died. He was 85.Born in 1923, Jordan was educated at Warwick School and between 1946 and 1949 at Cambridge University, where he graduated with honors in history.

At Cambridge Jordan formed the Nationalist Club, from where he was invited to join the short-lived British Peoples Party, a group of former British Union of Fascists members led by Lord Tavistock, heir to the Duke of Bedford. Jordan soon became associated with the prewar National Socialist leader Arnold Leese and was left a property in Leese's will, which became the base of operations when Jordan launched the White Defence League in 1956. Jordan later merged this organization with the National Labor Party to form the British National Party in 1960, which he left following a dispute over his advocacy of open National Socialism.

After leaving Cambridge, Jordan taught mathematics at a secondary school in Coventry, until he was banned because of his racial-nationalist activities. As a result he founded the National Socialist Movement [not to be confused with a group with similar name in the United States] in 1962, along with John Tyndall. The two were successful in eluding authorities to bring the banned American National Socialist George Lincoln Rockwell into the country for a spectacular appearance in August of that year at an international conference of National Socialists hosted by Jordan in the Cotswolds. The gathering resulted in the formation of the World Union of National Socialists, of which Jordan became its first commander. Several weeks later, Jordan was arrested and imprisoned for organizing an elite formation of the Movement, as well as for a "Hitler Was Right!" speech he gave in London's Trafalgar Square.

He was again imprisoned in 1967 for publishing and disseminating literature on the Jewish question and the threat of colored immigration. In the 1980s, Jordan revived Gothic Ripples, originally Arnold Leese's publication, as his personal newsletter.Over the years the redoubtable Jordan was subject to numerous house searches and prosecutions, all stemming from alleged violations of Britain's notorious racial speech laws, in the course of which irreplaceable books and manuscripts were seized. Despite it all, he remained steadfast and indefatigable in his convictions and in defense of the National Socialist cause. Colin Jordan was an honorary member of the NEW ORDER and recipient of its highest award, the Loyalty Badge. He was a close friend of the current head of the World Union of National Socialists, Matt Koehl.

Jordan lived on a small farm estate near Harrogate in the Yorkshire Dales. He is survived by his wife Julia and a stepdaughter.
NOW, GOOD AND FAITHFUL WARRIOR, ENTER VALHALLA! 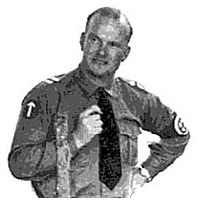