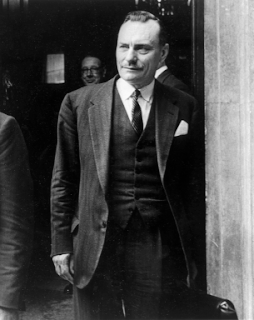 "We must be mad, literally mad, as a nation to be permitting the annual inflow of some 50,000 dependants, who are for the most part the material of the future growth of the immigrant descended population. It is like watching a nation busily engaged in heaping up its own funeral pyre. So insane are we that we actually permit unmarried persons to immigrate for the purpose of founding a family with spouses and fiancées whom they have never seen."


Powell recounted a conversation with one of his constituents, a middle-aged working man, a few weeks earlier. Powell said that man told him: "If I had the money to go, I wouldn't stay in this country… I have three children, all of them been through grammar school and two of them married now, with family. I shan't be satisfied till I have seen them all settled overseas." The man finished by saying to Powell: "In this country in 15 or 20 years time the black man will have the whip hand over the white man."
http://en.wikipedia.org/wiki/Rivers_of_Blood


The Rivers of Blood speech was a speech about immigration and anti-discrimination legislation in the United Kingdom made on April 20, 1968 by Enoch Powell (1912-1998), the Conservative Member of Parliament for Wolverhampton South West.
http://www.telegraph.co.uk/comment/3643823/Enoch-Powells-Rivers-of-Blood-speech.html

PS1. Keep in mind David Lane`s words and about how they plan the GENOCIDE of the White Race through immigrations, race-mixing e.t.c.