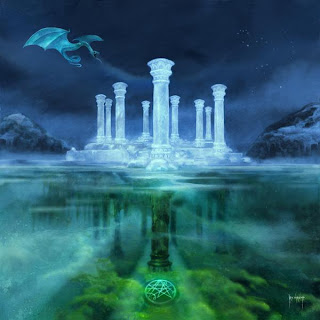 A good start for this year. I keep hearing since 1-2 years now about the Return of Mythological Occult Metal masters ABSU. I like this band since the release of their debut masterpiece "Barathrum V.I.T.R.I.O.L." and i`ll be always intrested in their stuff despite their line-up changes or delays of releasing their albums . Coming back to the subject, i`m always very sceptical about such "returns" , especially if the band have a radical change in their line-up status. So whats better to download and listen the album first before trying to invest any money on it. ABSU newest album simply titled "Absu". I just heard and i can assure you that its a great come-back for sure! There is not much change in their musical and lyrical direction. "Absu" is a perfect follow-up to their previous album "Tara". To my eyes and ears ABSU had always a unique approach in their concept and with "Absu" proved that they managed through their years to keep untouched this aspects that made them so special in their long existance. Have not read the lyrics of the new album yet, but judging from the titles , fortunately there is not a change. Also the cover of the album is in my opinion looks great (The unique lyrical/musical concept i mentioned before). Reminds me some Heavy Metal bands from the early 80`s or some progressive 70`s stuff. A really magical cover that goes perfectly hand in hand with the the rest aspects of this full-length. Kris Verwimp did an outstanding piece of art again!

If you like the previous works ABSU before be sure to check out this album.
official myspace : www.myspace.com/absu