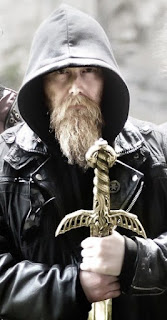 An interview with musician and writer Byron A. Roberts

Byron A. Roberts, mastermind behind the bombastic British metal band Bal-Sagoth, is one of the most talented individuals active in the sword and sorcery field today. Although it wasn’t until the past few years that his stories saw print, he’s been developing characters and concepts for quite some time. Just take a look at a booklet of a Bal-Sagoth CD and you’ll see that the lyrics are basically short stories themselves! His latest work is a collaboration with Matthew Knight and Howie K. Bentley, written round-robin style. Let’s learn more about one of the men behind Karnov: Phantom-Clad Rider of the Cosmic Ice.

Which came first, your love for heavy metal music or sword and sorcery fiction?
The sword & sorcery obsession definitely came first. I became fascinated by fantasy stories, mythology and comic books at a very young age. The Marvel comics adaptations of Conan from the 1970s became my gateway to discovering Howard’s prose stories. From there I also began seeking out other authors of sword & sorcery. Additionally, the work of artists such as Frank Frazetta, Boris Vallejo, Chris Achilleos, Sanjulián, Earl Norem and the Brothers Hildebrandt absolutely captivated me. The late 70s and early 80s were a great time for fantasy paperbacks, comics and movies. I read a lot of fantasy and science fiction prose when I was growing up. Then in my mid-teens or thereabouts, I discovered metal. To me, metal and sword & sorcery seemed intrinsically linked. Bands such as Iron Maiden, Manowar, Celtic Frost and Bathory dealt with fantasy oriented lyrical topics to varying degrees, and those were the kind of bands I was drawn to fundamentally. In the late 80s, I started thinking about actually forming a band which would fuse my passions of sword & sorcery and metal. 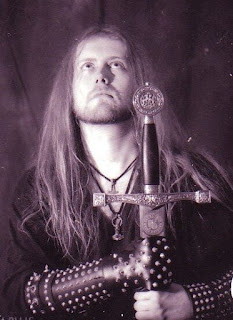 When was Bal-Sagoth formed? Was any of the lyrical content (characters, settings, etc.) already developed beforehand?
I first came up with the idea for Bal-Sagoth around 1989. A great deal of the lyrical material which would eventually find its way into the Bal-Sagoth songs was written around that time or earlier. Many of the Bal-Sagoth stories started out as prose pieces I’d written which I then adapted into a lyrical format. I created many of the recurring characters during that period, such as Caylen-Tor, Joachim Blokk, Lord Angsaar and Captain Caleb Blackthorne. The Bal-Sagoth lyrical universe was very much a distillation of the material I’d loved since childhood… novels, short stories, comics, movies, etc. I knew I wanted the lyrics of the band to be a vast, interconnected narrative concept… with each song thematically linked to a varying degree. I developed a detailed history for my lyrical universe, and also began drawing maps of the various countries and continents in which the stories would take place. I had a few names in mind for the band at first, but ultimately I decided to go with Bal-Sagoth, which is from the works of Robert E. Howard. I’d always loved that name and it seemed to suit the overall concept of the band perfectly. Plus, Howard is one of my primary literary influences. Of course, finding musicians who were willing to become a part of this project was far more difficult than actually conceiving it! 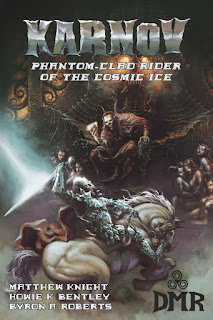 In Karnov, your parts came last. Was it challenging to write about characters you didn't create?
Working on Karnov was immensely enjoyable and it was an incredibly compelling project to embrace. I loved receiving the previous chapters by Matt and Howie and seeing what epic perils the character was facing. And it was great fun for me to then decide on how to wrap up the tales and bring everything to a suitably rousing conclusion. Each of us brings something unique to the mix with our styles and overall approach, and I really hope the fans have as much fun reading the book as we had writing it!