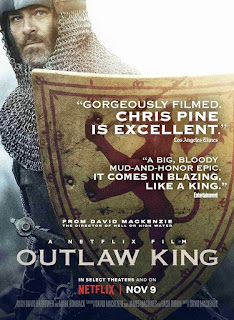 Despite the fact that the last (at least) 15 years I`ve refused to submit in the general Hollywood Anglophobia of "evil england vs every good man/state/army of this world", especially concerning anything from the early to late Medieval and Renaissance historical periods. Without a doubt there has been really good films but most of the times openly one-sided (See films like Braveheart, Rob Roy etc). Not that English rule was the most noble of all at times. Quite the contrary, but still the majority of the films focus only on that. It gets boring.

Knowing all that, I decided to give a chance to a new 2018 film named OUTLAW KING that released few weeks ago. Its about the story of Scotish nobleman Robert The Bruce and its scenario based on real historical facts. His fall and rise as a king starting in the period from the death of William Wallace and onwards. 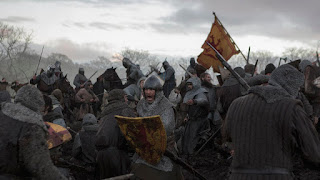 I had low expectations. But to my suprize this film turned really good!
Excellent photography & directory. The story as it unfolds, the outstanding filming locations across Scotland and England , the very realistic combat scenes (both man-to-man and between armies as well) made this movie into a 2-hour watching pleasure.
For sure among my top 5 for 2018.