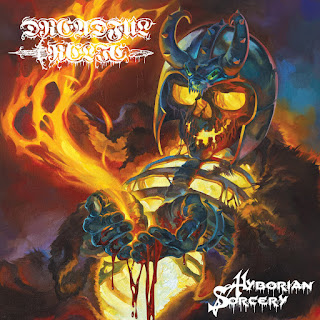 Do you ever get sick of listening to Celtic Frost? No? What about Hellhammer? No, too, huh? Well, since they don’t exist anymore, can I offer you another band whom I believe you will enjoy very much? Have I got a deal for you!
Their name is Dreadful Relic, and they released a superb CF/Hellhammer/first wave worship album in February. Even though the cover of the album looks more like a melodeath band (or something…I’m not really certain honestly), this is pure, simple, battering first wave black metal at its finest. The band’s biggest strength perhaps might be seen as its biggest weakness by some: these guys really sound like Tom G. Warrior and co. I mean, if the vocals weren’t different, I might think this was some lost CF release around the time of To Mega Therion. Fortunately, these guys have unique, deep, black metal vocals rather than Tommy G’s signature shout. It works really well in this context and I found it enjoyable throughout. Warm guitars punch out riff after riff of Celtic chaos that will have you banging your head from start to finish. They do an excellent job of mimicking the “is it black metal or is it something else or is it just its own thing” riffs of CF and Hellhammer. You’re asking if there are solos. Yes, there are solos, but they’re mostly just tremolo ravaged, maniacal shredders that serve to increase the turmoil. Occasionally, twisted melodies appear in the background, but these are just barely audible and are not the primary draw here. For the most part, this thing is fast paced and mean, simple and aggressive—no frills at all. The drummer just pounds away relentlessly, utilizing simple beat after simple beat to increase the power and force of the almighty riffs. The bass kind of just fuzzes in the background but provides a nice backdrop for the rest of the band. Occasionally one is provided a break from the madness—these come in the form of an intro (“Crom’s Ruinous Winds”), an interlude (“Stygian Oath”), and an outro (“Black doom in the Serpent’s Nest”). Otherwise, be prepared to be mutilated in just the most pleasant way.
I really wish I could write more about this album, because it is high quality, but it’s very difficult to move past “it sounds like Celtic Frost,” because there really isn’t a better way to describe these guys. This album is something special and something you’ve heard before at the same time. On the one hand, we’ve heard this done better by Celtic Frost. But on the other hand, nobody could expect someone to do To Mega Therion better than them, and these guys do it better than most. If you’re looking to re-enter the Circle of the Tyrants, give this one a shot. 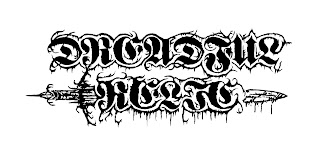 For those who have read the interview with this band featured on the tenth edition of Psicoterror, will know that Dreadful Relic are not a band with the premise of re-creating a sound already exploited far and wide through the entire history of Black and death metal. They do it for a reason, though. The link between the archaic elements within black and death metal in lyrics are music are intertwined and they simply belong to each other. Dreadful Relic explores not only the foundations of Black and death metal musically, but also they have explored and dive deep with the pre-historic writings of Robert E. Howard which served perfectly to illustrate and justify their musical introspection. “Hyborian Sorcery” is a journey to the foundations of ancient metal and ancient mythical realms, where Gods, Men, Demigods and Demons interacted in such a way of Barbaric Conflict and struggle for domination. In order to properly illustrate this, they have chosen to go into the very roots of metal, being Hellhammer / Celtic frost and old Samael their main influences. Yes, their songs may become intuitive for those who are familiar with these bands, but they do manage somehow to impress with unexpected elements within their music. As with previous releases, they have also included a few ambient pieces to set the mood of the record and surprisingly they work well.
Dreadful Relic is a band which is showing to the new generations the primigenious and basic elements which forged Black and Death metal, and making everything anew as a remembrance of what Archaic metal was, and how this can’t be changed with Time, even if trends may come and go. 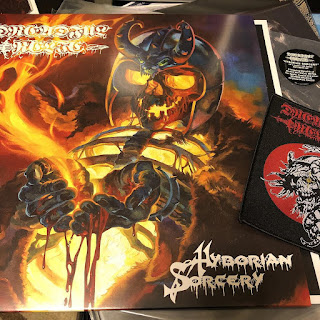 When I put this record on I wasnt sure what to think. It was great, it was evil, and it was nostalgic. But.. What is this?
I am reminded of Celtic Frost when I listen to this album, for it's one of those bands who clearly have a blackened twost on classic genres, with a heavily distort but smooth guitars delivery. Yet, this album is anything but a Celtic Frost worship band.
The bass guitar is so crushing, the distortion serves as a solid backdrop for this energetic and ferocious riffage. It's like being kicked in the ribs at a moderaye pace, just casually bein brutalized.
The vocals really sell this album. It's like a mix of Tom Warrior and (ND)
As mentioned, the nostalgia is worth talking about. I love how many first wave black metal this album crams in without being another copy / worship band. The main riff in the title track for example, reminds me loosely of Slayer's "Die By The Sword"; "The Runik Citadel" reminds me loosely of Celtic Frost's "Procreation of the Wicked"; "Gravedigger of a Rotten World" reminds me of a Welcome to Hell era Venom song.
I mean this album is a buldozer of a fucking album and has such a carefree riff style with threatening and agressive vocals. I just love how nostalgic, while refraining from being another clone, this album is. Triumphant little bastard