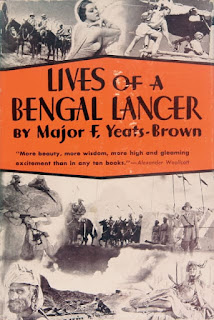 The "The Lives of a Bengal Lancer" is a 1935 American film based on the autobiography of the British officer Francis Yeats-Brown. In the article below you`ll see the astonishing history behind this film, its admirers and the impact it had in the National Socialist world. 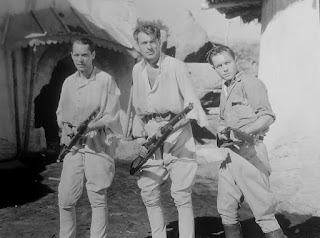 "handful of Britons holding a continent in thrall. That was how a superior race must behave and the film was compulsory viewing for the S.S."
ADOLF HITLER - 1937

Henry Hathaway's 1935 movie Lives of a Bengal Lancer is largely forgotten today. Most people would associate  'Bengal Lancer'  with an Indian restaurant or an Indian cricket team. Yet in its time the movie was the equivalent of aSpiderman movie today. It remains famous for making a longtime box office star of Gary Cooper. And it was one of the early 'buddy movie' successes, still popular today, in which a group of friends boldly fight incredible odds in the cause of country and glory.....

The movie was based on the memoirs of Francis Yeats-Brown (1886-1944). Published in 1930, the book covered the author's time in the Bengal Lancers in the decade before World War I. Yeats-Brown had a privileged upbringing (Harrow and Sandhurst), and joined the British army in India. He soon became part of the Bengal Lancers, serving in the turbulent North West Frontier. During World War I Yeats-Brown served in the Royal Flying Corps in France and Iraq, gaining a DFC for bravery. He was a prisoner of war for two years after beiong captured by the Turks. After the war he reurned to the Indian army for four years. He then became a journalist....