A Chess Match With Death 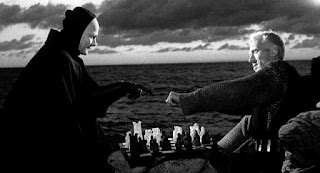 The chess match with death himself. Thats a famous scene immortalized in Ingmar Bergman's timeless masterpiece "The Seventh Seal".  A very intresting trivia I found out lately is from where Bergman inspired by this , to create a scene of so crucial importance for unfolding the whole movie story. 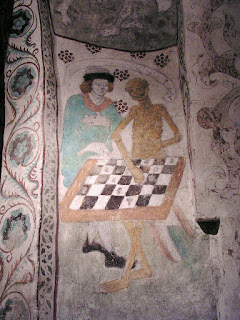 "The church is best known as one of the churches with mural paintings by Albertus Pictor (died 1511). The ceiling frescos are from the 1480s and, unlike many of his other works, were never whitewashed over. They include a picture of a man playing chess with Death, a motif that inspired Ingmar Bergman to a famous scene in the movie The Seventh Seal. The motif is very unusual, known only from one other source"
Source : Wikipedia

PREVIOUS RELATED POST:
Ingmar Bergmann lost the chess match with Death at the age of 89