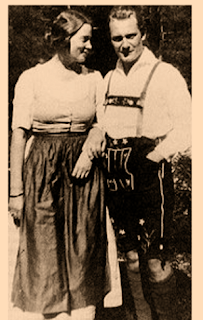 "It was June 20, 1934, the day that Göring had appointed for the reburial of Carin’s remains in the lakeside mausoleum he had built for her. Few pharaohs’ wives can have been buried with more solemn ceremony. A special train bore the pewter sarcophagus across northern Prussia from the Swedish ferry to the railroad station where Goring and Hitler, both hatless and somber, awaited her arrival. At Göring’s command, towns and cities along the train’s whole route were cast into deep mourning. Teenage Hitler Youth units stood at attention on their local railroad platforms; the League of Maidens lined the bridges, saluting and showering flowers; flags were dipped as the train slowly passed, and thousands of women lined the railroad tracks to pay homage to their prime minister’s long-dead wife. 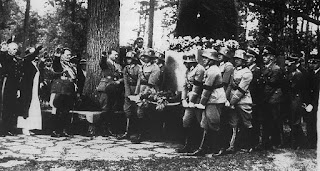 The scene at Carinhall itself was like the setting for a Bayreuth opera - the thin summer mists steaming slowly off the still waters of the lake, the ranks of soldiers standing in motionless array, while Richard Wagner’s rich funeral music throbbed and droned among the hazed conifers. Göring had invited Carin’s relatives, along with hundreds of diplomats and politicians, to witness this moving evidence of how beholden he still was to her memory. To the blare of hunting horns and trumpets, and the answering bellows of Hermann’s future trophies grazing in the forests, a dozen strong men groaned and strained to manhandle the sarcophagus down into the granite mausoleum. Afterward, Göring led Hitler down the steps alone. Both men had known Carin well, both were saddened that she had not lived to see the National Socialists triumphant." 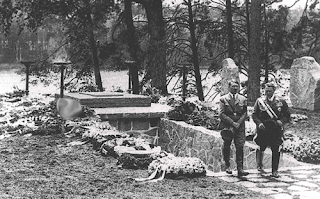