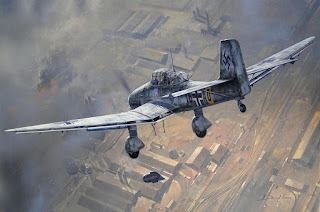 "A less obvious modification was one that, nevertheless, endowed the Stuka with a fearsome reputation: each undercarriage leg was provided with a mounting for a siren, a so-called Jericho Trumpet. This produced the Stuka's characteristic diving screece which had such an adverse effect on enemy morale as the dive-bombers supported Germany's early conquests in 1939-41."