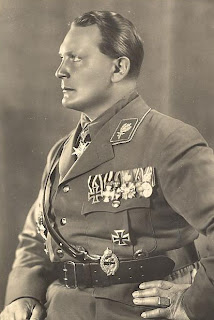 Time for a small book review.


I think everyone who reading this blog know exactly what my point of view about the 3rd Reich, the NSDAP and the WW2 in general. I always like to read in-depth biographies from the leading personalities of signifact periods in European history. So far i never had the chance to read a whole book about one of the most controversial persons, the Reichsmarshall Herman Goering.
I had read several articles here and there about the Life and Death of Herman Goering. To be honest I never gave so much attention to learn more about his life from the things I already knew. The last 2 years i`m watching almost daily The History Channel. Especially at evening or late at nights you can see several documentaries about the Nazis. Lately I noticed a special intrest of this channel about Reichsmarshall and especially what happened during this parody named "Nuremberg Trial".

"Fanatic hunter", "Drug(morphine)-addict", "arrogant" , "corrupted", "opportunist". Yes, that was some words that oftenly someone hearing even from people of the Nazi party during 1933-1944. But what about before and after? This was the period oh life that mostly i wanted to read about. If he was so big opportunist why to choose to join the Nazi party long before came to power? Why to choose something so uncertain and not join fex the mainstream parties of that time that success with a man of his fame and career was 100% sure.

I knew that the famous British historian David Irving wrote propably the most complete ever biography of Herman Goering. Some years ago a Greek publishing house bought all the rights of Irving`s books, traslated them and released the Greek version of them. At first i thought they are gonna release only a few as Irving in most countries considered as "Nazi"( Judging from his writings, obviously the man is not NS or something like this, yes perhaps sympathetic towards some 3rd Reich leaders but this definately make him not a "Nazi") and his books are almost non-existant or quite rare to find in the major bookstores. One day and without expecting it for my big suprize i saw the Greek version of Irving`s "Goering, A biography".


Few weeks later in a book exhibition I found the chance and asked directly the publishing house what books of Irving they plan to release. They told me that all books of Irving will be released in Greek and next year they will do "Goebbels. Mastermind of the Third Reich". Really, I can`t wait for it!

Coming back to the book, "Goering, a Biography" is definately the most detailed biography of Herman Goering that you can find around and seriously I doubt that there will be ever something similar about him. David Irving got access to several rare and even unseen before documents (Diaries e.t.c.) about Goering and his close people/relatives. (F.ex. you`ll find some really intresting details about his first wife and her family or his years during his childhood and as pilot in WW1)


Once , during a historical conversation i had with a friend about WW2, Nazi Leaders e.t.c. a friend asked me about Goering "Do you really like this man?" i replied "yes" by knowing his fatal mistakes but my answer was the result of having huge respect from the way he died. He decided to make the last service to his folk and land by standing on his feet in front of his enemies and spit on them during this joke (By any apsect) named these days as "Nuremberg Trial". Yes, it seems that during 1933-1944 he was not able to understand the historical mission of National Socialism and act accordingly, but I believe with his way of life in the last days in prison and his death he showed an example of man loyal to his beliefs and defiant in face of his enemies.


In the end, I fully reccommend this book to everyone who intrested to learn more about this man. For sure, there will be things that you`ll not like to hear or you were not aware of, this is what makes this book so unique and amongst the best around!!!