The tragic history of a photo 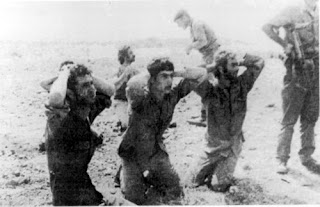 The photo you see above and which i`m sure, you the readers outside Hellas watching for first time is taken from the 1974 war between Cyprus and Turkey when Turks (With the back up of Americans as usual) invaded in Cyprus. Its five Greek-Cypriot soldiers captured by the turkish army. To me and to most Greeks who know their history this photo is of special significance as we grew up with it and was to us something like a "symbol" , something to always remember the our timeless enemies from the ottoman empire to the present day. Yes when every July remembering this unfortunate war and the betrayal of Greece by local and Cypriot politicians and the struggle of Cypriots and volunteers from Hellas which despite all difficulties fought bravely, this photo is the first thing that come to our mind.
Those five soldiers were officially reported as "missing" , few days ago the sad truth came to the light :
Remains of missing Greek Cypriot soldiers found
By MENELAOS HADJICOSTIS, The Associated Press
NICOSIA, Cyprus —The remains of five Greek Cypriot soldiers who appear in an iconic 1974 photo surrendering to invading Turkish troops were found in an abandoned well in the Turkish Cypriot north, officials said Monday.
The soldiers' families and Greek Cypriot officials called the photographs proof that they were murdered in the custody of Turkish troops.
It's a cold-blooded execution," Andreas Hadjikyriakos, a brother of one of the soldiers told state TV. "I can never accept this."
The Turkish Foreign Ministry had no immediate comment.
Turkey invaded 35 years ago and split Cyprus into an internationally recognized Greek south and a breakaway Turkish north in response to a coup by Athens-backed supporters of union with Greece. Around 1,500 Greek Cypriots and 500 Turkish Cypriots vanished during the invasion and in interethnic clashes in the early 1960s.
The photographs became a symbol of the decades-long bids by relatives of the missing to trace the fates of their loved ones.
The remains of the soldiers and 14 other people were exhumed from an abandoned well in late 2006 near the northern village of Tziaos, Elias Georgiades, an official with the United Nations-led Committee on Missing Persons, said. He said the soldiers' families were informed Friday that the remains had been identified...."
Personally i`m not so suprized as i know the turks never change through the centuries. The irony is that since years now its the "Greek" goverments and politicians from all sides (from left to the right) who support fanatically the entrance of turkey in EU and the so called "Greek-turkish friendship" something which is an insult as its many generations now that our grandfathers keep fighting hard against this plague. Thanx that the major part of the common Greek folk ( Both in Hellas and Cyprus) doesn`t believe this bullshit. Too much blood is spilled and the memory can`t erased.
P.S. The mother of one of the soldiers in the photo spoke to the TV news yesterday and described her last conversation with her son:
"It was early in the morning when my son (which recently finished his studies) woke up , i asked him "where you go my son?" and he replied " Mother, turks invaded in the country , i`m going to the army as a volunteer to take the arms and fight for the fatherland"
Whats better death than the one who dies in the service of his Folk and Land?
Posted by T.K. at 23:34