The Swastikas of Lambach Abbey 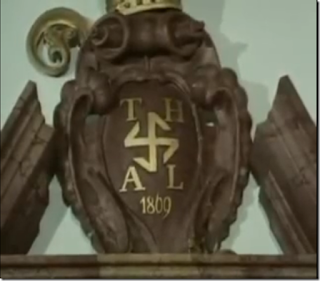 "In my free time I practiced singing in the choir of the monastery church at Lambach...."

"Visitors to the monastery have observed one curious and memorable detail. In six or seven places - over the ornamental gateway, over a stone well, and over some of the stalls in the abbey -  a swastika appears. The swastika was included in the coat  of arms of Abbot Theodorich Von Hagen [Hagn], who rules over the monastery in the fifties and sixties of the last century. In German  a swastika is a Hakenkreuz ( hooked cross), and evidently the abbot regarded it as a pun on his own name, the difference between Haken and Hagen being so small that it might passed unobserved. The abbot's swastika inspires no fear: it was carved delicately and simply, and the only emotion it conveys is one of suprize that an abbot should amuse himself with such an obvious pun. Adolf, who was now living in a well-desgined building at the corner of the Linzerstrasse and the Kirchengasse, could see the swastika from the window of  his father's appartment, and he saw it more clearly when he went to school. Abbot Thedorich Von Hagen's swastika was probably the ancestor of the Nazi Hakenkreuz"

ROBERT PAYNE - The Life and Death of Adolf Hitler 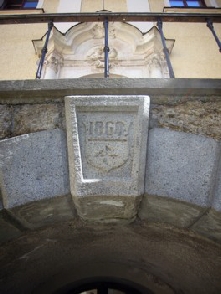