Europe 2017: Talmudic witchhunt to the enemies of Kalergi Plan 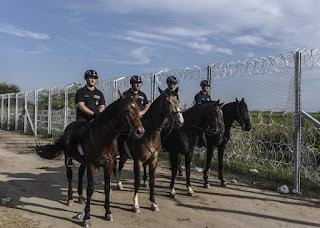 Hungary is a Nation that during the africano-asiatic invasion of the last years stood proudly on its ground, defending their National identity and sovereignity as an independed state with secure borders for its own people. Openly refused to be in the line of the EU-puppet states. Despite all our agreements , Viktor Orban showed courage and will for his own country and judging for his various statements, he seems to understand whats the real game in European politics these days. The Kalergi plan.

Last April the veteran German patriot Horst Mahler, after an openly political persecution, and even an attempt against his life, escaped Germany, seeking asylum in Hungary.


-THIS IS A VIDEO THAT EU TREASON GOVERMENTS DONT WANT YOU TO KNOW. SPREAD IT AROUND AS MUCH AS POSSIBLE -

Some days ago the Hungarian court denied him the political asylum.
Read the full story here

As it seems that Soros agenda still going strong in the nowadays Hungarian state....