CONAN - The Return of The Legend 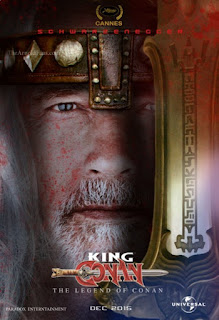 Its been sometime now since the announcement of a sequel of the classic CONAN 1982 & 1984 films ( The 2011 pseudo-conan doesn`t count ofcourse!). Few days ago , at 24th of May, an interview posted with the two producers of this follow-up movie. A hard task for sure and my hopes are not that high. But at least in words it seems they are on the right path. We have to wait and see...

Here is the interview. Taken from TheArnoldFans

While it is an exciting time for Arnold fans with Terminator Genisys on the rise, let’s not forget that Schwarzenegger’s next film project is “what is best in life”! As if we weren’t already pumped enough for The Legend of Conan, we have new word from Chris Morgan and Fredrik Malmberg, the film's producers, telling us the greatest Schwarzenegger cinematic experience is yet to come!

While these gentlemen are fans of Robert E. Howard’s Conan tales, the goal here for The Legend of Conan is to revisit the barbaric world of John Milius. This will not be a reboot nor will it be given a tame film rating, unbefitting of a bitter, barbaric king. The Legend of Conan will in fact be a sequel to Conan the Barbarian, giving us Arnold’s character 30 years later: aged, pissed and battle ready. 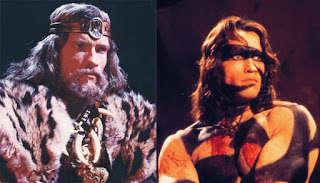 TheArnoldFans: Can you tell us a little about the tone of this film? Some of your projects (Fast and the Furious films) have been very entertaining, action-heavy, popcorn films. Do you feel there is room for a light-hearted Conan, or is the goal here a tone to be more gritty, dark and Oscar-worthy, like Gladiator?

Chris Morgan: A light-hearted Conan?! CROM! No. Our tone is a logical extension of the character established in the ’82 film…but 30 years later. When we meet him again, Conan has been many things over the course of his life — a thief, a warrior, a pirate, a king, a legend — and is now an older man. Think Unforgiven…with a sword-wielding barbarian.

TheArnoldFans: Is it difficult to step into the mindset of John Milius’s Cimmerian world? If you’re aiming for a Milius-inspired script, what types of imagery, animals, cultures and sounds are necessary?

Morgan: Milius was a visionary. And a hero of mine. He established a milieu that is stunning and violent and clear — incomparable. The goal, the dream, is to live up to his world. To make it worthy. And to expand on it in a truthful way that audiences will embrace. We’re very lucky that the architects of this new film — the writer, the producers, the studio and most of all, Arnold — who is Conan — are all first-generation fans who either worked on the film or who came along for the ride, cheering from their theater seats opening night. We plan nothing more than to immerse ourselves in the world Milius envisioned from Robert E. Howard’s unforgettable stories and Frank Frazetta’s stunning artwork. I can’t give specifics (nobody likes a spoiler!), but know we are honoring the locales, the religions and the traditions of the ’82 film.

TheArnoldFans: I’m sure there must be several characters from the original Conan film coming back. Roughly how many characters are coming back in your Conan script (without naming names)?

Morgan: Without naming names…it’s at least three. And you’re gonna love them! ;)

We have no idea who these other three cast members are to reteam with Conan but here are a few we could imagine: The Wolf Witch (Cassandra Gave), Subatai (Gerry Lopez), Red Hair and the Pictish scout (Franco Columbu)! Sure, The Wolf Witch was tossed into the fire, however, her spirit flew away, possibly entering another form? Or what if Conan decides to free all of the slave children from Red Hair’s Wheel of Pain? Or will Schwarzenegger come face-to-face with Franco Columbu’s character, the very scout who led Doom’s riders to slaughter Conan’s family? I pray to Crom that Subatai will run across the sand dunes to Conan’s aid.

Next we chatted with The Legend of Conan producer, Fredrik Malmberg, who tells us he wants to get this project going this year and that the film will look spectacular!

TheArnoldFans: Have you considered any new locations for filming Conan in addition to Spain?

Malmberg: We have been assaulted by film commissioners from all around the world who want Conan to be shot there! At the end of the day, it’s a combination of cool scenery and economics. We have visited Spain and it’s a very versatile landscape and has great crews. We also visited Colombia, and Universal has experience shooting all around the world, so rest assured it will look spectacular.

TheArnoldFans: With Arnold fans, Conan remains the top fan-favorite film for Arnold to do next. Why do you feel a character of so few words and showing maximum brutality is such a beloved character? And will Conan be as blood-thirsty as the original 1982 film, or has he become even more (or less) brutal?

Malmberg: Our marching orders from the studio were to create a film worthy as a successor to the 1982 film, which was pretty brutal. To Conan it’s not about fancy sword moves; it’s about the fastest and most effective way of disposing of your enemy. A dance of death, maybe, at least primal. In my opinion, Conan is beloved because of his political incorrectness. He doesn’t think, he just acts. People can relate to the freshness of somebody who doesn’t give a damn about civilization — in fact, despises it. At the same time he is a magnificent fighter, leader and friend.

TheArnoldFans: Is the goal to begin production of The Legend of Conan immediately following Arnold’s Terminator Genisys worldwide tour this year?

Malmberg:  I think this fall would be perfect. The sooner the better!

"It is the greatest honor to be 67 years old and to still be asked to come back into all those franchises,” Arnold tells TheArnoldFans. "Whether it is the Terminator movie or it is now Conan, it is fantastic! As a matter of fact, when I get back to Los Angeles, i'll be getting the final script and then I will see it for the first time. But with Universal Pictures, I've tried to convince them now for 20 years to go back and continue with the Conan series and they were not as enthusiastic as I was. But then later, new management came in at Universal and they saw it entirely differently. They came to me right away and said they want to pick up the Conan series and to look at some writers and let's get going on that. So we've been working on Conan and I'm really excited to be working on this - to do another Conan movie and hopefully it will be soon!" 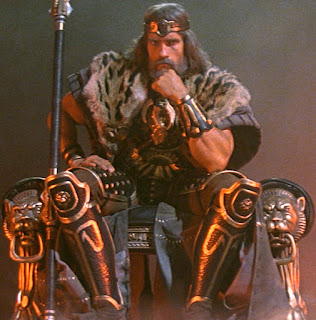 Previous Related Posts:
"The Legend of Conan" Coming in 2014
Conan The Barbarian (1982) - Behind The Scenes
The Last Stand of Basil Poledouris - Conan The Symphony