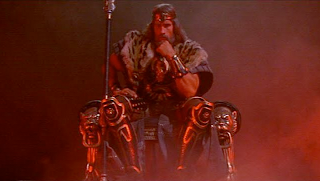 
"I’ve watched this disaster unfold all last week, then the formal detailed announcement came Friday as posted on the Deadline website. Universal, in conjunction with Paradox, has a new Conan movie in the works with Arnold Schwarzenegger returning at age 63 to reprise his role as Conan. The new film, being fast tracked for a 2014 release, will be titled The Legend of Conan. Paradox’s head honcho Fredrik Malmberg describes the premise of the film in this excerpt form the film’s announcement:

"The original ended with Arnold on the throne as a seasoned warrior, and this is the take of the film we will make… It’s that Nordic Viking mythic guy who has played the role of king, warrior, soldier and mercenary, and who has bedded more women than anyone, nearing the last cycle of his life. He knows he’ll be going to Valhalla, and wants to go out with a good battle."

"This movie picks up Conan where Arnold is now in his life, and we will be able to use the fact that he has aged in this story. I love the property of Conan so much that I wouldn’t touch it unless we came up with something worthy. We think this is a worthy successor to the original film. Think of this as Conan’s Unforgiven."

Said Schwarzenegger : "I always loved the Conan character and I’m honored to be asked to step into the role once again. I can’t wait to work with Universal and the great team of Fredrik Malmberg and Chris Morgan to develop the next step of this truly epic story."

BLOG`s COMMENT : Dont know what really to expect from this. We will wait see...