A View Into The Depths Of Darkness 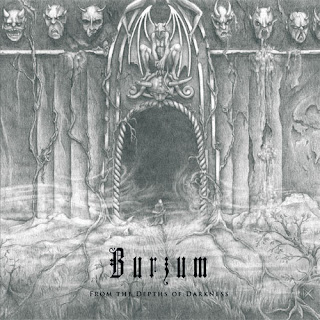 Usually on this blog i try to avoid (As much as possible) reviews on music. The main reason i`m writting this is that there was too much said and written about the latest BURZUM`s work "From The Depths of Darkness", which is a compilation of old tracks re-recorded in 2010.

Starting this, i have to say that i`m not any blind-fan or whatever kind of sheep who praise its fave bands no matter what recording they put out. On the contrary, to the band i truly like, my expectations are always higher and i`m the first who gonna criticize them.

To my eyes , from all those that you see around in forums e.t.c. writting about new BURZUM album, there is three categories of people. 1st: The typical liberal "goat-fago-war-metal" or "anti-cosmic-kabalah-heavy metal-rock" hippies who always seek an excuse to speak against Burzum , not because of the music itself but because Varg with his words/interviews oftenly offend their feelings and their egalitarian world-view. 2nd: The people who listen Burzum only as music and nothing further than that, newcomers who find out the old bands by youtube clips that their g/f (And oftenly boyfriends) posted in facebook. Probably you`ll see some of them changing their minds in a couple of months speaking about a "great album". 3rd: The people who truly like and supported Burzum since the early days.Though, thats the 5% of people in all those three categories. Keep all this in mind before read any opinions here and there.

Coming to the music. All the material recorded as usual in Grieghallen.
Its has a Strong , powerful production and at the same time without sounding modern and plastic. The "new" type of vocals fits perfectly. An attempt to use the old type of vocals perhaps would made the record sounds more or less like a parody. The amazing guitar lines are the strongest part in this album i think. Also a good idea was to add three introductions before certain tracks and in the change from one album to the other.

Coming to the art, the cover looks fine the same goes for the painting inside. Obviously refers to DET SOM ENGANG VAR with an obvious personal symbolism on the paths that Varg walked in his early days as an artist . When i first heard about this compilation and without see any layout, to be honest i was a bit "scared" in the first place cause the layout in the recent re-releases of the old Burzum albums looks really horrible.

After hearing the album several times , i came to the conclusion that only BURZUM can play BURZUM. The tracks doesn`t sound like covers that easily another band can do. On this album the magic and coldness of the old days is still there!

As Varg already announced there will be a part II with tracks from HVISS LYSET TAR OSS and FILOSOFEM. I hope he will not change his mind about it and also finally to include "Et Hvitt Lys Over Skogen". This track truly deserves a proper treatment.

All in all , buy this , its a document, the history of TRUE NORWEGIAN BLACK METAL!

"The Fire in the Sky is Extinguished
Blue Waters no Longer Cry
The Dancing of Trees Has Stopped
The Stream of Freshness from Cold Winds..."