Who Were The Strasser Brothers? Part 3 (Last One)

"Material from Otto Strasser went to make up the book Der Führer which was issued in the name of "Konrad Heiden", which, along with Rauschning`s above-mentioned collection of lies, was used in formulating the indictment of the International Military Tribunal at Nuremberg whereby leading Germans were put to death and barbarously so by slow strangulation. Strasser material was also made much use by Dr. William C. Langer as acknowledged in his book The Mind of Adolf Hitler (Secker & Warburg, London, 1972), a piece of wartime propaganda he was assigned to concoct by the American dirty tricks department known as the OSS. The kind of help muck-spreader Strasser gave to Langer can be distinguished from Strasser`s own offering of ordure entitled The Gangsters Around Hitler (W.H. Allen, London, undated but on British bookstalls in the middle of the war). Tpical of its filth is his tale of a film made, he claims, of two titled ladies from the War Office executed for espionage:..."when Hitler is unable to sleep he orders this film to be shown again and again. as he sits alone in the cellar which houses his private cinema" (p.43). Otto Strasser died in obscurity in Munich in 1974.
His Brother Gregor stayed on Hitler`s party till 1932 when his disruptive intrigues came to a head. Authors James & Suzzane Pool, in Who Finaced Hitler (p.382), reveal that during the autumn of that year the Jew Paul Silverberg, a very wealthy industrialist, secretly gave money to Gregor Strasser who, like his brother, while presenting himself as such a strict opponent of big business, was quite prepared to be on its payroll. The Jewish industrialist Otto Wolff, whom we have come across as paymaster for the Otto Strasser-Walter Stenes plot in 1931, also extended his purse to Gregor in this follwong year. "Like Silverberg, Wolff had contributed heavily to Strasser..." (p.454). When in December, 1932, General Kurt von Schleicher became Chancellor, he immediately offered the position of Vice-Chancellor to Gregor Strasser with whom he was conspiring as a move to disrupt Hitler`s party. Thereupon Hitler denounced him as a traitor, and he had to resign from the Party. This was not however, the end of his subversion. He was involved in Röhm plot two years later, and executed for this.

Ernst Röhm, head of the SA in 1934, was akin to the Strassers in political outlook, wanting to pursue a further revolution in the military sphere by elevating the SA in place of the Army, just as the Strassers wanted to regiment industry through public ownership. If Röhm had had his way, the consequent upset to the country, when Hitler had only newly taken hold of it, would very likely have meant the downfall of National Socialism. At that time the SA, two million strong, was--under Röhm behaving like increasing grandeur--running out of Hitler`s control. A loyal SA commander, Victor Lutze, brought to Rudolf Hess eye-witness accounts of Röhm`s plans to overthrow Hitler and bring about a second revolution (Hess: The Missing Years, David Irving, Macmillan, London, 1987, p.22). Also Hitler`s personal pilot, Hans Baur, in his book Hitler At My Side (Eichler Pulblishing Corp., USA, 1986, p.79) records that Hitler told the author that the Italian Ambassador in Paris had learned that Röhm was planning an uprising, and had entered into negotiations with the French who had assured him they would not interfere, and that Röhm had already drawn up his entire lists for a new goverment. The Italian ambassador had notified the German ambassador in France who had informed Hitler, who, after agonizing dliberation, had to order the arrest and execution of Röhm and his leading connspirators, thereby by his prompt and necessarily radical action very rightly preventing the vastly greater bloodshed and turmoil of civil war." 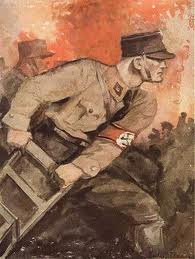