Who Were The Strasser Brothers? Part 1

During all the years of my involvement in the NS movement i encounter many types of people within and around as well in other countries. The most "strange" of them are the so called "Strasserites". It will take time to explain here whats exactly their ideas. In few words. These people follow the ideas of the so-called "Left side" of the German National Socialist party. Leaders of this side were the Strasser Brothers , Otto and Gregor. More or less these people claims that Hitler was an instrument of big capitalists and their "side" is the true revolutionary National Socialism. It was really like this? Ofcourse this sounds truly ridiculous to those who have study the history of NSDAP and its way to power. Though , for those who dont know perhaps the ideas of Strasser sounds charming. Years ago, some of his ideas sounded good to my ears as well. Though , after reading the Goebbels`s diaries (The years 1932 & 1933) i quickly realized which was the true role of Strasser Brothers. The words of a simple National Socialist like me is of no importance anyway, so i thought it will be better to put an article by someone who none can question his words, and its no other than the legendary and veteran British National Socialist Colin Jordan.
The article is quite huge and it will take me some time to sit down and typed it from the book "NATIONAL SOCIALISM - Vanguard of The Future" as i found it nowhere in the internet so to copy & paste it here. All those who intrested in the history of Nazi Party i`m sure you`ll find this article really intresting as it contains FACTS proving the role of Strasser brothers (I`ll not mention the modern Strasserites , their IQ is lower even from a Baboon) that you`ll rarely find mentioned somewhere else. NIGHT OF THE LONG KNIVES justified! 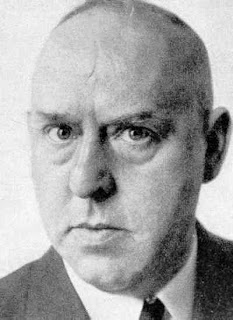 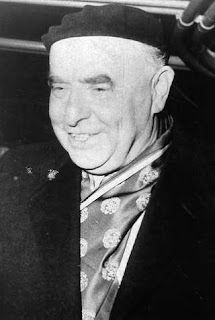 (The Emblem of the "Black Front" , Otto Strasser`s political party) 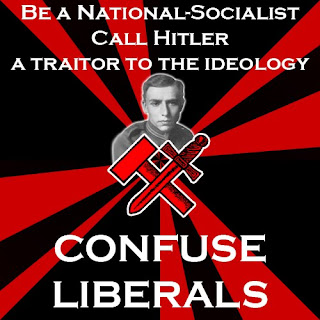 (A motto from the modern day Strasserites)

Article taken from "NATIONAL SOCIALISM - Vanguard of The Future" ,and its a part from the chapter "The Enemy Within"

"Returning to the Strasser brothers, they showed themselves to be more more of the nature of national communists than true National Socialists, attacking private ownership of property (although upheld in the NSDAP`s manifesto) in favor of mere possession on trust for the state (usufruct)--propounded by Otto Strasser in The Structure of German Socialism (1931)-- and aclaiming class warfare in the name of the proletariat. As early as 1925 Gregor Strasser in a speech in the Reichstag called for an "economic revolution involving the nationalization of the economy". On the 21st May, 1930, Otto Strasser met Hitler and demanded what he called "real socialism" and no attacks on Soviet Russia. Hitler replied: "What you understand by socialism is nothing but Marxism." The next day in continued discusion Otto Strasser demanded the nationalization of industry, to which Hitler answered: "Democracy has laid the world in ruins, and nevertheless you want to extend it to the economic sphere. It would be the end of the German economy." (Who Financed Hitler, James & Suzanne Pool, Dial Press, New York, 1978; pp. 241-42) If the Strassers had had their way, National Socialism would have never got to power, for the would have disrupted its apeal, frightening off essential support. No sensible person can really credit these men with the ability to succeed in Hitler`s place in winning and holding the hearts of a nation.
Both the Strassers were confined in their concern to the economic side of the cause to the disregard of other aspects such as the racial. This deficiency, aggravated by their distortion of the Party`s economic policy, meant that they were always a couple cuckoos in the nest. National Socialism, properly understood, has never been a mere combination of conventional socialism spiced with nationalism, and thus yet another merely materialist doctrine. It most certainly derives from its conception of the Folk a strong belief that this racial kinship justifies and decrees radical social justice , and thus the belief--increased by its belief in the Leadership Principle, again derived from its racial belief-- that private ownership and private enterprise must be suject to national regulation and supervision to ensure that its productive efficacy is fairly distributed and in accordance with national requirements; but it has never accepted the idea that nationalization of property is the only and necessary means to adequate social justice, any more that it has been prepared to tolerate the anarchic inequity of liberal capitalism as the only answer and necessary means of preserving private property and enterprise. It had always stood for reconciliation, not a conflict of private and corporate intrests. However , along with this economic outlook, National Socialism has always been far more than this, being first and foremost a racial outlook from which its economic outlook has followed."