On Sunday morning, 21st of February, Greek police raided the central political offices of the Hellenic Nationalist Movement of Golden Dawn, in Athens, with the presence of a state attorney. The investigation was a total fiasco as they did not find anything that could be incriminating evidence.

The Golden Dawn Movement is a legitimate political party that took part several times in the parliamentary and European elections. This kind of political oppression from the “socialist” government is totally unacceptable; especially if we consider that Greek police never took action against militant anarchist squats and that the judicature system never took action against political corruption of the parliamentary parties.

Nationalism is on the rise throughout Europe and the only way of the “democrats” to stop us, is to become “undemocratic”. However, we can only state that we are ready for everything and we will continue our struggle for Race and Nation! 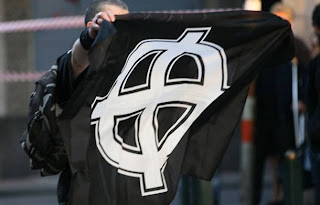